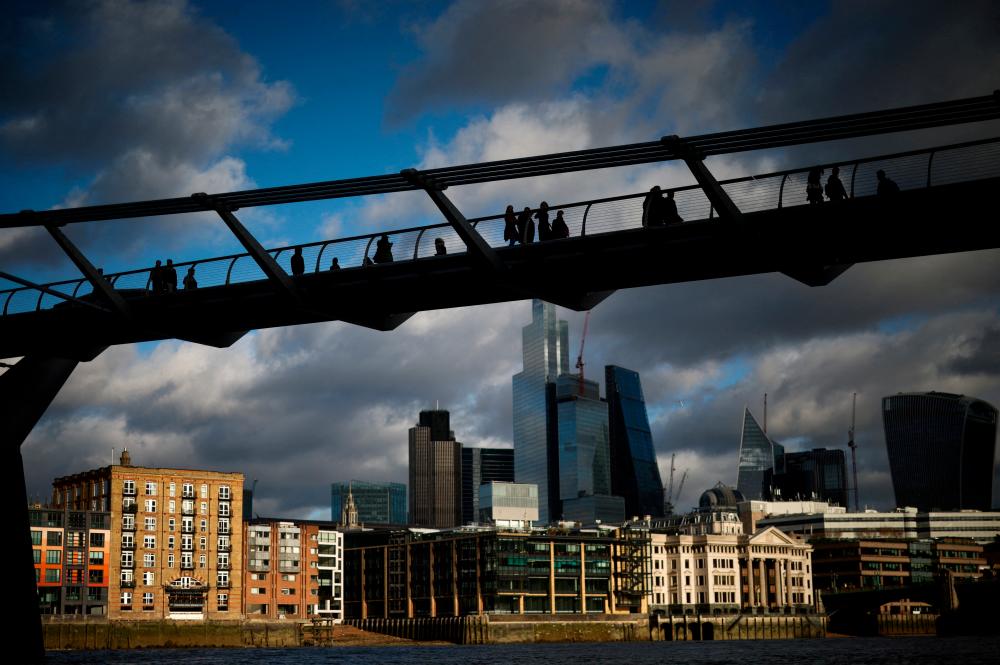 People walking on the Millennium Bridge with the City of London financial district in the background. Economists say Britain’s economy is losing momentum while its peers in the European Union seem to be gathering pace. – Reuterspic

The S&P Global/CIPS flash composite Purchasing Managers' Index (PMI) dropped to 47.8 from 49.0 in December, at the bottom end of economists' forecasts in a Reuters poll and the lowest since January 2021. Readings below 50 indicate falling output.

The fall contrasted with a slight rise in business activity in the eurozone.

“Industrial disputes, staff shortages, export losses, the rising cost of living and higher interest rates all meant the rate of economic decline gathered pace again at the start of the year,” he added.

Britain’s economy grew in November, according to official data published earlier this month, reducing the chances of two consecutive quarters of falling output – the widely used definition of recession in Europe – in the second half of 2022.

However, a widely expected fall in output this year will weigh on the BoE's Monetary Policy Committee (MPC) as it considers how much further to raise interest rates on Feb 2.

Financial markets expect the central bank to raise British rates to 4% from 3.5% next week to tackle double-digit inflation, and to a peak of around 4.5% later this year.

Finance minister Jeremy Hunt is under pressure to announce pro-growth measures in a March 15 budget statement but data published earlier today showed an unexpectedly large jump in borrowing in December, limiting his options.

The ONS said the large figure for borrowing in December was mostly down to a sharp rise in spending on energy support schemes and an increase in debt interest.

In response to the data, Hunt said it was vital that the government stuck to its goal of halving inflation – which most economists think will happen naturally, due to a base effect and lower energy prices – and growing the economy.

Debt interest accrued by the government in December totalled £17.3 billion, the highest figure for the month since monthly records began and reflecting the impact of double-digit inflation on index-linked government bonds.

Borrowing for December was some £9.8 billion more than the £17.6 billion forecast by the Office for Budget Responsibility (OBR).

However, almost all of that difference reflected a revaluation of student loans last year, incorporated into the OBR’s forecasts but not yet shown in the ONS data.

The ONS said it would record the revaluation once more definitive estimates were available.

Economists said Britain’s economy was losing momentum while its peers in the European Union seemed to be gathering pace.

Sterling fell and was down about 0.5% on the day against the euro and the dollar at 1025 GMT.

“The silver lining to S&P’s survey, however, is that it strengthens the case for the MPC to stop hiking the bank rate soon,” said Gabriella Dickens, an economist with consultancy Pantheon Macreconomics.

Britain is also in the midst of a wave of industrial action as rail workers, nurses, ambulance drivers and teachers seek pay rises that keep up with inflation.

Today's PMI data showed that prices charged by businesses rose at the slowest rate since August 2021, although the increase was still steep by historic standards.

Costs rose at the slowest pace since April 2021, as energy prices fell, though wage increases remained significant, while optimism about the year ahead reached an eight-month high.

Businesses cut a small number of jobs, in contrast to the rapid hiring through much of 2021 and 2022. – Reuters