Fed chief: Pandemic aid not primary driver of US inflation 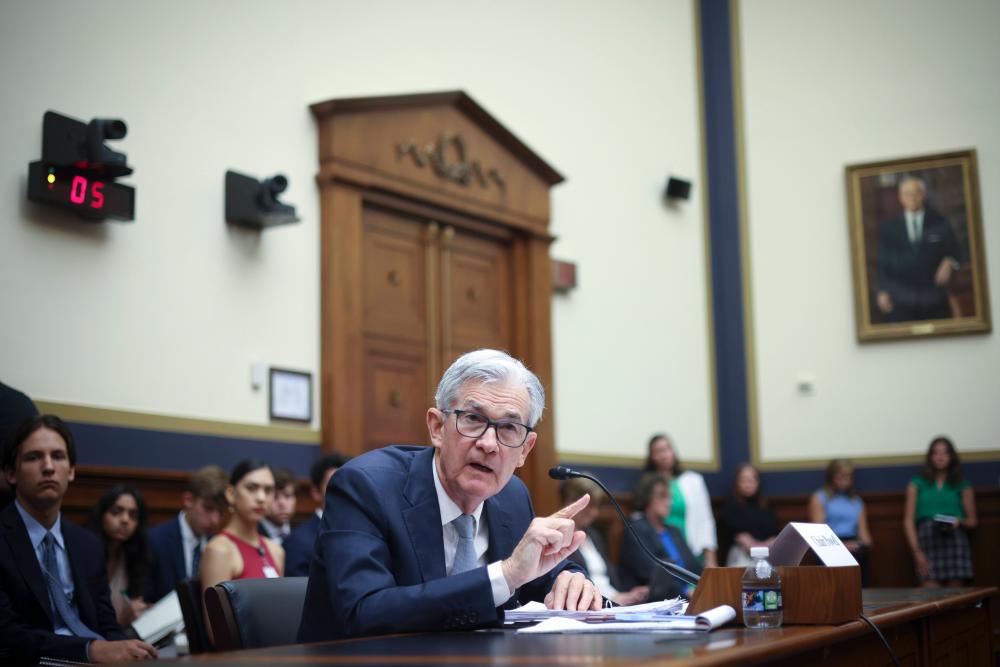 Powell testifying on monetary policy and the state of the US economy before the House Committee on Financial Services in Washington yesterday. AFPpix

WASHINGTON: Federal Reserve (Fed) chair Jerome Powell yesterday downplayed the idea that government pandemic aid was the key factor fueling US inflation, instead blaming a confluence of global issues including the war in Ukraine.

While stimulus spending was a factor, “a great deal of the price increases that you saw were a matter of supply being unable to meet demand” and “when demand hits fixed supply, what happens is prices go up”, he told lawmakers.

US inflation has surged to a 40-year high, picking up speed in recent months as the fallout from Russia’s invasion of Ukraine has sent fuel and food prices soaring, with petrol at more than US$5 (RM22) a gallon for the first time – putting strain on American families.

But Powell, who was testifying yesterday before a House committee, and others have noted that inflation is a global issue.

“Isn’t it just a massive storm of everything, is what contributes to inflation and causes it all over the world?” Meeks asked.

“Pretty much. That’s a pretty good description,” Powell said in the second day of his semi-annual testimony to Congress.

And, some of those factors are “out of our control – for example, the price of oil and most of the price of food”.

The Fed for months said price pressures were expected to be transitory, but Powell admitted that in hindsight, the Fed underestimated rising inflation.

The US central bank last week announced the sharpest interest rate increase in nearly 30 years and promised additional similar moves as part of its aggressive push to douse the inflation fires.

The moves have raised concerns the Fed could trigger a recession in the world’s largest economy.

Powell said the commitment to bringing inflation back down to 2% from 8.6% in May is “unconditional” but he cautioned that the Fed does not have “precision tools” and acknowledged there is a risk of a downturn.

Avoiding that “has become significantly more challenging with the events of the past few months, particularly the war”, he said.

But even if unemployment moves above the current historic low of 3.6%, even a jobless rate of 4.3% “is still a very strong labour market”, he noted.

And the United States, unlike some other countries, has “a very strong economy” and Fed policymakers “have tools to deal with demand”, Powell said. – AFP