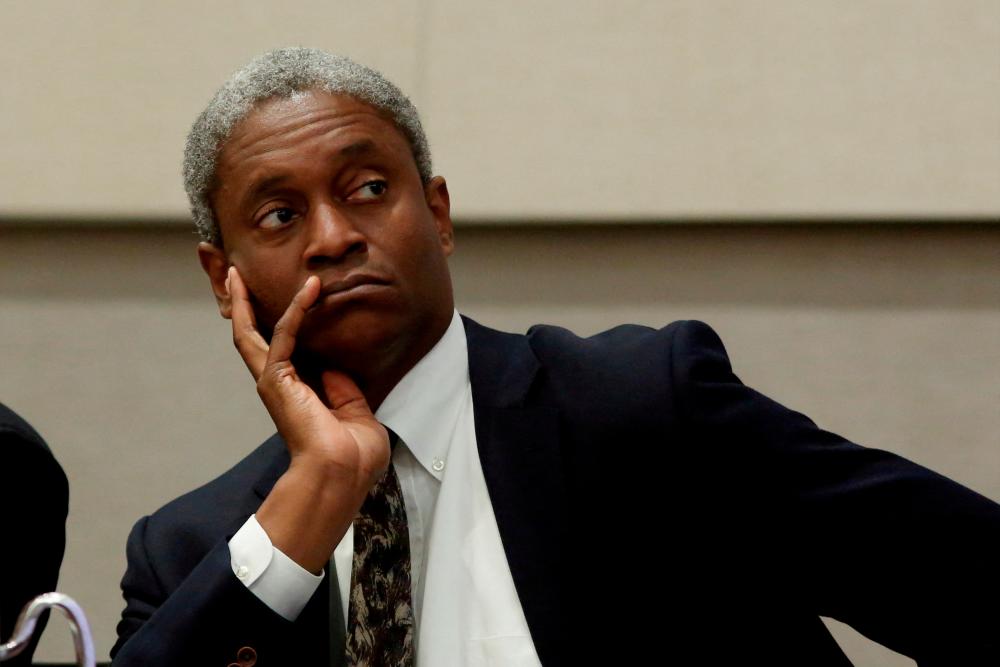 “There are interactions there,” Cleveland Fed president Loretta Mester said, noting that financial market volatility can affect investor decisions and the value of the dollar does impact the US economy.

“But in terms of our goals, we are going to set our policy, taking into account the environment we are in, in order to get back to price stability here in the US,” Mester said after a hawkish speech at the Massachusetts Institute of Technology in which she argued that it could be more costly to do too little to rein in inflation than to do too much.

Asked at a Washington Post event whether he felt US investors had taken an overly optimistic view of Fed policy until a recent sharp sell-off begin, Atlanta Fed president Raphael Bostic (pix) said that was beside the point.

“I don’t know whether they’re too optimistic or not optimistic enough ... the more important thing is that we need to get inflation under control,” Bostic said. “Until that happens we’re going to see I think a lot of volatility in the marketplace in all directions.”

Tax cuts proposed by the government of new British Prime Minister Liz Truss, with their potential to further stoke inflation, raised the prospect that the country’s fiscal policy will conflict with efforts by the Bank of England to tame price increases with higher interest rates.

The mixed signals have sent the pound into a tailspin, adding another dose of volatility to world financial markets already coping with Federal Reserve interest rate increases moving faster and higher than anticipated, with many other countries racing to follow suit.

“The reaction to the proposed plan is a real concern,” showing increased uncertainty about the UK’s economic prospects, Bostic said. “The key question will be what does this mean for ultimately weakening the European economy, which is an important consideration for how the US economy is going to perform.”

The US central bank last week approved a third consecutive 75-basis point rate hike, lifting its policy rate a total of three percentage points this year in what has been one of its fastest efforts ever to raise borrowing costs and slow the economy.

In recent weeks, Fed officials have been adamant that they will push rates as far as needed to cool inflation – even at the cost of rising unemployment and a possible recession.

Some sectors of the economy have felt the hit already, with mortgages on home loans doubling to more than 6%, and home sales dropping.

Mester at MIT was asked repeatedly about the housing market, and even whether the Fed had perhaps already gone far enough, but she stuck to her guns.

This is “going to be painful”, she said, and unemployment will rise, but to bring down inflation, “we are just going to have to move rates up and rates are going to be held higher for longer than we thought previously”.

She said she would want to see several months of month-to-month inflation declines before being convinced that inflation had peaked.

In separate remarks to the Greater Boston Chamber of Commerce, Boston Fed president Susan Collins echoed the Fed’s consensus that the fight to cool the current bout of inflation was paramount.

“At the moment, inflation remains too high,” Collins said in her first policy remarks since becoming head of the bank.

While she said she felt the pace of price increases may indeed be at or near its peak, “returning inflation to target will require further tightening” of credit conditions, which the Fed influences through increases to its target federal funds rate.

The Fed maintains a 2% inflation target, as measured by the personal consumptions expenditures price index. As of July that index was increasing at a more than 6% annual rate. Data for August will be released on Friday.

In recent weeks equity markets have reflected a broader repricing against the possibility of US interest rates returning to levels not seen in a decade and remaining there.

The S&P 500 is down 12% just in the month that Fed chair Jerome Powell delivered a stern message at a central bank symposium in Wyoming about the economic “pain” required to curb the fastest price increases since the 1980s.

Fed officials have often been accused of coddling financial markets, but have given little indication the current sell-off will cause them to reconsider their policy plans as long as prices and wages continue soaring, and the job market remains strong.

“The US economy functions best when there’s confidence about ... its trajectory over the short and medium term,” Bostic said. “High inflation undermines that.” – Reuters