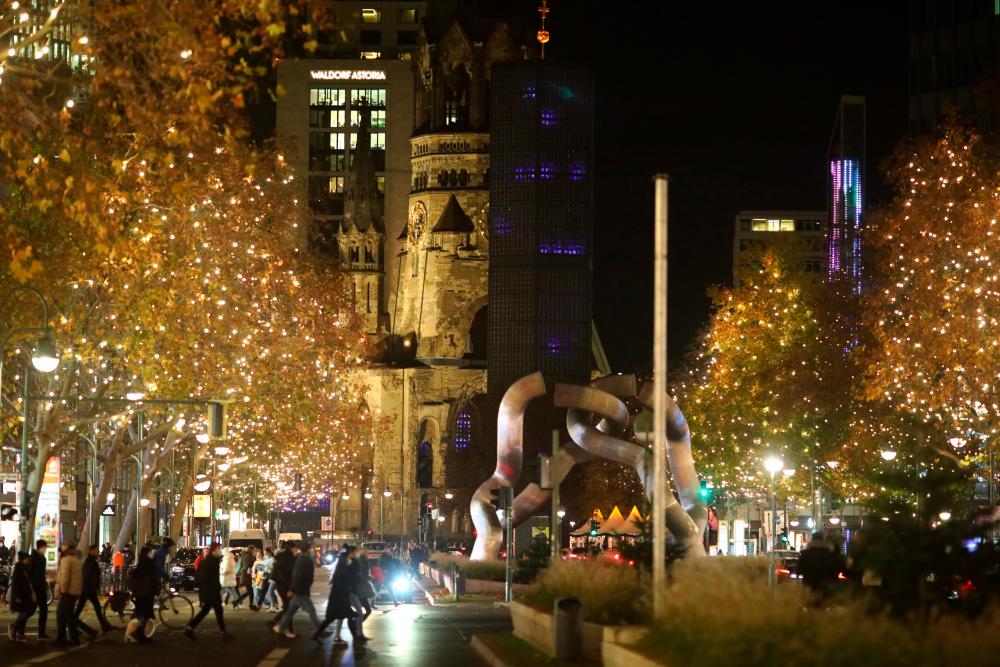 A view of Tauenzien Street in Berlin, Germany. The government expects the German economy to shrink 5.5% in 2020 before rebounding by 4.4% in 2021. – REUTERSPIX

FRANKFURT AM MAIN: Germany's economy grew by a better-than-expected 8.5% in the third quarter, revised data showed today, powered by household spending as the country emerged from tough coronavirus lockdowns earlier this year.

Private consumption jumped, Destatis said, partly thanks to a temporary reduction in value-added tax (VAT) to the end of the year, alongside a €300 (RM1,455) bonus per child for families as part of the government's stimulus package.

A sharp rise in exports and investment in machinery and other equipment also fuelled the recovery over the summer months.

The growth could "offset a large part of the massive decline in GDP recorded in the second quarter" due to the pandemic, Destatis said.

Between April and June, when Europe's top economy was hit by shutdowns of businesses and factories, GDP plunged by a record 9.8%.

But the lifting of restrictions allowed for a strong rebound as consumers returned to shops and manufacturing restarted.

"Once again, it's a positive surprise" said Jens-Oliver Niklasch, analyst for LBBW bank, adding that it was "clearly consumption-driven recovery".

However, "the risk of another setback in the final quarter of 2020 due to the ongoing lockdown is quite high", he said.

Germany is currently in the midst of new measures o curb the spread of a second wave of the virus, with the government predicting just 0.4% growth in the final quarter.

Chancellor Angela Merkel will meet with regional leaders tomorrow to decide on expanding restrictions, with any extension making "a double-dip, a contraction of the economy, in the final quarter of the year inevitable", ING bank analyst Carsten Brzeski said.

The Ifo institute's monthly barometer slid to 90.7 points from 92.5 points in October, marking the second drop in a row after five months of increases.

The index dived to a record low in April when Germany ordered factories and shops shut during the first Covid-19 wave, before picking up the following month as business activity gradually resumed.

But a spike in infections has forced another round of shutdowns this month, hitting bars, restaurants, hotels, sports and cultural centres. Shops and other businesses have remained open.

"Further setbacks are to be expected in the next one to two months," said LBBW bank economist Uwe Burkert, predicting that morale probably won't improve much "until the vaccination campaign begins".

The Ifo survey, based on 9,000 respondents, showed the uneven nature of how the pandemic is hitting German companies.

Sentiment in the services sector dropped considerably, particularly among hotels and hospitality, Ifo said. The mood is "markedly better" among manufacturers, who have been unaffected by the latest restrictions. – AFP