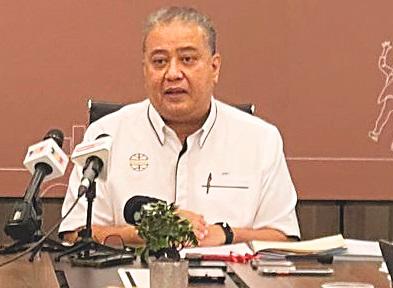 Group managing director and CEO Datuk Seri FD Iskandar (pic) said it has surpassed RM125 million in sales for the first two quarters of this year compared with RM160 million for whole of FY22.

“Last year we lost about eight months because of the emergency ordinance as well as the pandemic.

“Our projected new launches this year are about RM469 million, and most of them will happen in the third and fourth quarters. What I'm saying is we will do better than last year,” he told a media briefing after its AGM today.

However, the group is still “cautiously optimistic” on its prospects in the coming years due to the anticipated economic challenges.

“Every body is saying that there's a global slowdown coming soon. Some countries in Europe are already in recession. Domestically, we are facing interest rate hikes. We are also facing labour shortages,” he said.

FD Iskandar said property developers are facing oversupply in certain areas unless it has good products at a reasonable price, and in preferred locations.

“But in good locality there is still not enough supply. (If most properties are priced) below RM500,000 or RM600,000, unsold properties would be lower.”

Glomac is appealing to the government to reintroduce the Home Ownership Campaign (HOC) as well as increase the stamp duty exemption to 100%, from 75% as proposed in Budget 2023.

“We just finished a pandemic. And we are going through an endemic now, we have not recovered yet. So we still need certain boosts from the government. If you talk to most developers, number one on their wishlist is to reintroduce the HOC,” he stressed.

Despite a decrease in prices for construction materials made in the country, FD Iskandar said, there has yet to be a price decrease for imported items. “For example, the price of aluminum in the international market has dropped, but for us in Malaysia there has not been a drop in these imported items,” he said.

However, Glomac has not been able to increase the prices of its properties so as not to deter potential purchasers despite the higher costs. Instead, its profit margin has decreased.

At the AGM, Glomac shareholders approved a higher final single-tier dividend of 1.5 sen per share for FY22, compared to 1.0 sen previously.

Glomac has unbilled sales of RM542 million as at end FY22, which offers earnings visibility.

For FY22, Glomac’s net profit rose 35.8% to RM37.9 million from RM27.9 million last year due to revenue increase to RM259.5 million from RM366.9 million in FY21. Its performance was impacted by the pandemic lockdown and the emergency ordinance. Sales conversion picked up in the fourth quarter as economic restriction eased.