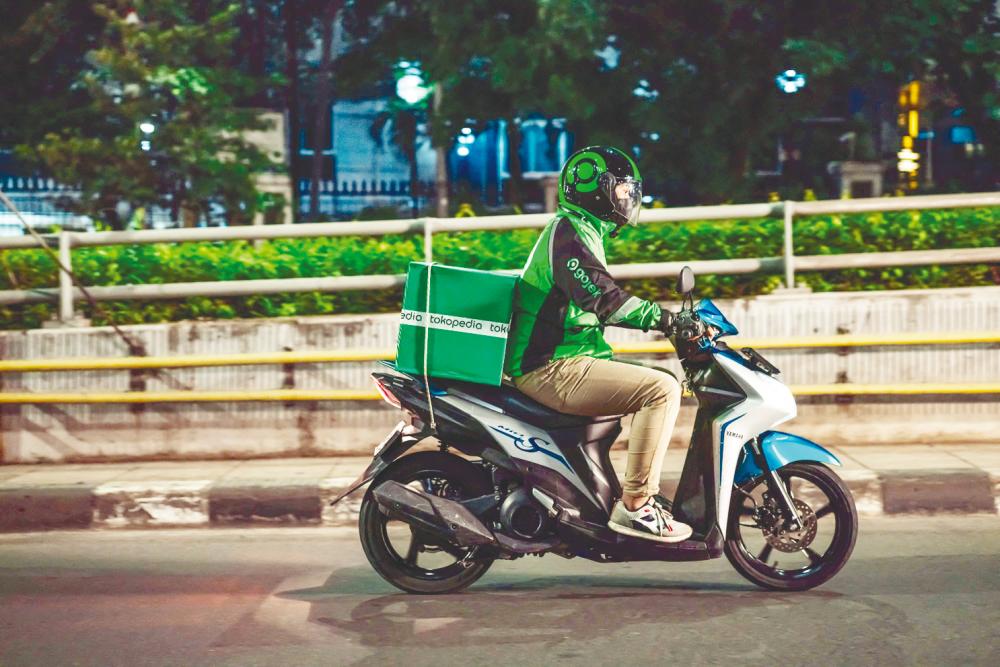 A Gojek rider delivering a Tokopedia package to a customer in Jakarta. – AFPPIX/GoTo Group

SINGAPORE: Indonesian ride-hailing and payments firm Gojek and e-commerce leader Tokopedia are merging to create a multi-billion-dollar tech company called GoTo in the country's largest-ever deal, as rivals bulk up in the fast-expanding sector.

The combined entity, which will span online shopping, courier services, ride-hailing, food delivery and other services in Southeast Asia's largest economy, will be the biggest privately held technology firm in the region. It plans to list in Indonesia and the United States later this year, company executives said on Monday.

Two sources familiar with the matter told Reuters that GoTo was seeking a pre-IPO funding that could enable it to raise about US$2 billion (RM8.26 billion) followed by public market floats with a potential valuation of roughly US$40 billion for the group.

In a joint statement, the companies said their combined past valuation was US$18 billion based on fundraisings done in 2019 and early 2020, and declined comment on future valuations.

The merger of Gojek and Tokopedia – each backed by global heavyweight investors – comes amid a surge of competition in the ride-hailing and food delivery markets in Southeast Asia. Stay-at-home pandemic restrictions have stoked demand for food delivery, e-commerce and e-payments.

“GoTo will still need to face stiff competition from larger regional rivals Shopee and Grab, which are leading in market share in both e-commerce and food and which have their dominance in other parts of Southeast Asia to cushion the long term investment commitment into Indonesia,“ said Jianggan Li, CEO of venture outfit Momentum Works.

Sources said Gojek's shareholders will own 58% of the holding company with the balance held by Tokopedia's investors.

“GoTo will be unique in its ability to cover two-thirds of Indonesian consumer expenditure”, Tokopedia President Patrick Cao told reporters. “If you look at our regional peers, they exceed only at covering one sector.”

Cao will become GoTo’s president and Gojek CEO Andre Soelistyo will be CEO of the group that says it has more than 100 million monthly active users and a registered driver fleet of more than 2 million.

GoTo's deal came together quickly in December after months of negotiations between Gojek and Grab fell apart. Gojek and Tokopedia's senior executives have personal and family ties and held discussions about a deal in 2018, sources said.

Using the model of Alphabet, Gojek and Tokopedia plan to remain separate but work together on payments, logistics and food deliveries.

While e-commerce is booming in Indonesia, with its digital economy expected to grow to US$124 billion by 2025, according to a 2020 study by Google, Temasek Holdings and Bain & Company, its 17,000 islands are spread across an area bigger than the European Union, making it extremely costly.

GoTo is also betting on its financial arm, which will own 22% of Indonesian digital lender Bank Jago.

Of Indonesia's population of 270 million, half lack bank accounts but most now have mobile phones.

Investors told Reuters the merger will herald a wave of Indonesian listings, with e-commerce company Bukalapak and travel app Traveloka expected to list this year.

“This is the beginning of us proving how local startups can grow at scale and from Indonesia to the world”, said East Ventures founder Willson Cuaca, an early backer of Tokopedia and Gojek shareholder.