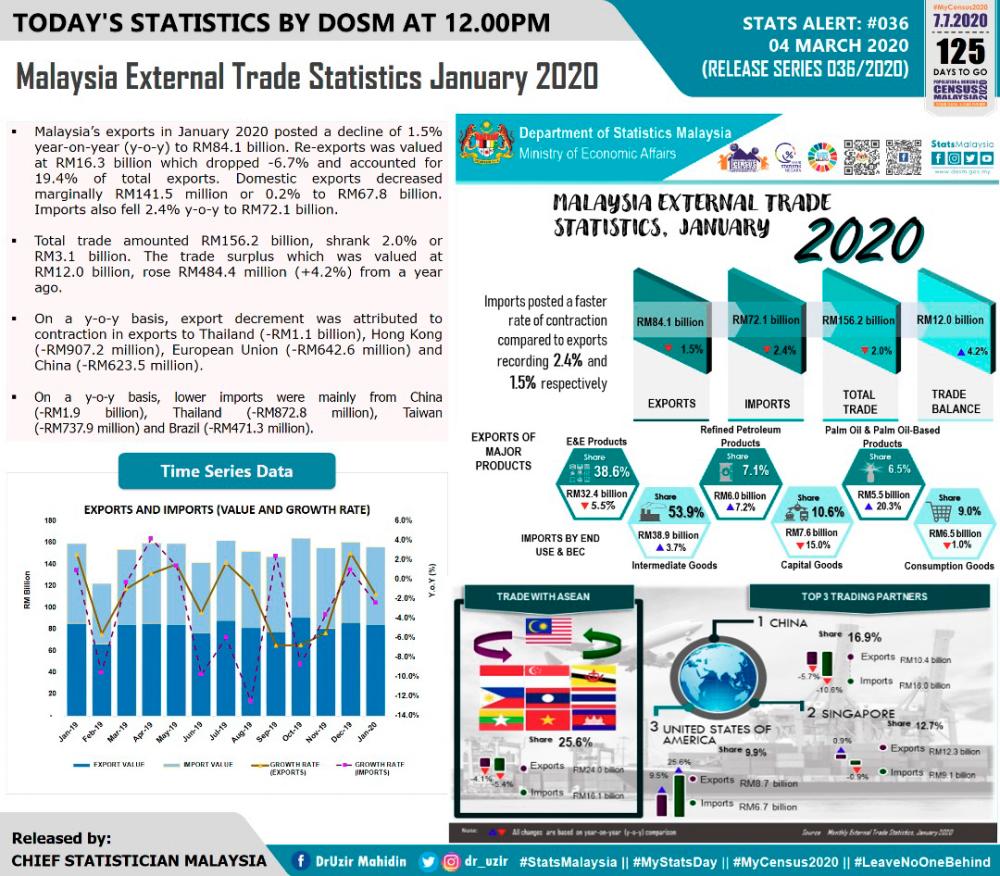 “This was the highest monthly trade surplus for January since January 2011, and the 267th consecutive month of surplus,“ the International Trade and Industry Ministry (MITI) said in a statement today.

On a month-on-month basis, the ministry said, total trade, exports, imports and trade surplus decreased by 2.6 per cent, 2.7 per cent, 2.4 per cent and four per cent, respectively.

According to MITI, manufactured exports grew 1.1 per cent to RM71 billion in January 2020, and accounted for 84.4 per cent of the total exports.

“The main contributors to the increase in exports were petroleum products, which increased by 45.8 per cent, iron and steel products (up 43 per cent), rubber products (up 10.7 per cent), followed by machinery, equipment and parts (up 5.7 per cent),“ it said.

Exports of mining goods posted a decline of 20.1 per cent to RM7.15 billion and constituted 8.5 per cent of the total exports.

“Lower exports were attributed mainly by the contraction in exports of liquefied natural gas (LNG), which was led by lower average unit value (AUV) and volume,“ it said.

On exports of agriculture goods, it said the value shrank 4.2 per cent to RM5.39 billion and accounted for 6.4 per cent of total exports, mainly due to the decline in exports of sawn timber and mouldings.

However, MITI said exports of palm oil and palm oil-based agriculture products recorded a marginal increase of 0.5 per cent to RM3.74 billion (from RM3.72 billion in January 2019).

Other major exports in January 2020 were electrical and electronics (E&E) products valued at RM32.41 billion and constituting 38.6 per cent of total exports.

It said among other major markets in ASEAN, exports to Indonesia expanded 10.8 per cent to RM2.69 billion due to higher exports of petroleum products while exports to the Philippines went up 7.8 per cent to RM1.48 billion on higher iron and steel products exports.

MITI said exports of manufactured goods to China advanced 5.4 per cent in January 2020, particularly for iron and steel products, manufactures of metal as well as optical and scientific equipment.

“Exports of agriculture goods were also higher by one per cent, buoyed by the increase in exports of seafood, natural rubber, vegetable oil and saw log,“ it said.

On trade with the US, MITI said total trade improved 16 per cent y-o-y to RM15.41 billion and accounted for 9.9 per cent of Malaysia’s total trade.

“This was the 11th consecutive month Malaysia’s trade with the US recorded an expansion, with exports to the US increasing 9.5 per cent to RM8.71 billion underpinned mainly by higher exports of manufactured goods which perked 10.9 per cent,“ it said.

The ministry said imports from the US expanded 25.6 per cent to RM6.7 billion, led by higher imports of crude petroleum, transport equipment, manufactures of metal, chemicals and chemical products, as well as metalliferous ores and metal scrap. -Bernama