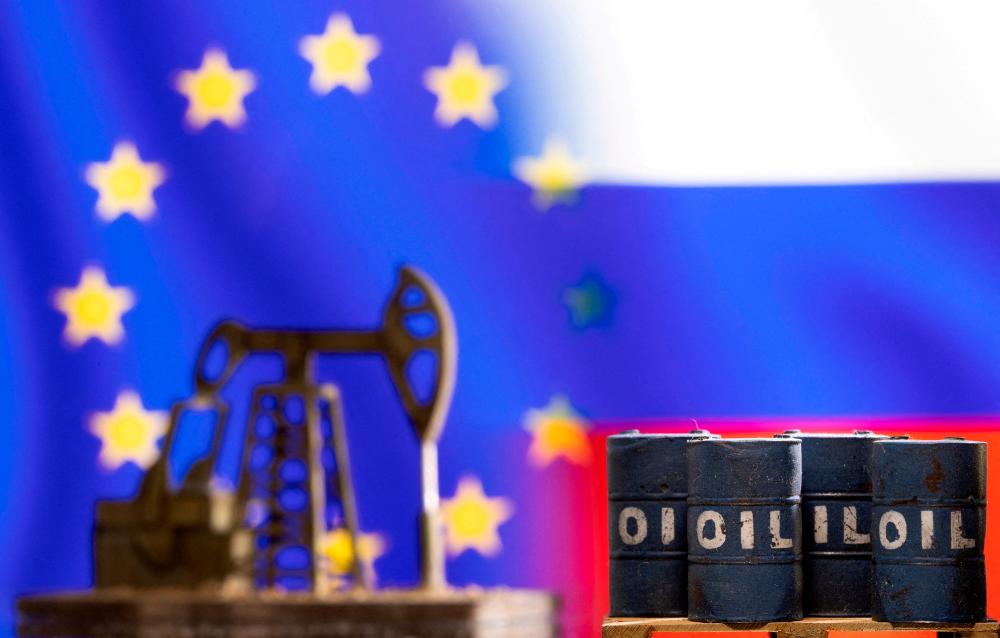 Models of oil barrels and a pump jack are seen in front of displayed EU and Russia flag colours in this illustration. – Reuterspic

Both benchmarks remain on target for their first weekly gains after three consecutive weeks of decline. On Monday, Brent touched US$80.61, lowest since Jan 4.

“We came into the session bullish but we’re not going to get to US$100 no matter what city reopens,” said Eli Tesfaye, senior market strategist at RJO Futures.

Tesfaye said he expects oil to trade in the US$70-US$90 a barrel range and gradually stabilize after higher volatility in recent weeks.

The shift in China’s zero-Covid strategy raised optimism about a recovery in oil demand there. The cities of Guangzhou and Chongqing announced an easing of Covid curbs on Wednesday.

“Oil markets are going to continue to be buffeted by ongoing news out of China, given how much of an impact ongoing lockdowns are having on oil demand in the world’s second-largest consumer,” said Matt Smith, lead oil analyst at Kpler.

Oil was supported through most of Thursday’s session by a slump in the dollar index to its lowest since August after the US Federal Reserve chair Jerome Powell said rate increases could slow this month. A weaker dollar makes oil cheaper for other currency holders.

The prospect of a lower price cap on Russian oil is also lending support, analysts said. European Union governments tentatively agreed on Thursday on a US$60 cap on Russian sea-borne oil, an EU diplomat said.

“After dipping into the mid-US$70s at the start of the week, oil is now shifting focus to the Opec meeting on Sunday, Russian sanctions, and the absence of large SPR barrels hitting commercial inventories - all three of these are price supportive,” Smith said.

The Organization of the Petroleum Exporting Countries (Opec) and allies, a group known as Opec+, will meet virtually on Dec 4, although a policy change is seen unlikely. – Reuters