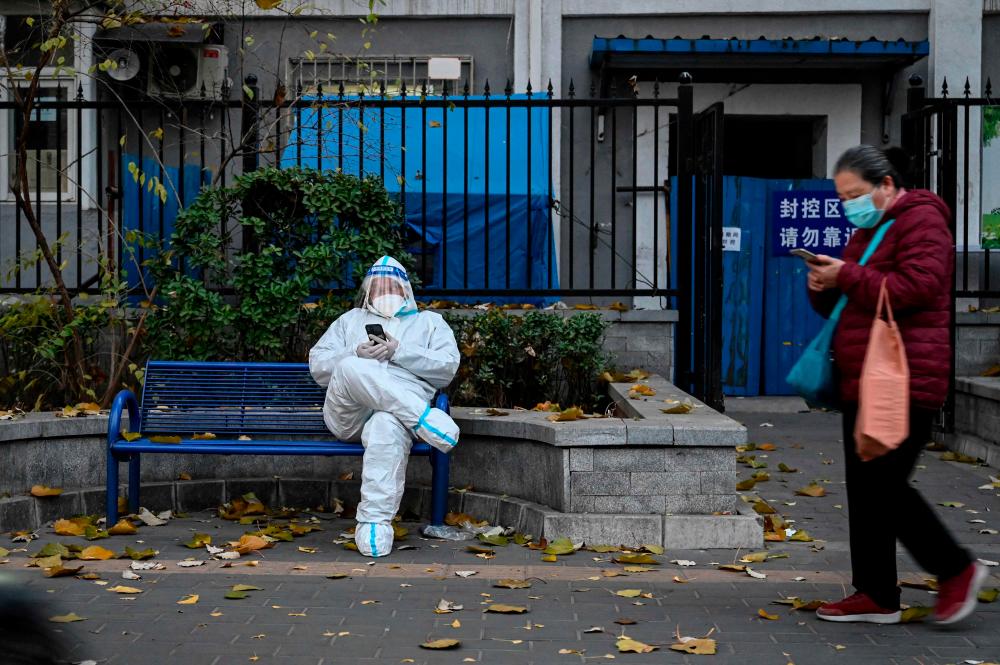 A man clad in personal protective equipment sits outside a residential building under lockdown due to Covid-19 restrictions in Beijing on Tuesday, Nov 22. Analysts now are cutting forecasts for China’s year-end oil demand. – AFPpic

NEW YORK: Oil prices rose about 1% on Tuesday (Nov 22) after top exporter Saudi Arabia said Opec+ was sticking with output cuts and could take further steps to balance the market.

However, prices pared gains late in the session after Bloomberg reported that the European Union watered down its latest sanctions proposal for a price cap on Russia’s oil exports by delaying its full implementation and softening key shipping provisions.

The bloc proposed adding a 45-day transition to the introduction of the cap, according to Bloomberg.

On Dec 5, a European Union ban on Russian crude imports is set to start, as is a G7 plan that will allow shipping services providers to help to export Russian oil, but only at enforced low prices.

“The price cap is turning out to be an enabling device for western countries to keep Russian crude on the market,” said John Kilduff, partner at Again Capital LLC here. “The big crux of this market has been whether or not we will lose meaningful amounts of crude and refined products from Russia and that still has not happened.”

The United Arab Emirates, another big Opec producer, denied it was holding talks on changing the latest Opec+ agreement, while Kuwait said there were no such talks. Algeria said an “improbable” revision of the Opec+ agreement was not discussed.

Opec, Russia and other allies, known as Opec+, meet on Dec 4.

Beijing shut parks, shopping malls and museums on Tuesday and more Chinese cities resumed mass Covid testing. The Chinese capital on Monday warned that it is facing its most severe challenge of the pandemic and tightened rules for entering the city.

In focus later will be the latest weekly snapshots of supply in the United States, which are expected to show crude inventories fell by 2.2 million barrels. – Reuters 5.Covid confusion in China as authorities row back curbs