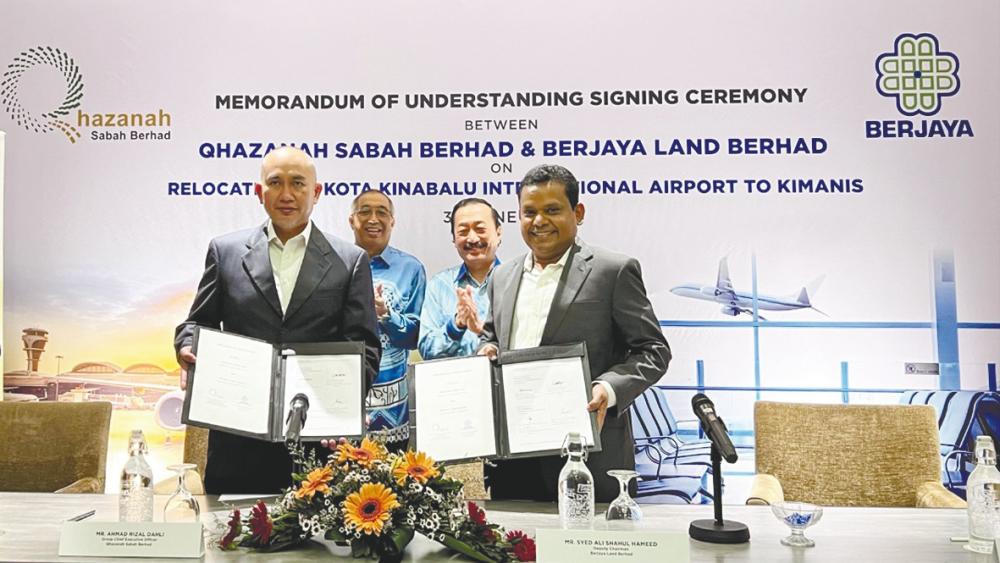 From left: Ahmad Rizal, Salleh, Tan and Syed Ali at the signing of the MoU today.

“The MoU establishes preliminary collaboration between both companies, paving the way for QSB to carry out feasibility studies and exploratory works for the proposed project.

Everything is preliminary at the moment until consensus with all relevant stakeholders is reached,” said QSB Group CEO Ahmad Rizal Dahli.

He added that as the Sabah government’s investment arm, QSB has been tasked with looking into various strategic development initiatives to support the economic growth of Sabah, including the possible relocation of KKIA to Kimanis. He stressed that feedback from all stakeholders will be taken into consideration and consensus has to be unanimous before any decision is made on the proposed relocation.

Ahmad Rizal said the relocation of KKIA has been suggested in various discussions for a decade. “This MoU allows us to look at this in more detail, particularly in terms of economic viability and social impact assessment.

“We are looking forward to tapping the expertise brought on board by the early partnership with BLand, particularly on infrastructure development. Any outcome as a result of the feasibility studies would be made in the best interest of the state. This has always been and will continue to be our focus in whatever we do,” he said.

According to Ahmad Rizal, KKIA is unlikely to be able to expand further in operational terms, including expansion of its terminal building and runway as well as other facilities, due to limited land area and its current location, which is surrounded by privately owned land and its proximity to Kota Kinabalu city centre.