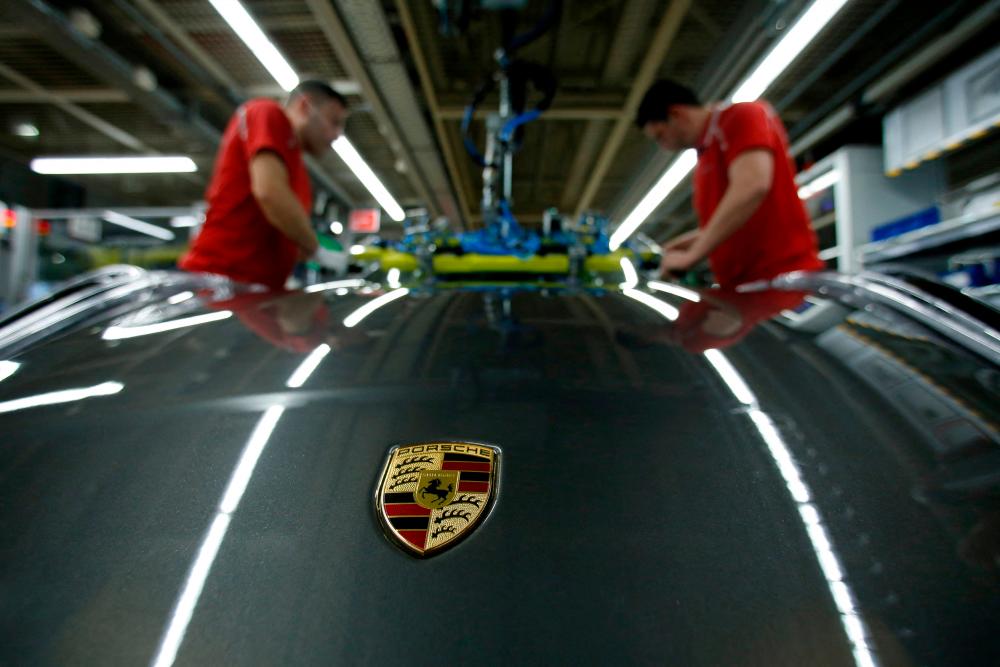 Workers installing the windshield of a Porsche 911 at the carmaker’s factory in Stuttgart-Zuffenhausen, Germany. – Reuterspix

HAMBURG/FRANKFURT: Volkswagen (VW) on Monday (Sept 5) announced its intention to float sports car brand Porsche, triggering what could become one of the world’s largest listings even as markets jitter over record inflation and a Russia-Europe energy standoff.

The carmaker published a so-called “intention to float for an initial public offering (IPO)” in late September or early October to be completed by the end of the year.

The move to list shares in Frankfurt was announced after Volkswagen’s supervisory board gave the go-ahead late on Monday.

“The Board of Management of Volkswagen AG today resolved ... to pursue an initial public offering of the preferred shares of Porsche AG with the target to list them on the regulated market of the Frankfurt Stock Exchange ... at the end of September/beginning of October 2022,” a statement said.

“In the event of a successful IPO, Volkswagen AG will convene an extraordinary general meeting in December 2022 at which it will propose to its shareholders that a special dividend amounting to 49% of the total gross proceeds from the placement of the preferred shares and the sale of the ordinary shares be distributed,” it added.

The auto giant officially signalled its intention to go ahead with the IPO on Feb 24, the day that Russia began its invasion of Ukraine.

“This is a historic moment for Porsche,” new Volkswagen CEO Oliver Blume said, adding that Porsche could have “greater independence” and be one of “the richest sports car makers in the world”.

Investors expect a valuation between €60 billion and €85 billion (RM267.1 billion and RM378.5 billion). At the high end of estimates, the IPO could be the largest in German history and the biggest in Europe since 1999, Refinitiv data showed.

Volkswagen said an IPO would be a significant next step in the transformation of the company as it aims to become a leading provider of software-based mobility.

Qatar will be a cornerstone investor intending to commit to a 4.99% stake in the newly listed company, Volkswagen said.

The intention to float included an offering to retail investors in countries in Europe including France, Spain and Italy, an attempt to tap into Porsche’s loyal fan base.

Volkswagen approved a 25% plus one share of ordinary shares in Porsche AG to be sold to Porsche SE, as laid out in a framework agreement by the two parties in February.

This gives the Porsche and Piech families, who control Porsche SE, a blocking minority - bolstering their push for greater control under Blume.

Market investors would be given the opportunity to buy preferential shares in Porsche that have no voting rights but receive a boosted dividend.

The potential spin-off of the iconic carmaker, named for the Porsche family, from the larger group would help Volkswagen finance its own shift towards electric vehicles.

The Wolfsburg-based group is pumping tens of millions into the strategy, including building a clutch of battery factories across Europe and the US.

The potential gains from the IPO would give Volkswagen “greater flexibility to accelerate the transformation” of the group, chief operating officer Arno Antlitz said in an interview on Monday. 4.Spurring optimism after being struck by blindness