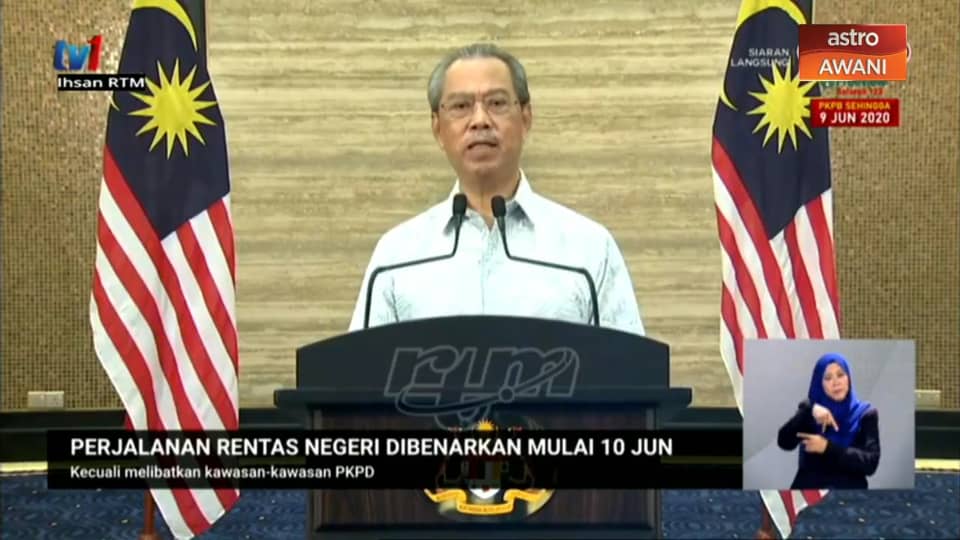 PETALING JAYA: The government will end the Conditional Movement Control Order (CMCO) on June 9, and will bring the country into the Recovery MCO (RMCO) phase from June 10 to Aug 31.

Prime Minister Tan Sri Muhyiddin Yassin (pix) said this meant the loosening of restrictions imposed during the MCO period and that certain social, educational and business activities are now allowed to operate.

“From June 10, interstate travel will now be allowed for those who have not been able to seen their parents for the past three months,“ he said in a live televised address today.

He also said during the RMCO, social, educational and religious activities will return to normal in stages, provided that people abide by the strict SOP that is being deliberated.

“Besides that, commercial activities that involves buying and selling not within the premise is also allowed. This includes visits to the museum, indoor busking, self-service laundrettes, recreational fishing including commercial fishing ponds, and film shooting,“ he said.

He also said meetings and workshops are also allowed provided that they abide by health protocols as well as optimisation of space.

A few sports and recreational acitivites will reopen with strict SOPs imposed, which includes sports that doesn’t involve touching, including bowling, badminton, archery, shooting, to name a few.

“Other activities like bicycle or motorcycle convoys are still allowed. ‘

However, what is not allowed are sports competitions or games that involves gathering of supporters or spectators like at stadiums, swimming or swimming pools, as well as sports that involves human contact like rugby, wrestling, boxing, football, basketball and hockey,“ he said.

“For those who want to do international travel, you will have to wait because our borders remain closed,“ he said.

He also said the Hari Raya Aidiladha and the korban activities will be allowed subject to the SOP released by the Islamic authorities. For the religious activities in houses of worship and mosques, more are allowed to join the congregation after the government fine tunes the SOP and will be announced soon.

“If our fellow Malaysians continue to be disciplined and abide by the rules, I believe the spread of the Covid-19 outbreak will remain in control and we will enter the normalisation phase after Aug 31 and until a vaccine is found,“ he said.

He also urged the people to download the MySejahtera app that was developed by the government so that they can evaluate their own health, and allow the Health Ministry to take action fast, accurate and effective about any Covid-19 infection case.

He added that the Education Ministry will make a further announcement with regard to the reopening of schools after more fine tuning of the SOPs.

However, pubs, nightclubs and other entertainment centres like karaoke are not allowed to open yet.