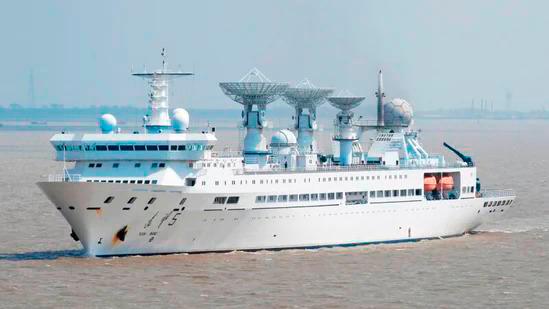 COLOMBO: Sri Lanka's government granted permission on Saturday for a controversial Chinese research vessel to visit the island despite neighbouring India's concerns that it could spy on New Delhi's military installations, officials said.

The Yuan Wang 5 is described as a research and survey vessel by international shipping and analytics sites, but according to Indian media it is a dual-use spy ship.

New Delhi is suspicious of Beijing's increasing presence in the Indian Ocean and influence in Sri Lanka, seeing both as being firmly within its sphere of influence.

The Yuan Wang 5 was originally due to call at Sri Lanka's Chinese-run Hambantota port on August 11, only for Colombo to ask Beijing to indefinitely defer the visit following India's objections.

But Sri Lanka's harbour master, Nirmal P Silva, said he had received foreign ministry clearance for the ship to call at Hambantota from August 16 to 22.

“The diplomatic clearance was received by me today. We will work with the local agent appointed by the vessel to ensure logistics at the port,“ Silva told AFP.

Foreign ministry sources confirmed that Colombo had renewed permission for the visit, which had initially been granted on July 12, a day before former president Gotabaya Rajapaksa fled following months of protests over the country's worst-ever economic crisis.

Rajapaksa -- whose brother Mahinda borrowed heavily from China while president from 2005 to 2015 -- resigned after escaping to Singapore.

Tens of thousands of protesters overran his palace and home in Colombo after accusing him of mismanagement in an economic crisis that has led to acute shortages of food, fuel and medicines.

Port officials said the Chinese vessel was about 1,000 kilometres (620 miles) south-east of Sri Lanka on Friday night and was heading slowly towards the Hambantota deep sea port.

Sri Lanka leased the port to China for 99 years for $1.12 billion, less than the $1.4 billion Sri Lanka paid a Chinese company to build it.

According to Indian reports, the Yuan Wang 5 could be employed for space and satellite tracking, and has specific uses in intercontinental ballistic missile launches.

The Indian government has expressed concern that the ship could spy on its activities, and had lodged a complaint with Colombo.

New Delhi’s foreign ministry has said it will closely monitor “any bearing on India’s security and economic interests and takes all necessary measures to safeguard them”.-AFP James Cameron’s Avatar to be re-released this month

5.James Cameron’s Avatar to be re-released this month