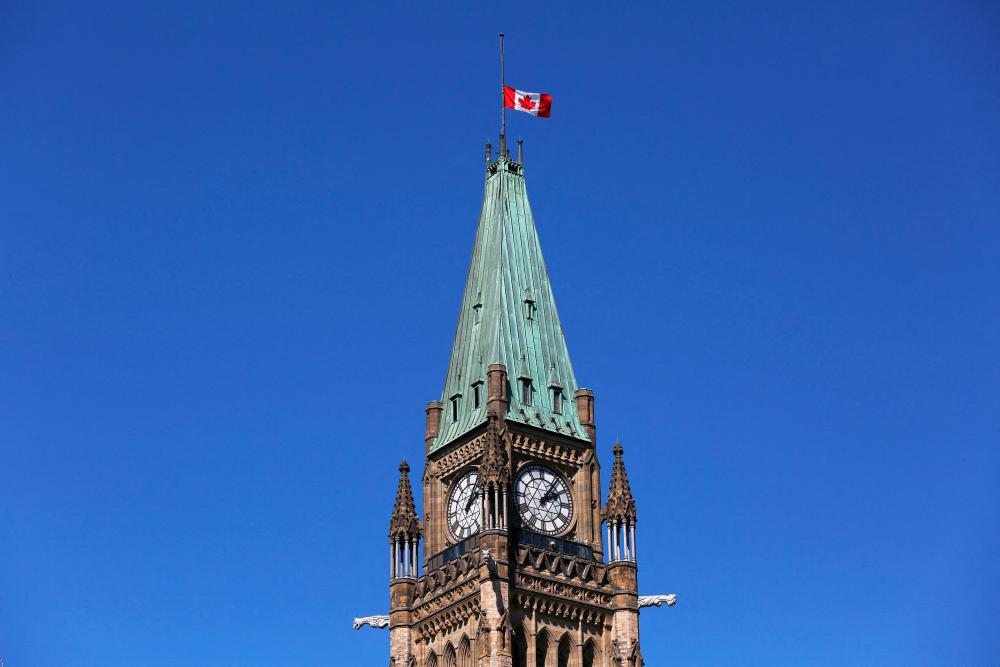 A Canadian flag flies at half-staff at the top of the Peace Tower after the death of Britian’s Queen Elizabeth II on September 8, 2022 in Ottawa/AFPPix

OTTAWA: Canadian Prime Minister Justin Trudeau paid a tearful tribute Thursday to Queen Elizabeth II, whom he first met as a child and admired personally, saying she will “forever remain an important part” of his country’s history.

“She was our queen for almost half of Canada’s existence. And she had an obvious, deep and abiding love and affection for Canadians,“ he told a news conference, speaking of the monarch who also served as Commonwealth member Canada’s head of state.

“She served us all with strength and wisdom for 70 years,“ he added, his eyes filling with tears as he disclosed: “I’m having trouble believing that my last sit down with her (as prime minister) was my last.”

“I will miss those chats,“ he added.

Trudeau first met the queen when he was a boy and his father, Pierre Trudeau, was prime minister in the 1970s.

“She was one of my favorite people in the world,“ he said. “And I will miss her so.... She was thoughtful, wise, curious, helpful, funny and so much more.”

“In a complicated world, her steady grace and resolve brought comfort and strength to us all. Canada is in mourning,“ he said.

Queen Elizabeth had visited Canada a total of 22 times, more than any other country.

During her last visit in June 2020, the monarch told the crowd gathered in Halifax on Canada’s Atlantic coast: “It’s very good to be home!”

Opposition leader Candice Bergen echoed Trudeau’s sentiments, noting that Elizabeth “was not only a witness to our historical evolution as a modern, confident, and self-assured nation -- she was an active participant.”

Bergen recalled the queen’s presence for a ceremony to open the St. Lawrence Seaway and later presiding over the opening of the Olympic Games in Montreal in 1976, as well as her endorsement of the repatriation of Canada’s Constitution from Britain.

Trudeau earlier said in a statement the queen “was a constant presence in our lives -- and her service to Canadians will forever remain an important part of our country’s history.”-AFP