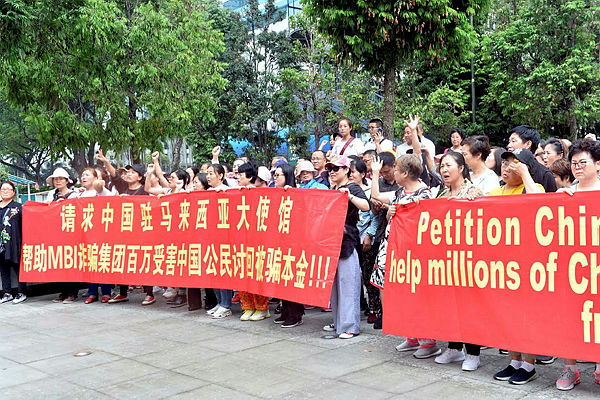 KUALA LUMPUR: Over 100 China nationals who claimed to have lost their savings to a local investment company staged a peaceful protest near the Embassy of the People’s Republic of China today.

The protesters urged the Chinese government to assist them in recovering hundreds of millions of ringgit they had invested in MBI International Holdings, a Penang-based company blacklisted by Bank Negara Malaysia.

The alleged victims, who arrived in Malaysia on Monday from various parts of China, claimed many of them had borrowed money from relatives and other sources to make the investments.

The group gathered early yesterday and their numbers swelled to over 100 by noon.

They chanted and sang songs, calling on the Chinese embassy to intervene.

They claimed the lives of hundreds of victims had been adversely affected, and some had committed suicide after failing to recover their money.

Police kept a close watch on the group before they dispersed later without incident.

MBI International had been in the news in recent years after being busted by Bank Negara and other enforcement agencies for promoting investment plans that were found to be pyramid schemes.

In May last year, its founder Tedy Teow Wooi Huat, 52, was charged for issuing electronic money without Bank Negara approval.

He and his company are also facing multiple probes by Bank Negara, the police and the Domestic Trade, Cooperatives and Consumerism Ministry. 1.Marsch aims to get the best out of Leeds at Southampton despite heat

2.Chelsea tailor-made for me, says Sterling