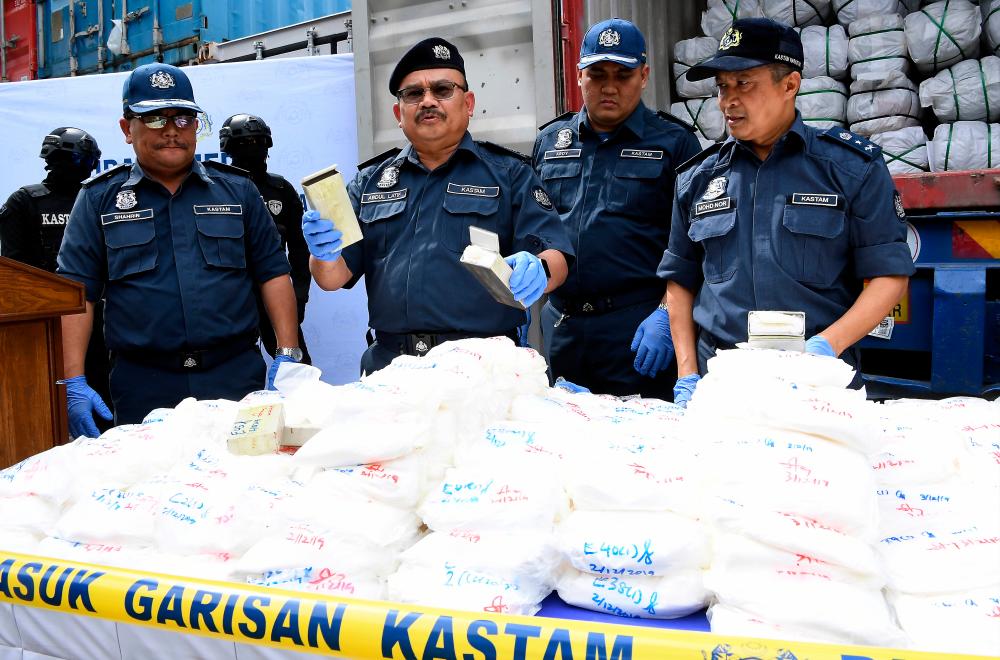 NILAI: The Customs Department believes that an international drug trafficking syndicate has been crippled with the arrest of four men, including a local resident, in two separate raids in Selangor, earlier this month.

Customs deputy director-general (enforcement and compliance) Datuk Abdul Latiff Abdul Kadir said the raids were carried out on Dec 2 and 3 in Batu Caves and Port Klang, respectively, and 82 kg of ketamine worth almost RM5 million was seized.

“In the Dec 2 raid, at 1pm, four men were detained in a warehouse in Batu Caves and 168 plastic boxes were found containing white powder suspected to be 42 kg of ketamine, hidden inside the door frames of three containers which were in the premises.

“Following the raid, we also seized three more containers at Port Klang the next day, which was in the process of being shipped to the warehouse and found 168 plastic boxes containing the same white powder suspected to be ketamine weighing 40kg,” he told reporters, here today.

He said all the containers were imported from the port of Karachi, Pakistan to Port Klang before being shipped to the warehouse premises in Batu Caves.

“The drug was concealed in the door frame of six containers, which contain bundles of clothing (used),” he said.

He said all those arrested were remanded until Dec 16, for further investigation under Section 39B of the Dangerous Drugs Act (ADB) 1952.

In the meantime, he said they were now hunting for two other Pakistani men, known as Muhammad Fasih Khan, 27, and Muhammad Muhammad Bilal Malik, 29, to assist in the investigation.

Any information regarding the duo can be directed to Customs investigating officer Muhamad Ardy Ismail at 017-6061505. - Bernama