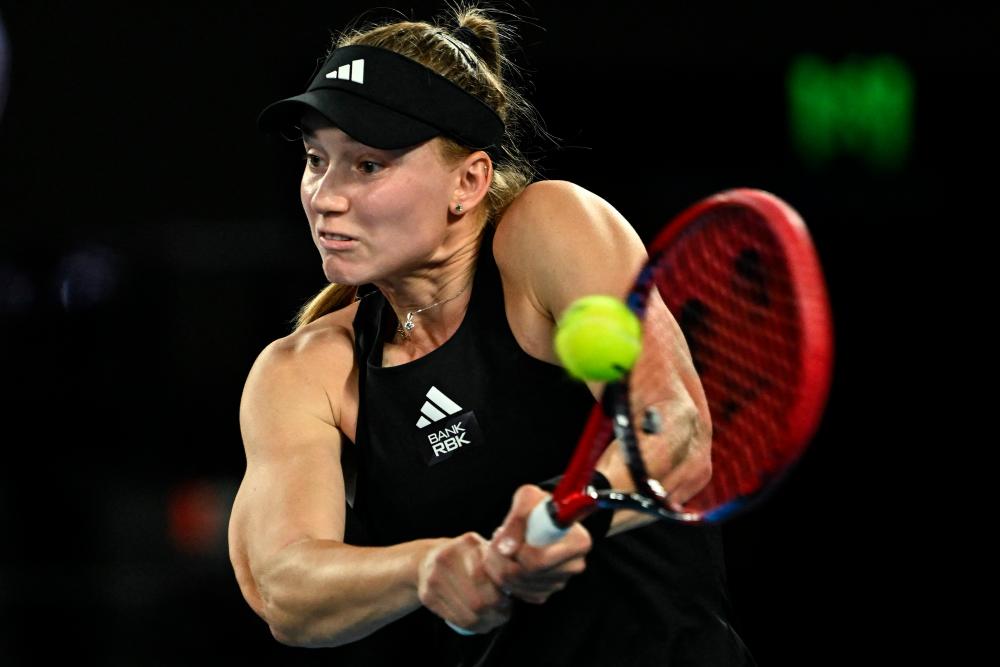 Kazakhstan’s Elena Rybakina hits a return against Latvia’s Jelena Ostapenko during their women’s singles quarter-final match on day nine of the Australian Open tennis tournament in Melbourne on January 24, 2023. AFPPIX

MELBOURNE: Wimbledon champion Elena Rybakina showed she is in the mood for a second Slam title by crushing Jelena Ostapenko 6-2, 6-4 at the Australian Open on Tuesday, sealing the quarter-final with a brilliant display of power serving.

The 22nd seed raced past the former French Open champion, seeded 17, in 1hr 19min on Rod Laver Arena and will face either American Jessica Pegula or Belarusian Victoria Azarenka for a place in the final.

“I am super happy to be in the semi-finals. It was an amazing atmosphere,“ said the Kazakh star.

“Of course, I was nervous, especially in the last game, to be honest. Not as nervous as before the match. I am super happy that I managed with my emotions and I played very well today,“ the 23-year-old added.

Rybakina had declared “she could beat anyone” after knocking out top seed Iga Swiatek in straight sets on Sunday.

And she was quickest out of the blocks behind her big serve, breaking Ostapenko immediately and hammering down three aces to reach 3-1.

She created another break point at 30-40 when a sudden cloudburst halted the 22nd seed's momentum.

The players scurried from Rod Laver Arena while the roof was closed and the water mopped up.

“In Australia you never know. In the morning, one weather, then in a few hours it changes, so you have to be ready always,“ Rybakina said of the interruption.

After a delay of almost half an hour, Ostapenko saw off the immediate danger but was powerless to prevent the aggressive Rybakina capturing the game on a second break two points later.

Rybakina's serving got her out of trouble in the next at 15-40 and she closed out the opening set -- played under two different sets of conditions -- in 32 minutes.

'Trying to be calm'

“Everybody needs to adapt,“ Rybakina said of the roof being closed, which can affect the flight of the balls.

“I think I did really well from the beginning of the match and continuing through the first set.”

Ostapenko upped the power on her groundstrokes at the start of the second, breaking for 2-0 with a scream.

But the calm Rybakina reeled off four games in a row to put the finish line firmly in sight.

At 6-5 serving for the match, the normally assured Russian-born Rybakina saw two match points saved before her 11th ace propelled her through.

Rybakina thanked her coaching team in her players box for helping her with the jitters as she tried to close out the match.

“I am trying to be calm, but I need them and it helps a lot during the match,“ she said

“There is a lot of energy from my box.

“Thank you to my coaches, to family and friends,“ added the world number 25, who would be inside the top 10 had she received points for her Wimbledon win, where Russian and Belarusian players were banned.

Ostapenko, also in her first Melbourne Park quarter-final, had won both the pair's previous encounters.

After knocking out seventh seed Coco Gauff in the fourth round, the 25-year-old said her confidence was back, but it will have taken a dent after running into Rybakina. - AFP