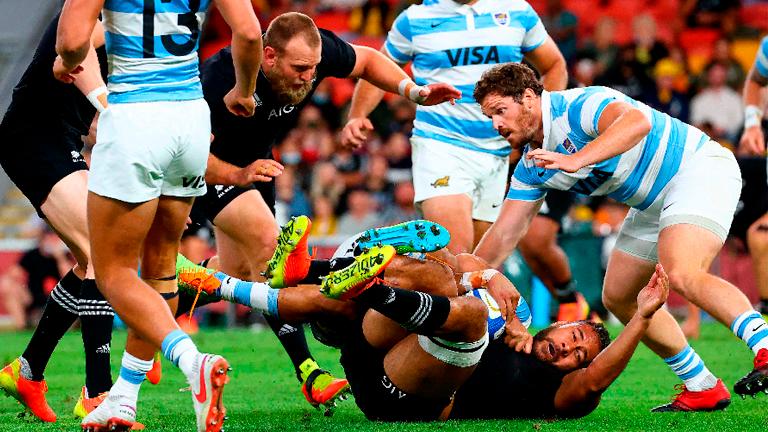 BRISBANE: An under-strength but still ominous New Zealand inflicted a fourth straight Rugby Championship defeat on Argentina Saturday, with the All Blacks cruising to a 36-13 victory in Brisbane.

Tupou Vaa’i bagged a brace with Patrick Tuipulotu, TJ Perenara, and Samisoni Taukei’aho also crossing in a game that could have been worse for Los Pumas, as New Zealand had three tries disallowed.

Facing an intense schedule, coach Ian Foster made wholesale changes for the round four clash, picking only three of the starting side that thrashed Argentina 39-0 last weekend.

But even a team missing a host of regulars proved too much – making it four wins from four to give them an almost unassailable lead in the southern hemisphere tournament.

“I’m just glad we got the win, we knew it was going to be tough today,” said skipper Ardie Savea, who was part of the completely revamped forward pack who took the field in front of 38,000 fans.

“We got a really tight group and we just have trust in anyone who puts on the jersey. We expect them to go out there and perform, so I’m proud of the boys.”

They took just four minutes to get their opening try and raced to the break with a 24-3 lead.

There was no way back for Los Pumas, despite a battling second half performance with Mario Ledesma’s men at least taking consolation in scoring points after failing to get any in their previous two Tests against New Zealand.

He admitted last week that his team's long stint on the road was taking its toll, with star number 10 Nicolas Sanchez among a host of players injured and not considered for the game.

“We were more competitive than the last game but they still scored five tries,” said Pumas captain Julian Montoya.

“We were scrambling to be better, but I thought we played well and I’m proud of the effort of the team right until the end.”

The All Blacks signalled their intent early with Hoskins Sotutu able to pick and go then find Will Jordan who careered towards the try line.

He was tackled just short but the ball was recycled to lock Tuipulotu who used brute strength to crash over with Jordie Barrett adding the extras.

A rare infringement from the restart gifted Argentina their first three points of the night, but New Zealand kept coming.

They upped the tempo and first Jordan then Rieko Ioane both had tries disallowed for passes that went forward, denying them a reward for some slick play.

But the New Zealand pack was dominant and they finally found the try line again when Sotuto fed Perenara from a scrum and he darted over.

Ioane had another try disallowed for an infringement but their relentless pressure paid off when Vaa'i crossed in the corner just before the break.

Emiliano Boffelli doubled Argentina’s points total early in the second stanza with another penalty, but it was only a matter of time before the All Blacks struck again.

This time it came courtesy of Samisoni Taukei’aho out wide, who dotted down after some quality ball movement from the backs.

Despite being under huge pressure, Argentina persevered and against the run of play bagged a try with Boffelli collecting a beautiful cross-field kick from Santiago Carreras.

It fired them up and they began stringing phases together, but New Zealand’s defence held firm and they rubbed salt in Argentina's wounds when Vaa’i scored his second just before the hooter. – AFP