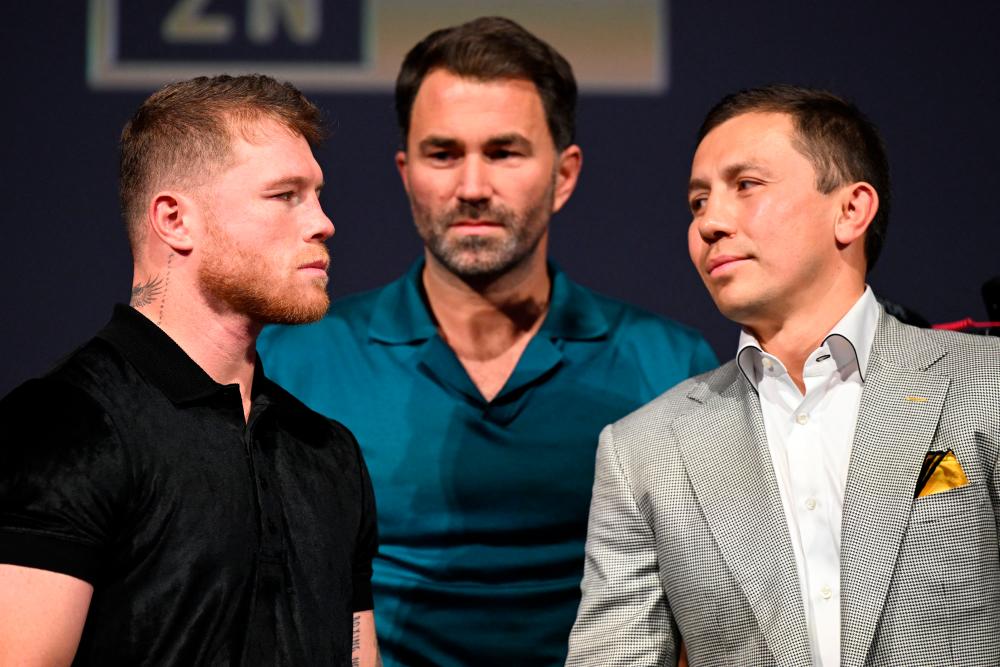 Mexican boxer Saul “Canelo” Alvarez (L) and Kazakhstani boxer Gennady Golovkin (R), alongside boxing promotor Eddie Hearn (C), pose for photos during a press conference ahead of their fight for the undisputed super middleweight championship of the world, in Hollywood, California on June 24, 2022. AFPPIX

Five years after their first bout ended in a controversial draw, Mexican icon Alvarez and the heavy-hitting Golovkin face a trilogy bout in Las Vegas on September 17 to settle their rivalry once and for all.

The long-awaited contest at the T-Mobile Arena will draw a line under a rivalry that has become increasingly acrimonious over the years.

Hints of that tension flared on Friday as the two men came face-to-face, going nose-to-nose for nearly two solid minutes before a press conference got under way.

“And I will do it for sure,“ Alvarez said. “That’s the only way I want to finish this fight.”

Alvarez added that beating Golovkin had become personal, accusing the Kazakh of trash-talking against him in certain situations.

“It’s personal for me,“ Alvarez said. “This is the way I am. I’m not pretending to be another person or saying things in the media and then come here and pretend I didn’t say anything.

“He’s two different people. He pretends to be a nice guy, but he’s not, he’s an asshole.

“He pretends to be a nice guy and then other times he talks a lot of shit. Just be a man and say what you say.”

The reigning WBA and IBF middleweight champion, who was beaten by Alvarez in their second meeting in September 2018 in another hugely controversial decision, insisted their third meeting was purely business.

“I don’t think this is personal,“ Golovkin said. “This is sport. I am who I am. I don’t try to be different guys. I go out to box.

“If he has something personal against me that’s his problem not mine.”

Alvarez meanwhile will be fighting for the first time since being outclassed by Dmitry Bivol last month in what turned out to be an ill-fated jump up to the light-heavyweight division.

Alvarez said he wanted to get back in the ring quickly despite the comprehensive nature of his defeat to Bivol.

“It was very important, a lot of people take one or two years to get back after a loss,“ he said. “But I am in boxing because I want to be one of the best fighters in history.”

Golovkin's trainer Johnathon Banks meanwhile brushed off suggestions that Alvarez would somehow be a less dangerous opponent after the Bivol loss.

“He’s gonna bring the hardest fight to whoever he’s in the ring with. Canelo Alvarez is a world class fighter. He’s never been afraid of anybody.” - AFP