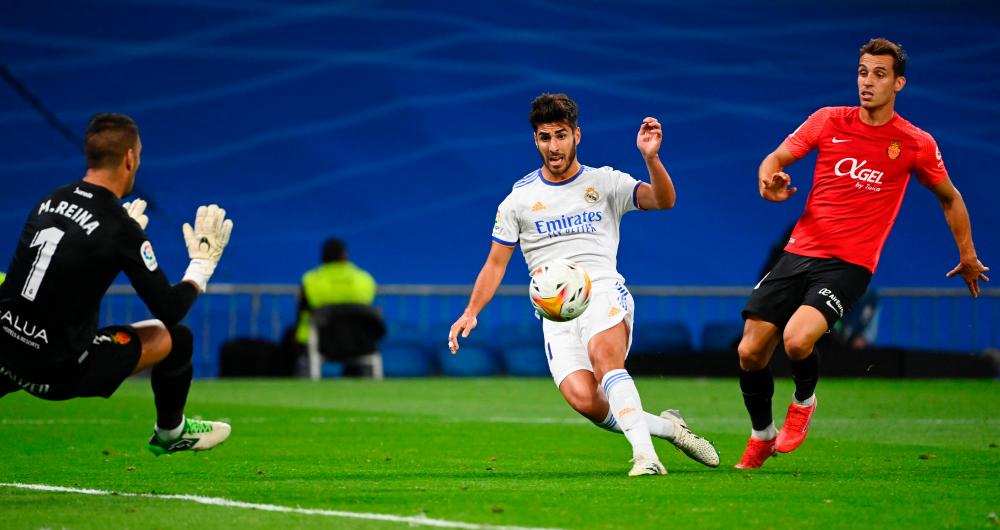 Marco Asensio (centre) scores his team’s third goal during a match with Real Mallorca at the Santiago Bernabeu stadium in Madrid. – AFPPIX

Benzema opened the scoring in the third minute and Asensio netted against his old club in the 24th but the visitors’ South Korean forward Lee Kang-in pulled one back moments later with an outstanding individual run and finish.

Asensio promptly restored Real’s two-goal advantage before the break before completing his first hattrick at club level early in the second half with an emphatic finish, whipping the ball into the bottom corner from outside the area.

Benzema scored for the second time in the 78th minute to make it 200 LaLiga goals for the Frenchman and Isco completed the rout six minutes from time to bring up 21 goals for Real from six games this season, making them the top scoring team in Europe’s top five leagues.

Real top the standings on 16 points from six games, two ahead of second-placed Atletico Madrid.

Mallorca are 10th on eight points.

Real had staged a late turnaround in their last game to beat Valencia 2-1 thanks to strikes in the 86th and 88th minutes from Vinicius Jr and Benzema but they did not need long to get off the mark here.

Benzema pressed Mallorca’s Josep Gaya high up the pitch and cashed in on a poor piece of control from the defender to rob the ball and smash a shot past goalkeeper Manolo Reina.

Asensio also showed sharp reflexes to double Real’s lead, quickly pouncing on the rebound after Reina could only parry a cross from Vinicius.

Spanish forward Asensio was making his first start of the season and was out to make a real impression on Ancelotti.

He linked up with Benzema to make it 3-1 and then proved his ability to score impressive goals from long range to seal his treble but chose not to celebrate against his former club.

“I knew I had to make the most of my chance so I’m happy with the win, the goals and the fact we were able to continue our great start,” Asensio told reporters.

“I think I’ve shown the manager he can count on me, there’s a lot of competition in the squad and when I have the opportunity I have to take it.

“It was a very special game for me as I have a huge amount of affection for Mallorca, the club where I grew up and that shaped me.”

Benzema’s second goal of the game later on oozed class, the Frenchman controlling a through ball with his back before slamming the ball into the net.

Real were still hungry for more after the Frenchman came off, Vinicius tearing into the box from the left wing and squaring for substitute Isco to tuck the ball into the net and score his first league goal in 19 months. – Reuters