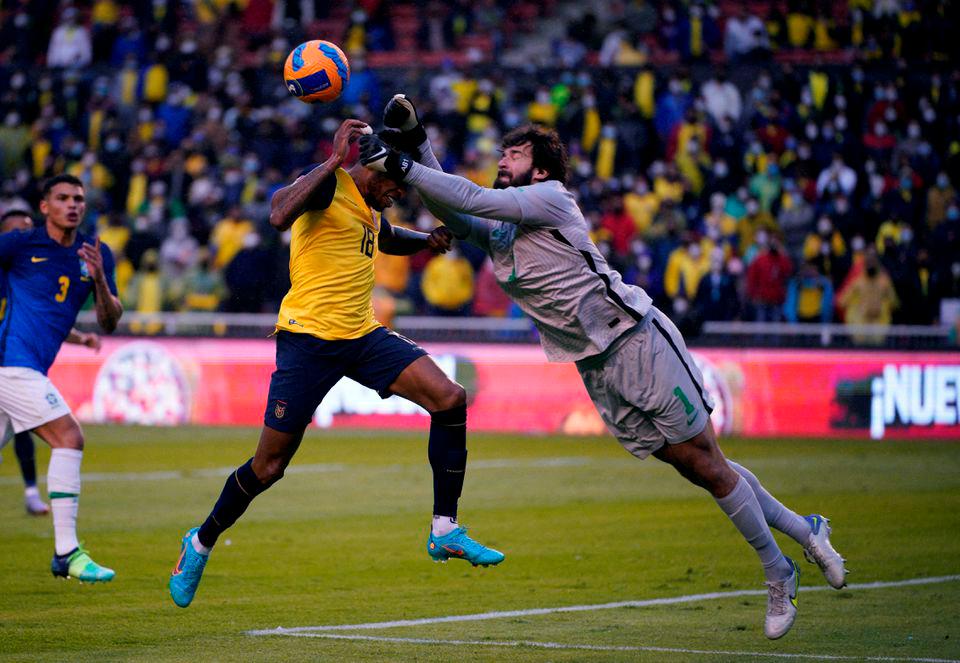 QUITO: Brazil goalkeeper Alisson Becker had two red cards overturned by VAR reviews as Brazil hung on for a controversial 1-1 World Cup qualifier draw with Ecuador on Thursday, with both teams having a player dismissed.

Alisson could count himself lucky after a straight red card in the first half, for a high boot on Enner Valencia, was downgraded to a yellow and then a second yellow card in injury-time was also overturned on review.

Ecuador could be forgiven for feeling aggrieved as four VAR reviews, two to check possible dismissals and two for penalties originally awarded by Colombian referee Wilmar Roldan, all went against the hosts in Quito.

Even so, the point inches them closer to World Cup qualification with three games left.

Casemiro gave the visitors, who were missing the injured Neymar, an early lead but Ecuador center-back Felix Torres equalised 15 minutes from time.

Ecuador should have been in front within two minutes but alone and unmarked at the back post four yards out, Valencia somehow missed the target from Pervis Estupinan’s free-kick.

The hosts made a hash of clearing a corner as Brazil pinged the ball from one side of the box to the other before Philippe Coutinho’s cross was headed goalwards by Matheus Cunha.

Goalkeeper Alexander Dominguez blocked the ball on the line but Casemiro pounced to stab home the loose ball from a yard out.

Ecuador were a mess at the back and Dominguez compounded matters with a rash attempt to reach a Fred through ball before Cunha.

The keeper got his toe to the ball but drove his studs into the forward’s neck with his follow through and was rightly dismissed.

Following a lengthy VAR check to see if the foul was inside or outside the box, Coutinho fired the resulting free-kick high over the bar.

In an eventful start to the match, Emerson Royal was given his marching orders after picking up two yellow cards inside the first 20 minutes as numeric parity was almost immediately restored.

Having also won the ball at head height, he brought his follow through down in an axe kick on Valencia’s head.

But, following a VAR check, Roldan incredibly downgraded the card to a yellow.

Early in the second half, Valencia had another glorious chance to score but headed wide from 12 yards after once again finding space in the box.

Up the other end, Cunha lashed a shot inches wide at the second attempt.

Ecuador had the ball in the net early in the second half through Michael Estrada but it was ruled out after a linesman flagged for the ball going out of play.

Roldan then signalled a penalty after Raphinha appeared to stand on Estupinan’s foot in the box, but for the third time in the match VAR ruled in Brazil’s favor and it was chalked off.

Torres outjumped Casemiro to plant a header into the bottom corner past a helpless Alisson.

Roldan then pointed to the spot for a second time deep into injury time after Alisson connected with forward Ayrton Preciado’s head as he punched clear a bouncing ball.

The referee also showed him a second yellow card but overturned both that and the penalty after another VAR view.

Both halves included more than 10 minutes of additional time due to the lengthy checks.--AFP Love story reaches for the stars

4.Love story reaches for the stars