Cops wrapping up probe into commotion during Sukma football match 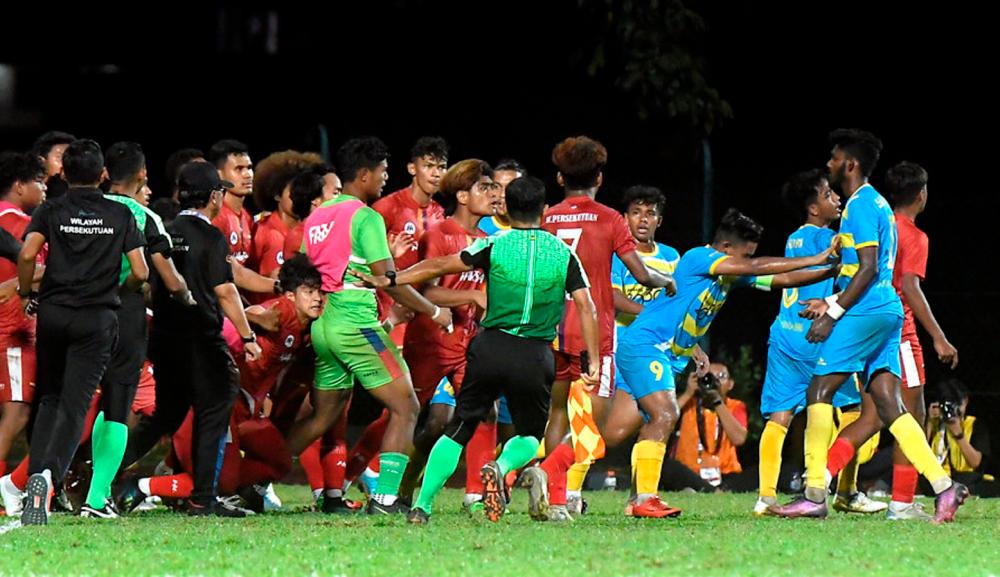 SHAH ALAM, Sept 21 -- A slightly tense situation occurred after the referee waved a red card at a Federal Territories player against the Penang team in the semi-finals of the Malaysia Games (SUKMA) 2022 which took place at the Shah Alam Stadium last night. BERNAMAPIX

SHAH ALAM: Police are in the process of completing their investigation into the commotion that occurred during the Malaysia Games (Sukma) men’s football semi-final between Penang and the Federal Territories (FT) at the Universiti Teknologi Mara (UiTM) Stadium here last night.

Shah Alam District Police chief ACP Mohd Iqbal Ibrahim said they had received reports from those involved and several individuals had also been called up to give their statements, among them the coaches, referee and match officials.

He said preliminary investigation found that the incident occurred after a player was flashed the red card, causing an individual believed to be an official of one of the teams to be upset and, in turn, causing a commotion.

“The game was then stopped for a while due to the commotion and the game resumed after the situation calmed down,” he told reporters after the launching of the book “Korupsi dan Kemunafikan dalam Politik Melayu; Perlunya Disegerakan Transformasi Moral Etika” by Professor Emeritus Tan Sri Dr Mohd Kamal Hassan here today.

Mohd Iqbal also advised those involved in competitions not to become too emotional during matches so as to prevent any provocation or commotion.

The media reported that the Penang-FT became heated when FT’s Muhammad Iman Fakhrullah Zamri was shown the red card in the 88th minute for kicking an opponent and the situation worsened when players began pushing and shoving one another.

An FT official confronted the referee, who then showed him the red card. Upset, the official then chased after the referee when ordered to leave the field.

Meanwhile, commenting on the status of the disappearance of former television newscaster Zalina Shaharah Azman, who has been reported missing since last November, Mohd Iqbal said they have been no new leads regarding the case. - Bernama