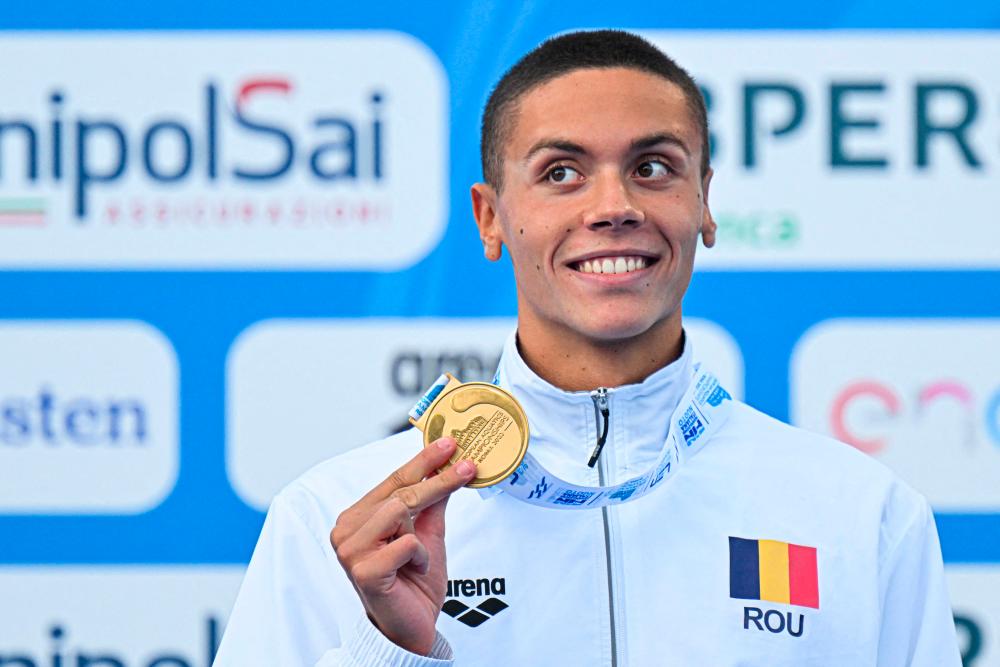 Gold medallist Romania’s David Popovici poses on the podium after winning and setting a new world record of the Men’s 100m freestyle final event on August 13, 2022 at the LEN European Aquatics Championships in Rome. AFPPIX

ROME: As David Popovici has accelerated past his older rivals in the pool this summer, it seemed inevitable that the skinny 17-year-old would threaten world records, the only surprise when he broke the 100m freestyle mark in Rome on Saturday was that he got so quick so fast.

On Friday, the Romanian had become only the fourth man in history to swim under 47sec as he set a European record to win his semi-final at the European Championships in Rome.

That was more than half a second faster than his gold-medal time at the World Championships in June.

On Saturday, he was even quicker, swimming 46.86sec to slice 0.05sec off the record set by Brazilian Cesar Cielo in the 2009 World Championships, also in Rome, in the era of buoyant body suits.

“Yesterday I said that the European record was just one step in the right direction - and I was right. There was no rush and I had to be extremely patient about the world record,“ he said after his victory.

In the World Championships in Budapest, Popovici outpaced Caeleb Dressel, who had swum the fastest 100m in a textile suit, in the heats. The Olympic champion withdrew from the competition before the semis.

“It’s nice being able to say that I am the fastest to ever do it and it’s a good thing to know I clashed with all of the titans of this race.”

His coach, Adrian Radulescu said that he too was surprised by the speed of Popovici's progress.

“It’s amazing that it is happening so early,“ said Radulescu, just 32.

Asked on Thursday what makes him succesful, Popovici acknowledged that success comes at a price.

“When Erling Haaland, a football player, was asked the same question, he replied ‘hard work’ So, it’s just really a lot of hard work and a lot of sacrifice and it all comes down to the question of how badly do you want it; and I really do want it, badly!”

“What are you willing to do that others aren’t? This includes living a completely different lifestyle.”

“Really, all I want to get out of this meet and out of world juniors in Peru is simply having fun. The medals, the records, everything, the good times are simply a bonus. If we manage to have fun, that’s very satisfying,“ he said.

“Everything in sport is fun. Getting extremely tired and then wanting to vomit,“ he said.

“Having all sorts of lactate problems ...that’s fine. It’s not fun at the time but after half an hour you don’t want to kill yourself anymore and you feel as if its all worth it.”

Popovici was nine when he joined the swimming club where Radulescu coaches.

“He wasn’t the easiest to train, he was mostly looking for fun, to skip his turn...But there was something special about him, he was very competitive.”

“He must have been ten years old, we were organising a competition for swimmers of the same age,“ recalled the coach. “A 25-metre swim and the last one was eliminated...Each time, David finished second last. Ahead of him, they wanted to prove that they were good, they got tired. In the final race, the other survivor was so tired, David won.”

Popovici is unusually thin for a top swimmer.

“David has a keen sense of water,“ said Radulescu. “It’s not about how much force you can generate, but how you can put it into the speed you develop. So, yes, he is very thin, but he has enough strength to swim at higher speeds.”

But, added, the coach, Popovici's physique will change.

“He’ll be 18 in September, his body will grow, evolve to a man’s size. It’s a challenge ...to get the right balance between strength and efficiency.”

Popovici already has a nickname: 'The Magician'.

“I was passionate about magic when I was younger, the card tricks and illusions and stuff but not anymore. It was a little hobby before swimming,“ he explained.

“But yes, some people have called me The Magician because of what I do in the pool but again, I don’t think it represents me. I like to think of myself as a simple guy who just swims fast.” - AFP