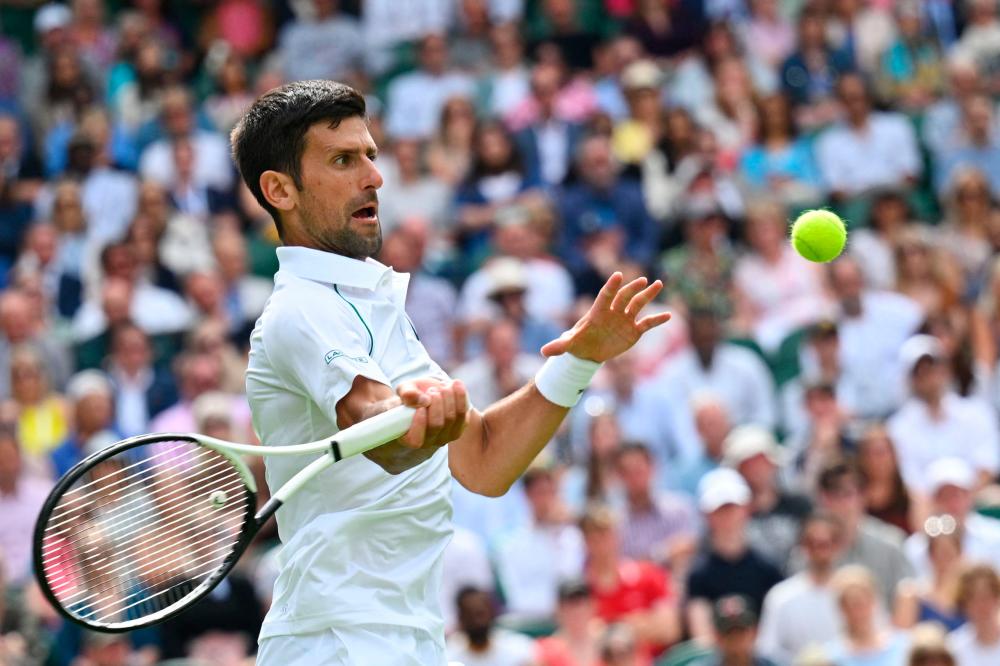 Serbia’s Novak Djokovic returns the ball to Australia’s Thanasi Kokkinakis during their men’s singles tennis match on the third day of the 2022 Wimbledon Championships at The All England Tennis Club in Wimbledon, southwest London, on June 29, 2022. AFPPIX

Kecmanovic, 22, has lost both his previous two meetings against the man he describes as his “idol”.

However, with 2002 Wimbledon runner-up David Nalbandian in his coaching team, he is enjoying a breakout season.

Kecmanovic enjoyed career-best runs to the last 16 at the Australian Open and third round at Roland Garros.

He has also broken into the top 30 for the first time.

Djokovic, bidding to join Pete Sampras as a seven-time Wimbledon champion, is in the third round at the All England Club for the 16th time.

Second-round victim Thanasi Kokkinakis took just seven games off the 35-year-old and admitted: “I got chopped.”

Waiting in the fourth round will be Dutch wild card Tim van Rijthoven.

The 25-year-old Van Rijthoven proved his prowess on grass by winning the 's-Hertogenbosch title last month, defeating world number one Daniil Medvedev in the final.

“My serve is working fantastic, I have only dropped serve a couple of times in my last eight matches,“ said the Dutchman.

“If I play Djokovic, it will be a dream.”

Isner may be 37 but his power on a grass court remains undiminished.

The giant American has unleashed 90 aces in two rounds so far, including 36 in his defeat of two-time champion Andy Murray in the second round.

Isner, a semi-finalist in 2018, has 13,724 career aces to sit just four behind the all-time record held by Ivo Karlovic.

He faces Italian 10th seed Jannik Sinner for a place in the fourth round.

“It’s not going to put me in the Hall of Fame or anything like that, because that’s not me,“ said Isner.

“But I will be the all-time leader. I’ll keep playing, keep adding to my total. I don’t know if it will get broken. I could be up there for a long time.”

At the other end of the age scale, Spanish teenager Carlos Alcaraz targets the last 16 for the first time when he faces Germany's Oscar Otte.

Alcaraz needed five sets to see off Jan-Lennard Struff in the first round before sweeping past Tallan Griekspoor.

“I need more hours on court, on grass, to feel more comfortable,“ said the 19-year-old.

Otte should be the fresher of the two.

In the bottom section of Djokovic's draw, only three seeds have survived.

Three of the top 10 women's seeds -- Anett Kontaveit, Danielle Collins and US Open champion Emma Raducanu -- failed to make the last 32 from their half of the draw.

But former French Open winner Jelena Ostapenko, a semi-finalist at the All England Club in 2018, progressed.

The Latvian took her winners count to 102 over three rounds by defeating Irina-Camelia Begu of Romania 3-6, 6-1, 6-1.

Germany's Jule Niemeier followed up her win over Kontaveit to make the last 16 by seeing off Ukraine's Lesia Tsurenko 6-4, 3-6, 6-3.

Greek fifth seed Maria Sakkari tackles Germany's Tatjana Maria, one of three mothers who started out in the tournament.

Sakkari is attempting to reach the last 16 for the first time. 2.Police must uphold ideals of independence, be ready to face security threats: IGP