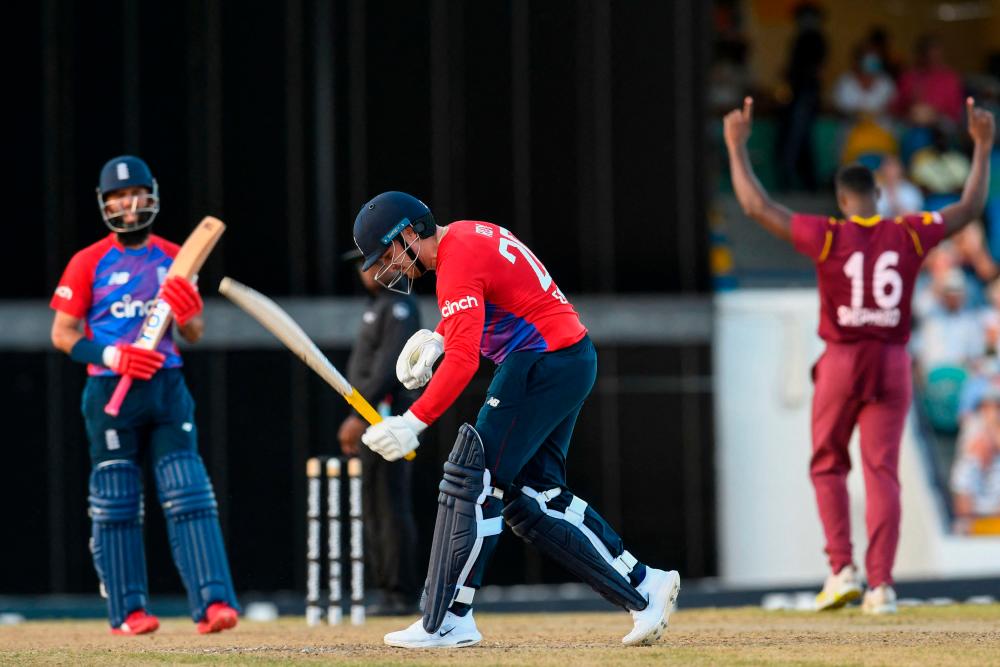 Jason Roy (C) of England is dismissed on 45 by Romario Shepherd (R) of West Indies during the 2nd T20I between West Indies and England at Kensington Oval, Bridgetown, Barbados, on January 23, 2022 AFPPIX

BARBADOS: England overcame a late-order rally by Romario Shepherd and Akeal Hosein to beat the West Indies by just one run in the second Twenty20 international at Bridgetown on Sunday.

The West Indies appeared down and out when they needed 61 runs from the final three overs to reach a target of 172, with only two wickets standing.

But from 111 for eight, Shepherd and Hosein, who both made 44 not out in an unbroken stand of 72, almost denied England the win that levelled the five-match series at 1-1.

Chris Jordan and Saqib Mahmood were repeatedly hit for boundaries, although the recalled Reece Topley conceded just eight runs in the 19th over.

West Indies, who had slumped to 65 for seven, needed 30 to win off the last over, bowled by Mahmood.

The paceman started the over with a wide and was lucky not to be called again with his next delivery.

England captain Eoin Morgan was pleased by the way a team, without several T20 regulars, clung on to victory.

“I was delighted and even with the last quarter, with a relatively inexperienced international side, those are the games you want to play in,“ he said.

But Pollard was proud of the fight shown by his side.

“I can see the confidence with the guys in the changing room,“ he said. “We will have days like this but my thing is the fight that the guys continue to show.”

England were bowled out for just 103 on Saturday as the West Indies cruised to a nine-wicket win.

But it was a different story when the teams returned to the Kensington Oval a day later, with England making 171 for eight featuring opener Jason Roy's 45.

Moeen was named player of the match after also making 31 with the bat, with Barbados-born Jordan's 27 helping England to a competitive total.

Recalled left-arm quick Reece Topley had reduced the West Indies to six for two by having Brandon King, who made an unbeaten fifty on Saturday, lbw for a duck and running out fellow opener Shai Hope. - AFP