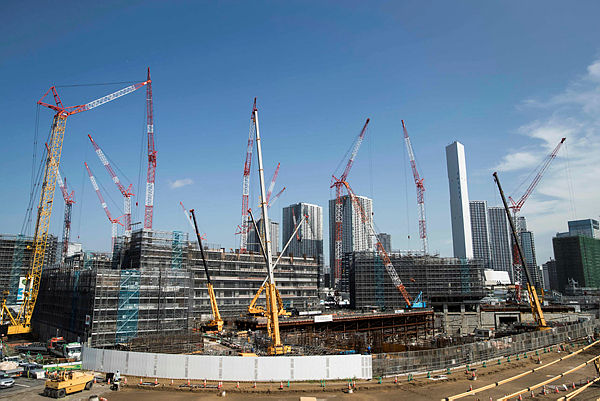 This file photo taken on Sept 5, 2018 shows the Olympic Village under construction, for the upcoming Tokyo 2020 Olympic Games, in Tokyo. — AFP

TOKYO: Should weather forecasting satellites or roomy black cabs with distinctive logos be included in a country’s Olympic budget?

That is a problem Japan and Tokyo 2020 organisers are wrestling with as they try to work out just how much they will end up spending on the Olympics.

Organisers will unveil the latest version of their budget on Friday and they face intense pressure to keep costs down.

The current budget for the Games — last updated this time last year — stands at 1.35 trillion yen (RM50.5 billion) and organisers have pledged it will not increase.

“We can’t exceed the level of the previous version of the budget,“ said Tokyo 2020 CEO Toshiro Muto at a recent news conference, amid concerns that ballooning costs are putting off potential Olympic host cities.

But a dispute has erupted over what exactly counts as Olympic spending.

Of the 1.35 trillion yen, the organising committee stumps up 600 billion, the Tokyo city government the same amount and the central Japanese government 150 billion — mainly to build a new national stadium.

But a report from government auditors made headlines in October when it revealed that a budget-busting 800 billion yen had been allocated by government ministries and agencies in the five years to March 2018.

According to the report, the central government has allocated funds for 286 projects — ranging from the operation of the weather satellites to subsidies for hydrogen stations for fuel-cell vehicles.

“I think it’s too much to say that these are Olympics-related,“ Muto has said.

The government’s top spokesman Yoshihide Suga has stressed Japan’s commitment to an Olympics with a “compact” budget.

The problem is that “there is no right or wrong” way to calculate capital spending relating to the Olympics, said Holger Preuss, professor of sports economics at the Johannes Gutenberg University in the German city of Mainz.

There is also no generally agreed global standard for auditing Olympic spending, he added.

“That is always a matter for the country staging the games, as it is culturally different throughout the world,“ he told AFP.

Deciding what is directly linked to the Games is “a grey zone,“ said the expert.

Following the row sparked by the auditors’ report, the government commissioned a study into the projects and split them into three categories according to how closely they were linked to the Games.

Of the 800 billion yen allocated, some 173 billion yen were considered category A or directly linked to the Games.

A massive 546 billion yen were for projects in category B where the contribution to the Games was deemed difficult to assess.

This included subsidies for hydrogen and other eco-friendly cars and bigger taxis with the Tokyo event logo as well as efforts to promote tourism.

A further 82 billion yen were classed as category C or having a low link to the Games — for example the weather satellites.

An audit official said their report was designed to serve as a warning shot.

“If there are expenses clearly related to the Olympics, they should be made public for transparency,“ the official, who spoke on condition of anonymity, told AFP.

“We want the government to announce the entire picture of the relevant costs,“ he added.

The biggest headache for getting to grips with an Olympic budget is infrastructure spending, according to Andrew Zimbalist, economics professor at the US-based Smith College.

“Of course, the International Olympic Committee likes to claim that when roads or metros are built that they benefit a city’s overall economic development and should not be counted as part of the Olympic budget,“ he told AFP.

“This is partially and sometimes true, but more often the infrastructure investment is not appropriate given the city’s needs and resources,“ he said.

Mindful of public anger over soaring Olympic bills, the IOC has introduced its “new norm” — a set of reforms designed to bring down costs, such as reducing venue sizes and using existing infrastructure wherever possible.

But Zimbalist was sceptical this is happening in Tokyo.

“I believe that, fully accounted, the costs of Tokyo 2020 are easily above US$20 billion. The IOC simply forced many items off the Olympic budget to lower the publicised cost to around US$12 billion,“ he said.

“This is nothing less than accounting chicanery,“ he told AFP.

In a separate op-ed article for Forbes, he urged the IOC to adopt a “new business model.”

“It makes little sense for a new city to rebuild the Olympic Shangri-La every four years.” — AFP