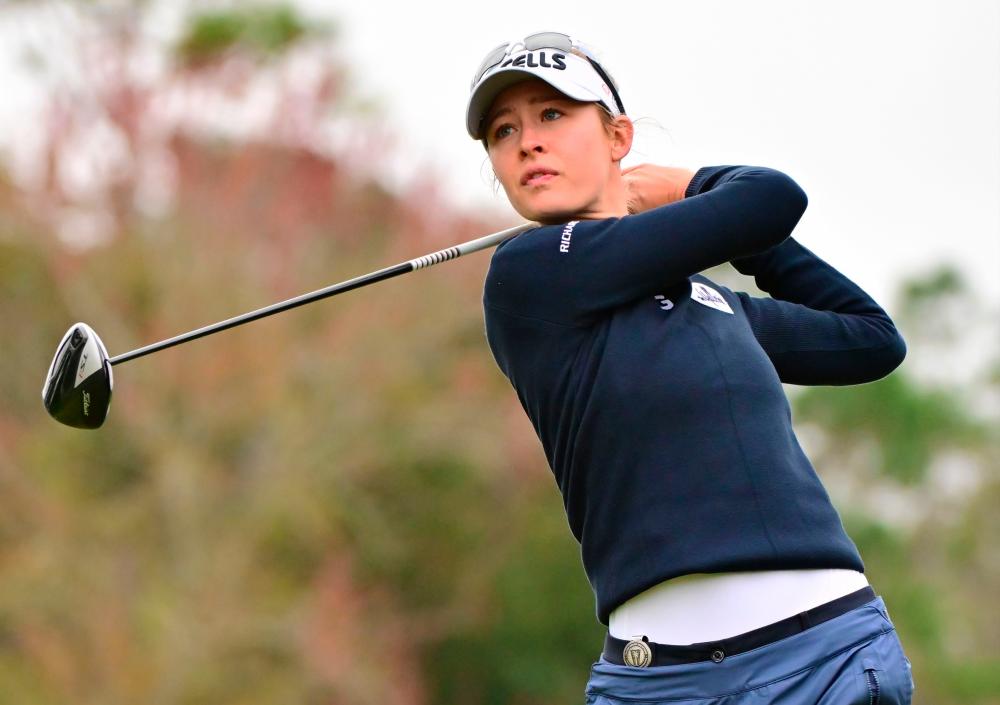 MIAMI: World number one Nelly Korda (pix) notched four birdies in a three-under par 69 on Saturday to maintain her one-shot lead in the US LPGA Tour’s Tournament of Champions in Florida.

The 23-year-old American is picking up in 2022 right where she left off in 2021, a breakout season launched with her victory in the Gainbridge LPGA 11 months ago on the same Lake Nona Golf and Country Club course hosting this week’s event in Orlando.

She steered a steady course on Saturday in chilly, windy weather that had the course playing some two shots tougher than it did on Friday.

“Oh, my gosh, so much tougher,” said Korda, who finished the round bundled up in a puffer coat.

“I mean, you put the cold weather in and a bit of wind it makes it a lot tougher — especially with all these layers on.”

But Korda led by as many as three shots at one point on Saturday, with birdies at the third, seventh and 11th before her lone miscue of the day at the 12th.

She missed the green at the 14th but chipped to about four feet and made that putt for her last birdie of a day, and her 13-under total of 203 kept her a shot in front of American Danielle Kang and Mexico’s Gaby Lopez.

Both Kang and Lopez fired three-under 69s to maintain their tie for second.

Canadian Brooke Henderson had four birdies in a four-under par 68 and was alone in fourth on 205, one stroke in front of Japan’s Yuka Saso, who also carded a 68.

Kang, the 2017 Women’s PGA Champion, lost a playoff in this event to Jessica Korda, Nelly’s elder sister, last season when it was held at a different Florida venue.

On Saturday she played without a bogey, posting birdies at the fifth 13th and 14th — where she drove the green and two-putted.

Lopez, who led after the first round, also had three birdies without a bogey, rolling in a birdie putt at 18 to retain a share of second place.

Despite the more difficult conditions, Nelly Korda was relishing the pro-am format that has the elite field of 29 playing alongside 50 celebrity amateurs.

“Definitely keeps it a little bit more relaxed,” she said. “Hopefully I can put together another solid round tomorrow.”

With more wind in the forecast, Korda said a key on Sunday would be “making sure I”m staying consistent off the tee and giving myself some good looks at birdies.”

But, she added, “par will go a long way out here in this weather.” — AFP