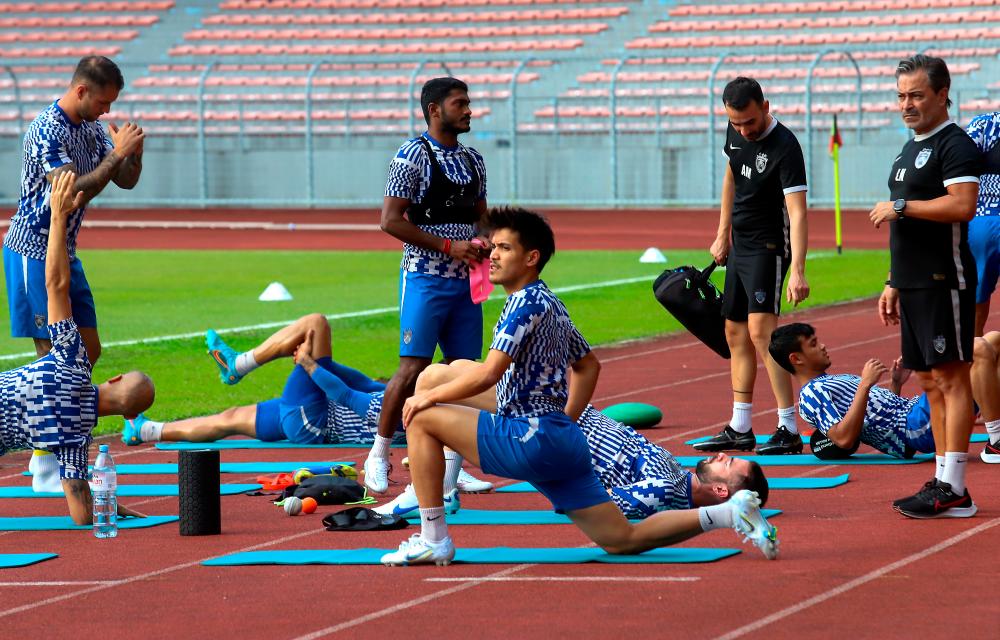 KUALA LUMPUR, Nov 24 -- The players from the Johor Darul Ta’zim (JDT) Football Team during a training session for the Malaysia Cup 2022 at the Cheras Stadium today. BERNAMAPIX

KUALA LUMPUR: Johor Darul Ta’zim (JDT) has only one objective in the 2022 Malaysia Cup final against Selangor FC at the National Stadium in Bukit Jalil here tomorrow night, which is to emerge champions and complete a domestic treble for the first time.

JDT head coach, Hector Bidoglio said winning the Malaysia Cup was very important for the Southern Tigers despite having already won the Super League and the FA Cup this year as well as the Charity Shield (Piala Sumbangsih) match before the start of the new season.

“The game tomorrow will be difficult, it’s a final and to arrive here was very difficult....but the players are good, they are very happy because we are playing another final and this is not just for us to play.

“This (Malaysia Cup) is very important for JDT...to win four cups in a year is very difficult, we will take full responsibility and we will give everything inside the field to try to win the trophy,” he said during the pre-match press conference here, today.

However, the Argentine gaffer who won the FA Cup last September after about a month and a half being appointed as JDT head coach admitted that the strength of Selangor, guided by the former national team boss, Tan Cheng Hoe, should not be underestimated.

“Lots of good things on Selangor’s side, they are a very strong team, are very strong in defence and very good in set pieces. They scored three goals in the first leg semi-final against Terengganu FC...so it’s gonna be tough and we must try to use their weaknesses to make us strong,” he said.

Meanwhile, JDT skipper Mohd Farizal Marlias, one of the most experienced goalkeepers in the country, said all the players were ready to make up for the disappointment of losing the Malaysia Cup final to Kuala Lumpur City FC last year.

Still reliable and agile at the age of 36, Farizal hopes the final will be played under good weather conditions so that the players will be able to showcase an exciting brand of football to appease the fans.

“The condition of the pitch is very important because if it rains and the field is water-logged, both teams will not be able to produce an exciting game,” he said.

The head-to-head record between both teams over the past five matches favours JDT which has three wins and two draws. - Bernama