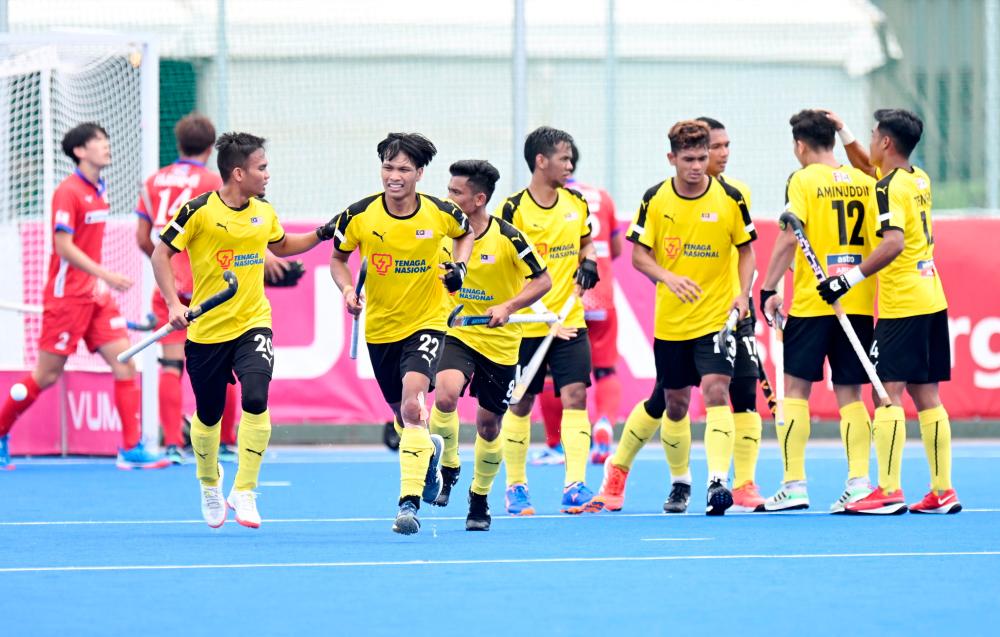 KUALA LUMPUR: The national men’s hockey squad confirmed their slot in the semi-finals of the 2022 Men’s International Hockey Federation (FIH) Nations Cup after thrashing Japan 5-1 in the final Group B fixture in South Africa today.

The victory saw the squad led by A. Arul Selvaraj collect six points to finish second behind South Korea, with nine.

In the match held at the NWU Astro Stadium in Potchefstroom today, the national team opened the scoring in the second minute through Muhammad Najib Abu Hassan’s field goal, before Japan equalised through Kosei Kawabe’s field goal in the fifth minute.

Stunned by the goal, the ‘Speedy Tigers’ continued to launch a series of attacks which finally paid off when Muhammad Aminuddin Mohd Zain completed a penalty corner in the 23rd minute, before Faizal Saari scored the third from open play in the 34th minute.

Malaysia - ranked 10th in the world - continued to display an excellent performance, scoring the fourth goal in the 39th minute through Muhammad Najib, before Mohamad Ashran Hamsani scored the fifth a minute later to seal the game.

Head coach Arul Selvaraj said the win shows that the maturity and quality of the National players is improving as they are able to remain resilient to overcome their Japanese opponents until the final minutes.

“A win to be proud of and that too a big win for the country. Before this we have played against Japan twice and both times won 5-0 and 4-2. Today we beat them 5-1 and such results can serve as a confidence booster in the event that we play against Japan again.

“...and as for defending penalty corners, we allowed easy access for Japan but we managed to defend all eight penalty corners awarded to them, well. This is the result of work done during the pre-match meeting to study and analyse ways to defend Japan’s penalty corner attempts and today we executed that well,” he said in a video recording that was made available to the media.

He said the Speedy Tigers need a good rest and start preparing for another excellent performance in the semifinals against Ireland on Saturday (Dec 3). - Bernama 2.Trees could cut urban heatwave mortality by a third: Study

3.Half a million strike in UK’s largest walkout in 12 years