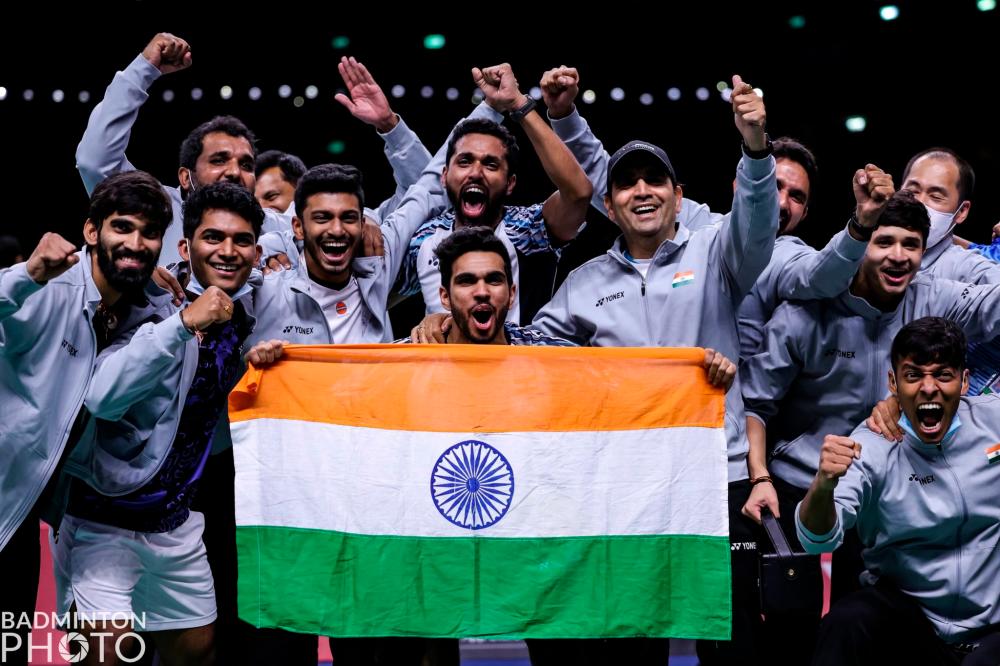 BANGKOK: What a fairytale ending!

India have completed one of the most remarkable achievements in sports when they blew away reigning champions and 14-time winners Indonesia 3-0 in a pulsating final to clinch their maiden Thomas Cup crown in the 2022 edition at the Impact Arena here today.

Although world number nine Lakshya was completely outclassed by world number five Anthony 8-21 in the first game, the Indian shuttler managed to regain his composure and stage an astonishing comeback to win the next two games to give India a flying start.

Indonesia have only themselves to blame after their first doubles pair of Mohammad Ahsan-Kevin Sanjaya Sukamuljo, who beat Satwiksairaj Rankireddy-Chirag Shetty 21-18 in the first game, somehow crumbled in the next to games.

Credit to Satwiksairaj-Chirag for not capitulating but, instead, turning the tables on the Indonesians to win the next two games 23-21, 21-19 in a nail-biting match that lasted 73 minutes to tighten India’s grip on the prestigious Cup.

Buoyed by Lakhsya and Satwiksairaj-Chirag’s splendid displays, India’s second singles, Srikanth Kidambi then dug deep into his reserves to deny Indonesia a way back by outlasting Jonatan Christie 21-15, 23-21.

The 29-year-old Guntur-born former world number one, however, had to slog it out with the gutsy Jonatan before sealing victory that sparked pandemonium in the Indian badminton camp.

The moment Srikanth earned the winning point - courtesy of a smash to Jonatan’s left - will forever be etched in the minds of all India supporters.

And as Jonatan sank to his knees in despair, a jubilant Srikanth was mobbed by his ecstatic teammates and officials as they danced and jumped for joy on the court.

A beaming Srikanth, when met by reporters, said he was pleased to see everyone play his part to ensure India emerged as champions today.

“I was extremely happy and glad to see my teammates stepping up to beat Indonesia and win our first Thomas Cup,” he said.

Lakshya, who suffered from food poisoning ahead of the tournament and which took a toll on his performance leading up to the final, admitted that he never thought that India could go this far.

“My dad’s presence in the stadium truly pumped me up to deliver the first point for India,” he said.

India began their magical journey by winning their first two games against Germany and Canada with identical 5-0 scorelines before losing lost their final match against eventual Group C champions Taiwan 2-3.

India then defied the odds to edge Malaysia 3-2 in the quarter-finals before stunning 2016 champions Denmark, also 3-2, in the last four, en route to being crowned the new kings of badminton in the world’s most prestigious team tournament here.

India now join the likes of Indonesia, China, Malaysia, Denmark and Japan as countries that have won the Thomas Cup since the inaugural Finals in 1949. - Bernama