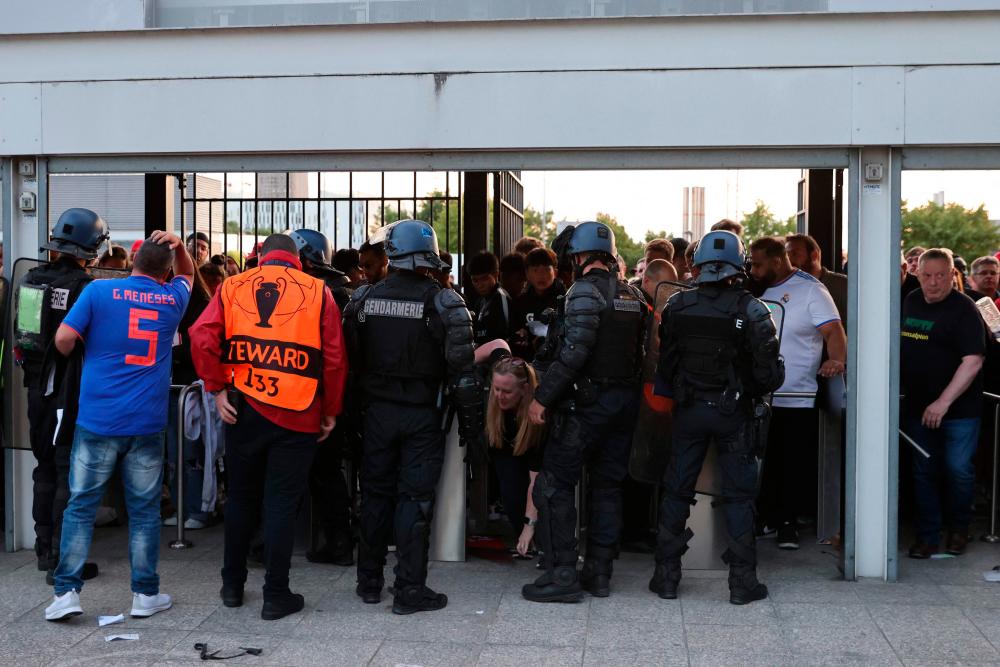 Police patrol at the gates as some fans were prevented form getting inside prior to the UEFA Champions League final football match between Liverpool and Real Madrid at the Stade de France in Saint-Denis, north of Paris, on May 28, 2022. AFPpix

PARIS: European football governing body UEFA blamed “fake tickets which did not work in the turnstiles” for a 35-minute delay to Saturday’s Champions League final between Liverpool and Real Madrid in Paris, but the English club heavily criticised the treatment of their supporters.

UEFA said French police had fired tear gas to disperse thousands of frustrated fans who were building up outside the Stade de France as a result of the fake tickets issue.

But Liverpool said they were “hugely disappointed” that their supporters had been subjected to an “unacceptable” breakdown of the security perimeter at France’s national stadium.

The final of Europe’s most prestigious club competition was supposed to kick off at 9:00pm (1900 GMT) but was pushed back due to the queues of mainly Liverpool fans who could not get into the ground.

“In the lead-up to the game, the turnstiles at the Liverpool end became blocked by thousands of fans who had purchased fake tickets which did not work in the turnstiles,“ UEFA said in a statement.

“This created a build-up of fans trying to get in. As a result, the kick-off was delayed by 35 minutes to allow as many fans as possible with genuine tickets to gain access.

“As numbers outside the stadium continued to build up after kick-off, the police dispersed them with tear gas and forced them away from the stadium.”

UEFA said they were “sympathetic” to the fans affected and would review the situation together with local police and authorities, as well as the French Football Federation.

Some of the supporters with valid tickets did not get into the ground until the end of the first half.

“Thousands of British ‘supporters’ either without tickets or with fake ones forced their way through and sometimes behaved violently towards the stewards,“ he tweeted.

Police fired tear gas after several dozen people attempted to climb over barriers, according to an AFP reporter on the scene, with security staff having to round up about 20 fans who succeeded in clearing the fence and getting into the ground.

Thousands of supporters were still massed outside the stadium with half an hour to go to kick-off.

Liverpool, however, were adamant fans had been badly treated ahead of a match that Real won 1-0 thanks to Vinicius Junior’s 59th-minute goal.

“We are hugely disappointed at the stadium entry issues and breakdown of the security perimeter that Liverpool fans faced this evening at Stade de France,“ the English club said in a statement.

“This is the greatest match in European football and supporters should not have to experience the scenes we have witnessed tonight.

“We have officially requested a formal investigation into the causes of these unacceptable issues.”

Liverpool fans were incensed, including Pete Blades, who said he had felt he was revisiting the Hillsborough disaster of 1989, which cost the lives of 97 Liverpool fans.

“I haven’t done anything wrong, I’m not a threat. The police pushed me at the door, that wasn’t necessary, a girl’s nose was bleeding. They were expecting an army against them.

“I was at the Hillsborough disaster in 1989 and today it was exactly the same. They opened and shut the gates.

Football Supporters Europe, a lobby group, said fans were not to blame for the “fiasco” at the Stade de France, while Kelly Cates, the daughter of Liverpool legend Kenny Dalglish, described the pre-match scenes outside the ground as “absolutely shambolic”.

Nearly 7,000 police were deployed for the event to deal with between 30,000 and 40,000 Liverpool fans thought to have travelled to Paris without tickets.

A fan zone with a capacity of 44,000 was set up for them on an avenue in the east of the French capital.

French police said early Sunday they had arrested a ticket tout who had been selling around 50 fake tickets near the Liverpool fan zone. — AFP