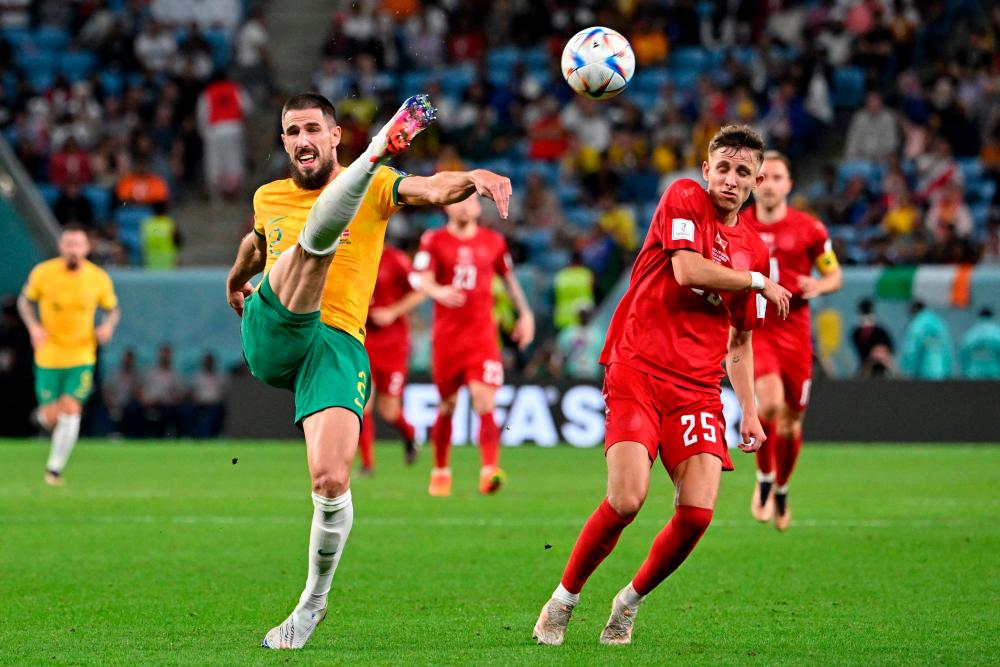 Australia’s defender #02 Milos Degenek fights for the ball with Denmark’s midfielder #25 Jesper Lindstrom during the Qatar 2022 World Cup Group D football match between Australia and Denmark at the Al-Janoub Stadium in Al-Wakrah, south of Doha on November 30, 2022. AFPPIX

DOHA: Australia coach Graham Arnold hailed the Socceroos’ “remarkable” achievement after they reached the last 16 of the World Cup for only the second time with a 1-0 win over Denmark on Wednesday.

Winger Mathew Leckie scored the winner on the hour with a smart run and finish to extinguish Denmark's Qatar hopes at the group stage.

Australia, who made the knockout rounds in 2006 when they had Harry Kewell, Tim Cahill and Mark Viduka in their ranks, have now won back-to-back World Cup games for the first time.

They progressed to the knockouts behind holders France in Group D and will play the winners of Group C. Poland are top of that group going into the final round of matches.

The current Australia team do not have the stars of yesteryear but they make up for it with spirit and hard work, and showed flashes of quality in a strangely subdued encounter.

“I am just so proud of the players’ work ethic, their commitment, their fight,“ said Arnold, who was assistant to Guus Hiddink during Australia’s run to the last 16 in Germany in 2006.

“We had some moments there (against Denmark) but defensively we were outstanding tonight.”

The 59-year-old, whose side were thumped 4-1 by France at the start of the tournament, added: “I truly believe that the Socceroos are the team that unite the nation.”

“Maybe we are talking about a new ‘golden generation’ now,“ he added, in a nod to the stars of 16 years ago.

European Championship semi-finalists Denmark, who had to win to stand any chance of going through, were on top in the early stages.

Denmark's Mathias Jensen, the Brentford midfielder, shot powerfully at goal and was denied by goalkeeper Mathew Ryan in the 11th minute.

Socceroos captain Ryan was in the thick of it again soon afterwards, frantically hacking the ball away with his feet after an incisive run down the left by Joakim Maehle.

Australia were just about on top when a sterile first-half meandered to a goalless conclusion.

Australia and Denmark both made one change at the break and spectators at Al Janoub Stadium would have been hoping it might trigger a bit more action.

Jackson Irvine scooped over the bar shortly after the restart for Australia and then the news filtered through that Tunisia had taken a surprise 1-0 lead over a weakened France team in the 58th minute.

Australia now needed to score and on the hour mark they did just that.

Leckie found himself one-on-one with an exposed Maehle on the left and turned him inside out before pinging the ball into the bottom corner past goalkeeper Kasper Schmeichel. Cue pandemonium from the Australian bench.

The 31-year-old Leckie said he was so overcome with emotion that he did not know how to celebrate.

“I didn’t really know what to do so I just pounded my chest,“ he said, as Australia’s substitutes poured off the bench to congratulate him.

“It just shows what a team we are, everyone is here for each other.”

Denmark are 10th in the FIFA rankings and following their run to the last four at the Euros last year, had been touted by some as dark horses in Qatar.

Coach Kasper Hjulmand was at a loss to explain how his team had exited the tournament with just a solitary point.

They barely put up a fight as their World Cup hopes slipped away.

“It really irritates and frustrates me, and I am really sad,“ he said.

Hjulmand added: “There is no doubt that we did not reach our level... it is my responsibility. There was too much emotion and too little quality.”

“All my waking hours I tried to prepare as best I could,“ he said. “There was a lack of enthusiasm and coherence... where did that come from?” - AFP