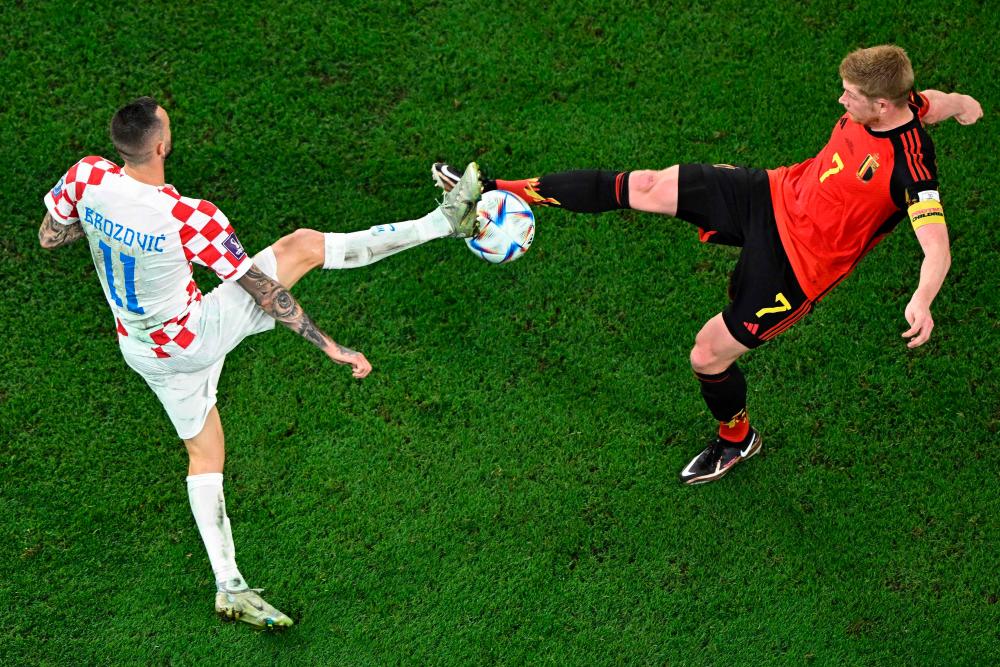 DOHA: Belgium's star-studded team crashed out of the World Cup on Thursday after a goalless draw with 2018 finalists Croatia, who qualified for the last 16 along with Morocco.

In the late kick-offs in Qatar, four-time champions Germany face a nerve-wracking encounter against Costa Rica, needing a win to stand any chance of avoiding a second straight group-stage elimination.

Belgium's exit was painful, with their players slumping to the turf after substitute Romelu Lukaku failed to capitalise on a string of gilt-edged chances.

Instead it was Luka Modric's Croatia who celebrated, qualifying for the knockout stage as the second-placed team in Group F, with five points.

Morocco beat Canada 2-1 to top the group with seven points, reaching the last 16 for the first time in 36 years.

The Belgians, knowing victory would take them through, poured forward in the second half in frantic search of a winner but fell agonisingly short.

Lukaku smashed the ball against the post around the hour mark and squandered other chances to the disbelief of Belgium's fans at the Ahmad Bin Ali Stadium.

With just moments remaining he seemed certain to score from close range but could only chest the ball into the arms of Croatia goalkeeper Dominik Livakovic.

The 2018 semi-finalists head home after an embarrassing campaign in which they scored just one goal.

Belgium were stalked by rumours of in-fighting and a number of the country’s “Golden Generation” including Kevin De Bruyne, Eden Hazard and Thibaut Courtois may have played on the biggest stage for the final time.

In the aftermath of their exit, Belgium coach Roberto Martinez announced he was leaving his job.

“That was my last game with the national team, I can’t carry on,“ Martinez said. “It’s the time for me to accept that this is the last game.”

Croatia captain Modric, whose team were surprise finalists in Russia four years ago, said he was “overjoyed” to progress.

“We deserved that with the game we played,“ he said. “We lived through some very difficult moments as we were playing against a great team.”

Morocco made it through to the knockouts for the first time since 1986, thanks to first-half goals from Chelsea star Hakim Ziyech and Youssef En-Nesyri at the Al Thumama Stadium.

Canada, already eliminated before the final round of group games, cut the deficit through an own goal but Morocco held on to win.

“It wasn’t easy, but when you have an opportunity to make history, you remember it,“ said coach Walid Regragui.

“We’ve made lots of people happy this evening, but let’s not stop here.

“Before the tournament we set an objective -- we said we wanted to give everything we’ve got and get out of the group stages. We can tick that box now.”

Germany must beat Costa Rica to stand any chance of progressing from Group E and even then goal difference could still be a factor if they are to avoid a second successive exit at the group stage.

Costa Rica were hammered 7-0 by Spain in their first game but they proved their mettle with a 1-0 win over Japan.

Germany coach Hansi Flick has laughed off suggestions he would lose his job if his side were knocked out.

“You never know what’s around the corner but I am looking forward to Germany’s home European Championship (in 2024),“ he said.

Spain are not yet assured of their place in the last 16 -- a loss to Japan would put the Japanese through and could allow Germany or Costa Rica to overtake them.

Uruguay forward Luis Suarez, speaking on the eve of his side's must-win match against Ghana, refused to apologise for his infamous handball at the World Cup 12 years ago.

The South Americans take on the Africans in repeat of the notorious quarter-final in South Africa in 2010.

Suarez deliberately handled the ball on the line at that tournament to prevent a certain goal from Dominic Adiyiah's header right at the end of extra-time.

Suarez was shown a red card but Asamoah Gyan missed the subsequent penalty and Uruguay went on to win the shoot-out and qualify for the semi-finals.

“I don’t say I apologise about that because I take the handball but the Ghana player missed the penalty, not me,“ he said. - AFP