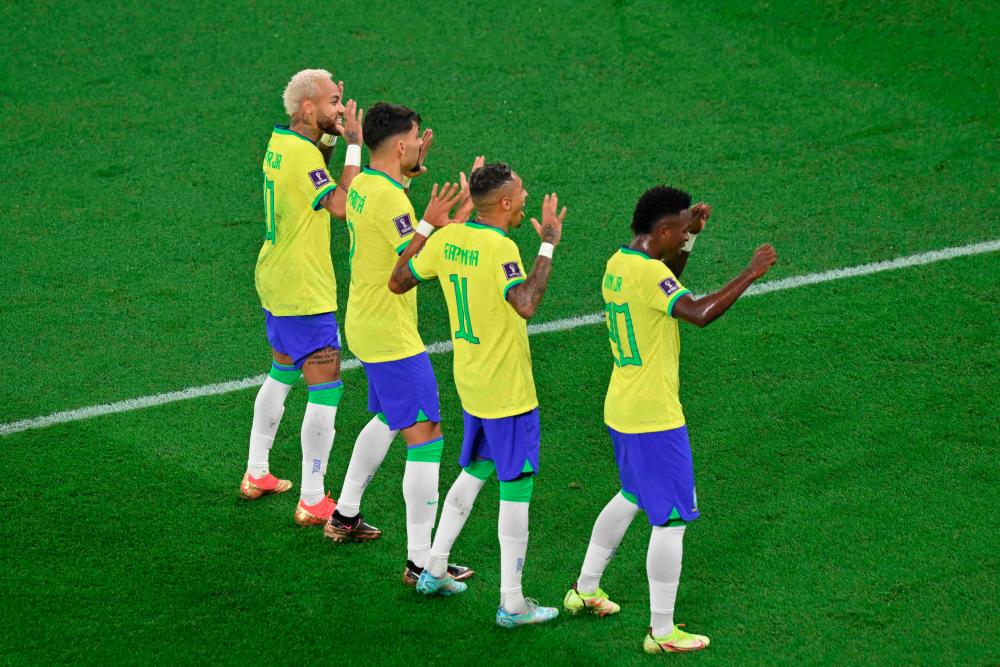 Vinicius Junior celebrates scoring his team's first goal with Raphinha, Lucas Paqueta, and Neymar during the Qatar 2022 World Cup round of 16 match between Brazil and South Korea at Stadium 974 in Doha on December 5, 2022. AFPPIX

DOHA: Brazil’s Vinicius Jr said they would not stop dancing to celebrate goals at the World Cup as it was an expression of happiness that was part of Brazilian culture.

Brazil thrashed South Korea 4-1 in their World Cup last-16 match on Monday, but it was not just their footballing masterclass that caught the eye.

Brazil’s dancing celebrations as the goals flew in sparked criticism from pundits like former Manchester United midfielder Roy Keane, who felt it was ‘disrespectful’, which generated a viral discussion online.

“Sure, some love to complain when they see other people’s happiness and we Brazilians are a joyful people, so it will always bother,” Vinicius told a news conference yesterday.

“The goal is the most important moment in football, in a World Cup it is even more important so it’s a moment of joy not only for us, players, but for our entire country.

“We still have many celebrations ready, so we need to keep playing better, winning games and stay joyful in the process.

“We need to stay calm and focus because there are more people with us than against us.”

Even ever-serious Brazil coach Tite joined in the celebrations, with an awkward imitation of striker Richarlison’s ‘pigeon dance’.

Brazil’s players rushed over to the dugout after Tottenham forward Richarlison put the five-times world champions 3-0 up inside 30 minutes and Tite briefly joined in with the dancing.

“I try to adapt to the characteristics of the players,” the 61-year-old said when asked about his moves at a news conference on Monday.

Vinicius Jr lauded Tite’s leadership and ability as a mentor and the impact that both had in his development as a player.

The 22-year-old has become a key part of Brazil’s team that is bidding for a record-extending sixth World Cup title after a brilliant season with Real Madrid.

He scored the Spanish giants’ winner in the Champions League final against Liverpool and finished eighth in the Ballon D’Or ballot last month.

“I always try to evolve, not only here, but at the club where I have more time to work,” said Vinicius.

“(Real Madrid coach Carlo) Ancelotti helps me a lot and he sometimes works together with Tite, they communicate and are very similar in the way they talk and relate to the players.

“In football, even more so at the top level, you don’t have time to complain, you have to evolve, learn.”