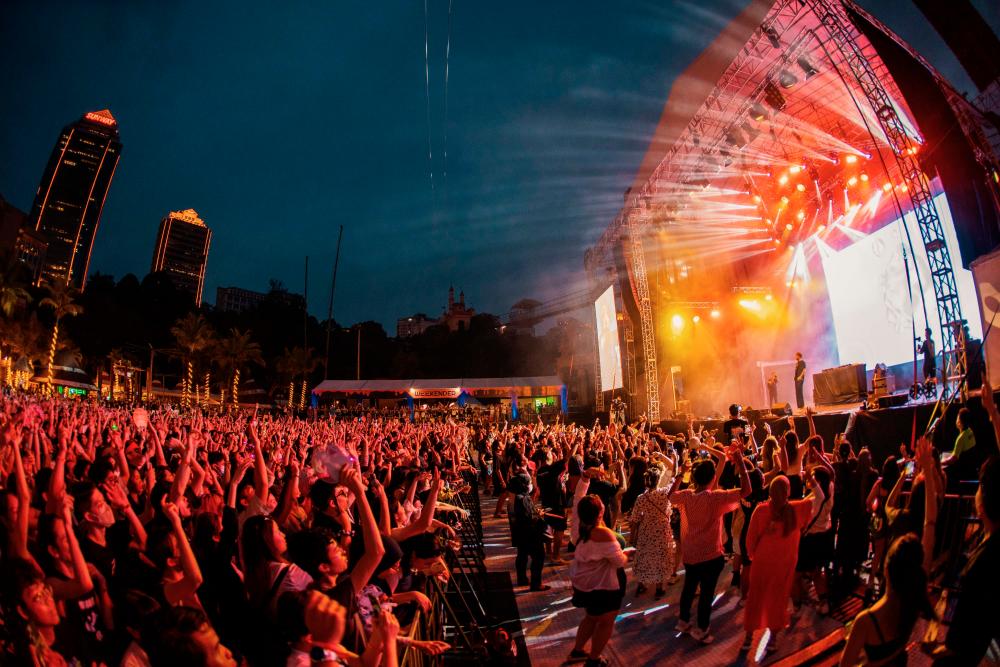 Good Vibes Weekender was a night you wish you could keep rewinding back to. – ALL PIX BY GOOD VIBES WEEKENDER

OVER the weekend, festival-goers flocked to Surf Beach in Sunway Lagoon for the Good Vibes Weekender (GVW), and it was undoubtedly an event to cherish!

GVW made its debut as the inaugural festival experience under the Good Vibes brand, and was organised by Future Sound Asia. This year’s festival attracted music fans from all over the world, who came to see both domestic and international artistes play throughout the festival’s entire duration. The over seven-hour concert featured a wide range of musical genres, such as rock, pop, and lo-fi. Joe Flizzow and the K-pop artist CL were the headliners for the performance on Day 1, while the headliners for Day 2 were Pink Sweat$ and Jackson Wang.

Talented R&B singer and Kuala Lumpur native Alex Ungku opened the first day of performances with hits including Rindu and Summer Lover. Singer Claudia then dominated the stage with her classics. Next up was, Midnight Fusic. They sang their hit song Lovesick, which got the crowd singing along with them. The live performances of the artistes on stage captivated me with their melodious moments. Local pop group Dolla was the following act, and with their upbeat performance, they unquestionably ignited the audience.

Later in the day, a surge in audience enthusiasm came when Surf Mesa, followed by Snake Hips, got the crowd amped with their dynamic DJ talents. The lovely pair Oh Wonder then sang songs like F*** it, I Love You and Hallelujah. There’s no doubt that the audience had a great time throughout the performance by the English duo, and the female singer even interacted with fans by speaking in Malay.

By this time, it was already too difficult to move around since the two biggest acts were about to perform. Malaysian rappers SonaOne and Joe Flizzow captivated the audience with their live performances before the duo performed two songs.

CL then came onstage as the night’s last performer, to loud cheers from the crowd. Her performance was amazing!! Her energy remained consistent throughout, and she sang all of her hit songs, including Hello B*****s. The crowd was chanting along, making the entire experience feel quite communal. And because her songs were generally upbeat, I felt as though everything passed by in a flash, a true adrenaline rush.

On the second day of GVW, Liesl-Mae started things off slowly, but she kept the crowd engaged by performing Billie Ellish’s Happier Than Ever. The Peachskins took the stage next, without any doubt, they did justice to the 30 minutes given to them. Despite being the opening act, their songs were well received by the audience.

Moving on to the next act, Late Night Frequency got us going with their track Fun Lust Love. R&B musician Leaism served us well with her songs, and the crowd yelled at the top of their voices for an encore performance, which she fulfilled with one final song.

NYK, a Malaysian alt-pop performer, was another revelation for me. He wowed the crowd with his songs and utterly stole the night with his heartfelt I’m Fine, all the while enthralling fans with his stylish moves. When he initially began singing, the majority of the crowd was at the back, relaxing, but in time, everyone moved to the front and began to vibe along with his songs.

After NYK, Yonnyboii took to the stage, and the 24-year-old singer sang his well-known singles Sakit and Kecewa. He received the highest applause and provided fans with a moment to remember.

When it comes to music, we have known for a while that Pink Sweat$ does quality music, but I didn’t anticipate him to be this amazing. That night, the singer was on fire, delivering a stunning show that put a smile on everyone’s face. He certainly understands how to control a crowd. When he performed his renowned At My Worst, he had everyone singing and dancing along with him. Local rapper Noor Ayu Fatini, also known as Bunga, made a surprise appearance and performed along with Pink Sweat$’ I Feel Good. Other fun moments, such as the drum competition Pink Sweat$ and his drummer had, as well as their joint beatboxing session, made it a night to remember.

Jackson Wang, the other highlight of Day 2, was really remarkable. The crowd was especially passionate as it was the final performance of the festival. In order to obtain a better view of the stage, everyone was shoving to get closer. He had the audience cheering throughout his performance. Jackson began with his iconic hit 100 Ways, and then moved on to songs from his new album, MAGIC MAN.

Even though the entire performance felt short, I loved every minute of it. It’s a dream come true to be able to see him perform live. Just as everyone assumed the concert was over and began to leave, Jackson returned to the stage and asked fans to select a restaurant for him to eat, and everyone screamed: “Mamak!”

He later tweeted to thank the fans and said he would visit one the next day.

Aside from the music, what caught my attention were the OOTDs of both the audience and the artistes. Malaysia has come a long way since the first arts and music festivals were introduced to the country. People are starting to dress more expressively as time goes on, and Malaysians at GVW had some incredible fashion sense.

Overall, I am confident that all of the performing artistes at this year’s event gave their utmost to please the audience. I had a wonderful time, and it was an incredible experience.