Two vegan bakers dispel the myth about vegan cakes and bakes, while sharing the secrets of the ingredients they use 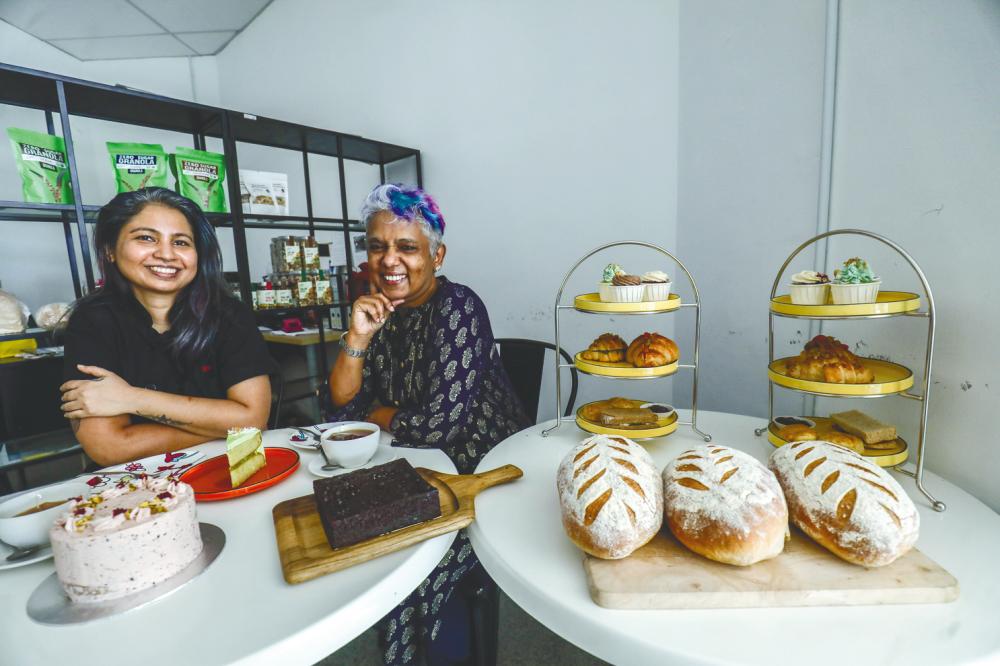 Sita Lakshmi and Sheila Philip with their cakes, bread and pastry creations from Vickedgood.

THERE is a myth that vegan cakes, bread or pastries taste terrible and bland. Besides the taste issue, vegan cakes are said to look boring and unappealing.

Perhaps this perception based on the fact that aside from meat, vegans do not consume eggs, dairy and honey, which are the core ingredients in baking cakes.

In addition, this means vegan cakes cannot use buttercream or royal icing decorations, as the ingredients utilise butter and egg whites, which also come from animals.

Born and raised as vegetarian for religious reasons, Sita came to understand the cruelty against animals in the meat and egg industry due to mass production, and embraced a vegan lifestyle two years ago.

Since then, she has been whipping up vegan cakes that are just as tasty – or perhaps, are tastier than – ‘normal’ cakes, and which look simple but elegant.

Sita got together with another talented baker turned cafe owner, Sheila Philip, and set up Vickedgood, a vegan bakery and food facility at Metropolitan Square in Damansara Perdana in March 2021, during the lockdown.

“We want to change the myth that vegan cakes don’t taste nice and look unattractive. That is the myth we are busting. We would like to change the public perception about vegan cakes,” said Sita Lakshmi, who aims to create cakes that are enjoyed by not just vegans but non-vegans, as well.

“Vegan cakes come in a low form (flat cakes) and have a rectangular shape like bread. We want to make cakes [that look] like any other cakes,” said Sita.

Unlike most vegan bakers, they make their own products, including buttercream which is used in designing cakes, and this is the secret behind their visually-beautiful cakes.

“Generally, vegan cakes are much heavier and don’t taste like cakes. Probably, it tastes more like brownies or pudding, but we make our core ingredients like yogurt and Aquafaba (water derived from boiling legumes, reduced and whipped until it looks like whipped cream). Thus, we are able to make cakes much lighter and our own buttercream makes the cake look just any other regular cake,” said Sita.

“Our vegan cakes are beautiful because we use our own buttercream. We ‘dress’ our cakes to make them suitable for birthdays or weddings,” she added.

Their mission is to go beyond the vegan community and to reach out and win over hearts with aesthetically-beautiful and incredible-tasting vegan cakes. They want anybody who takes a bite of their creations to feel that they are eating “a good cake”, and not just a good ‘vegan’ cake.

Among their bestsellers are the rich Belgian Chocolate, Berry Rose Pistachio and Pandan Gula Melaka cakes, but aside from that, their other creations like Sourdough Rustic Country Rye, no-flour Keto bread and cookies are also favourites among their customers.

Their vegan scones and croissants, which are hard to find (in vegan version), are also a must-try. The scones, made using coconut milk for their upcoming High-Tea Set (to be launched in June), tastes delicious and melts in the mouth.

When comes to cake design, Sita gets inspired by cakes made by celebrity bakers and authors like Christina Tosi and Nancy Silverton. However, she strikes a balance between her own creativity while meeting customers’ requests, and cake design trends in the market.

In terms of flavours, it’s about going back to her own childhood.

“Basically, it’s all about knowing yourself, where you come from. For instance, I go back to my childhood to find inspiration for ingredients like the Gula Melaka, which is a local product. If we can make cakes using locally sourced ingredients, then, we are helping the environment,” said Sita.

“That is what veganism is all about, caring for the environment as much as possible. We make our own raw products, like vegan yoghurt,” she said.

Their coconut yogurt taste almost like cow’s milk-based yogurt. It has plant-based protein, which is easy to use for cooking, baking and its a good replacement for those with milk allergic.

They were forced to do research and come up with their own yogurt because the vegan yogurt available in the market was not working well for their required taste profile.

“Most vegan yogurts were commercially made with soy-based yogurts, so the texture was all wrong and the cakes were failing. When we came up with our own santan (coconut milk) based yogurt, the texture was perfect for our cakes,” said Sheila.

Apart from using it in their cakes, they also supply the product to boutique grocery stores.

“We use our own yogurt, pandan kaya and buttercream for all of our cakes. We substitute egg white with Aquafaba,” revealed Sita.

No eggs, milk and honey

Substituting eggs and milk is not easy. It may involve using more than one ingredient and various techniques to get the perfect taste.

Substitutions for eggs are a lot more complicated and involve many techniques to replace because the yellow part is more rich and used as an emulsifier because it binds the ingredients together, while the white part “adds a lot of airiness and has more protein,” according to Sita.

“For the white part, we would use Aquafaba and sometimes we mix vinegar or baking soda to create the airiness in the cake.”

For milk, however, they use variations of plant-based milks such as coconut milk, almond milk and soy milk instead of the usual cow’s milk.

“Different types of milk have distinctive flavours that may come through in different cakes. It also depends on the types of cakes we are baking and which plant-based milk that we can use to substitute. For instance, chocolate cakes go very well with coconut milk, because the flavours are complementary and coconut enchances the chocolate flavours in the cake,” said Sheila.

“This is why vegan baking is more technical because it involves more than one substitution. We spent two years to do research and testing the taste, and finding out which milk is suitable and matches with flavour profiles, and try to find the best combination.”

It may be difficult to replace eggs, but its easy to replace honey with maple syrup or gula Melaka.

‘Brains’ behind the cakes

Both Sita and Sheila were previous owners of a bakery. Sheila is the founder For Goodness Cakes in Bangsar, while Sita operated two cafes – Barrack Cafe and The Mossi Forest Cafe – in Cameron Highlands, which have since been sold off.

Sheila has been in the IT industry for 24 years and has underwent a baking course at Academy of Pastry Arts, while Sita, a mental health counselor, learned baking from Pastry Institute of St. Honore six years ago and met Sheila through a mutual friends, 10 years ago.

The two came up with a ‘pandemic proof’ business plan as both their businesses suffered as a result of dine-ins not being allowed due to the MCO.

Thus, when they opened their vegan bake business amidst the Covid-19 pandemic in March 2021, they decided to focus more on accepting orders, online delivery and supplying ingredients, instead of depending only on walk-in customers.

Vickedgood is a sort of a one-stop-centre as it sells items which can go well together like breads, butter or jam, and yogurt with granola. The name Vickedgood came from a Canadian phrase, which is used to mean “amazing”, and it is spelt as “Wicked Good” with a V to highlight the fact that it’s vegan. 1.Peng Soon to put on aggresive stance in Malaysia Masters