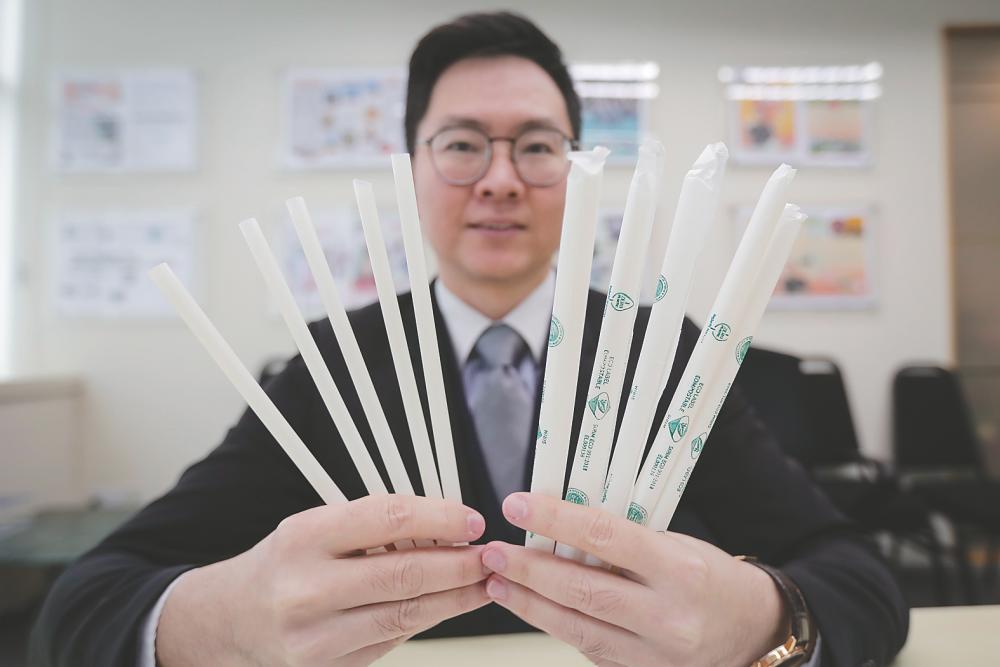 Currently, Malaysians are spoilt for choice when it comes to eco-friendly straws. Varieties of straws made from paper, bamboo, metal, glass, and silicone, to name a few, are available for use. But the list does not end there.

There are also edible straws made from rice or tapioca, as well as pasta (which are also becoming popular overseas) and sugarcane straws.

However, another type of straw is raising many eyebrows. It is the Malaysian-made compostable corn starch straw manufactured by PMI Packaging Sdn Bhd in Senai, Johor, which has been in the market since 2016.

PMI’s director Desmond Tan told theSun that it took three years to create their own formulation for the corn starch straws, specifically to strike a balance in the composition of the straw to ensure it does not get too soft or too hard.

Compostable products are plant-based, just like PMI’s corn starch straws. Tan added that the composition of the straw is corn starch, Polylactic Acid (PLA) and other renewable resources generated from the plant. “We are using (a composition of) plant extracts to produce the straw,” said Tan.

“We use plant-based material to make bio-resin to create the straw. Once used or re-used, the straw can be discarded. It can be put into a compostable facility or in a landfill,” he said.

The corn starch straws (which are available from Shopee) come in various sizes, including 6mm, 8mm and 12mm (for ‘Boba’ drinks) and are eco-friendly, chlorine-free, and most importantly, do not get soggy like other materials.

Apart from corn starch, Tan said his company is looking into making straws from oil palm waste (empty fruit pulp), which is still in the research and development stage, and other starches such as tapioca.

On July 1, 2019, the Selangor state government imposed a ban on plastic straws in all eateries. The ban was intended to eliminate single-use plastics, which pollute the ocean and pose a danger to marine life such as turtles.

Six months later, the Federal Territories of Kuala Lumpur, Putrajaya and Labuan banned the use of plastic drinking straws from Jan 1, 2020 for traders and operators of food outlets. The ban is also included in the conditions for business licenses.

“The plastic straw ban is almost a key to opening a Pandora’s box of awareness for all other single-use disposals,” said Carolyn Lau, the co-founder of the volunteer group Sampah, Menyampah, which started the Tak Nak Straw movement on Facebook.

“It is the simplest thing to give up. It is a good way to get people thinking about single-use disposable plastics in general,” said Lau, adding that single-use plastic cutlery and food packing containers are still in use.

According to her, the kindest to the earth are natural bamboo straws.

Lau said: “When thrown out, it is compostable. It is 100% organic, it does not add any pollutants, it is made locally, is re-usable up to one to two years and has a low-carbon footprint.”

Other options include compostable papaya stem straws, where the stems are cut and soaked in saltwater and kept in the refrigerator, or even lemongrass stalks, which are also natural.

“One paper straw is harmless, but if it is coated with plastic, then it is putting plastic back into the environment,” said Lau.

“It is not [really] re-usable, instead it is [best] if only used by people with illnesses, or in medical facilities.”

“We don’t need the straw. We can put the technology into other important matters,” Lau said, adding that single-use plastic straws cannot be seen as an isolated problem, instead it is best to look at their environmental impact on the planet as a whole.

For example, Lau said cutting down trees to make paper, and the process of making paper straws or even manufacturing steel straws result in a bigger carbon footprint.

Hence, Lau opined that cutting out straws altogether is better for the environment.

As for the amount of energy and resources needed for making straws, Lau feels that changing perceptions is better.

Lau explained: “The perception is that using a straw is clean. If the hygiene of the rim of a cup is a concern for a person, (some people do not want to touch the rim of a cup), how can you be sure that the inside of the cup is clean?”