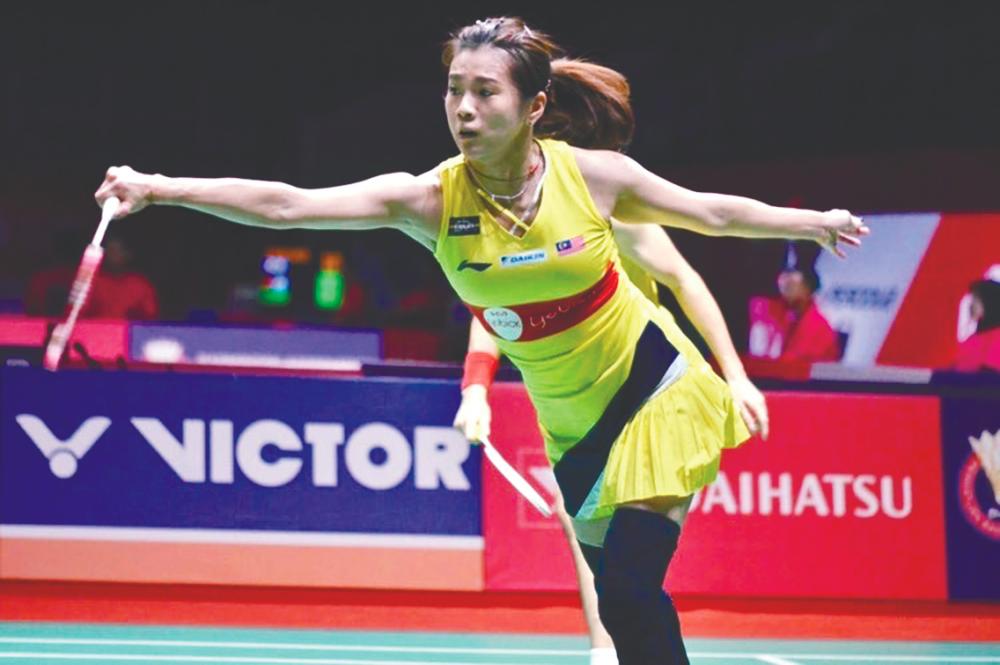 Goh says you should set a goal and not give up. – Courtesy of Goh Liu Ying

THERE was nothing glamorous about the competitive world of badminton until Goh Liu Ying came along.

This mixed doubles player (with partner Chan Peng Soon) have been consistently ranked among the top 10 mixed doubles badminton pair in the world, and at the 2016 Summer Olympics in Rio, they brought back the silver medal.

On top of being a great badminton player, Malacca-born Goh is also known for the glamorous touch she brings to the game. The part-time model is recognised for eye-catching outfits that add a dash of colour on the courts.

Goh started training for badminton when she was 10, and at age 13 was enrolled in the Bukit Jalil Sports School.

In 2012, she and her partner became the first Malaysian mixed doubles pair to reach the semi-finals of the All England Open. With Chan, she got the first ever Malaysia Open crown by beating Indonesian pair, Irfan Fadhilah and Weni Anggraini.

In March 2017, Goh and Chan become the first Malaysian mixed doubles pair to reach the All England Open final since 1955.

In December 2018, Goh and Chan resigned from the Badminton Association of Malaysia.

She and Chan have already qualified for the 2020 Olympics (which has been postponed to 2021), and recently opened her own online lifestyle store, GLY.

Goh had planned to open her online store in 2019 but did not have the time then.

“During the MCO (movement control order), I noticed that many people were conducting business online. Some of my teammates were doing the same. So I thought, why not start my own lifestyle store. I spoke to my investors and they were interested.”

Goh says she has her own IT company and her brother is a software engineer. Together, they came up with GLY.

“During the MCO, we could not do any training. I already had an idea to open my own business and decided to work on it during the MCO.”

She did not get to practise badminton for almost three months before she was allowed to resume training.

“I trained every day at home and did tabata. Since we could not go to the court, I did some skipping and exercise for the shoulders and legs. I did a different routine every day.”

She also interacted with fans online, who followed her as she went through her exercise routines.

Female athletes, other than tennis and golf stars, are seldom considered style icons due to the kind of outfits they wore.

Goh changed the rules for badminton by wearing stunning outfits that combine both practicality and fashion.

“I saw how tennis players dressed fashionably on court. Some even wore dangling earrings. I wondered why no one dressed like this during badminton competitions. “

She says there are requirements as to how female players dress.

“I think we should learn from tennis. They look good and have a wider audience, and maybe we can attract more sponsors. I prefer wearing a dress on court because it is more comfortable.”

Her main sponsor consults her on her favourite colour and they make custom-made dresses for her.

As a part-time model, she has showed off how photogenic she is on several occasions.

“Before I go out, I always check the mirror to see if I look good. It boosts my confidence. Before I stride onto the badminton court, I must feel confident. Maybe 10% or 20% of it comes from the way I dress.”

Will she design sportswear after hanging up her racket?

“Maybe as a hobby. Right now, I have my IT business and I want to concentrate on that. But I will design sportswear, if given a chance.”

“I see myself as a businesswoman, an entrepreneur. That is where I am headed.”

Playing in as many tournaments locally and abroad is the best way to prepare any athlete for major competitions such as the Olympics.

Goh says, due to the many cancelled competitions, they have not achieved any of their targets this year and need to set new ones next year.

She and Chan are, therefore, taking things one step at a time.

Her advice to fans, “Set a goal and don’t give up.”