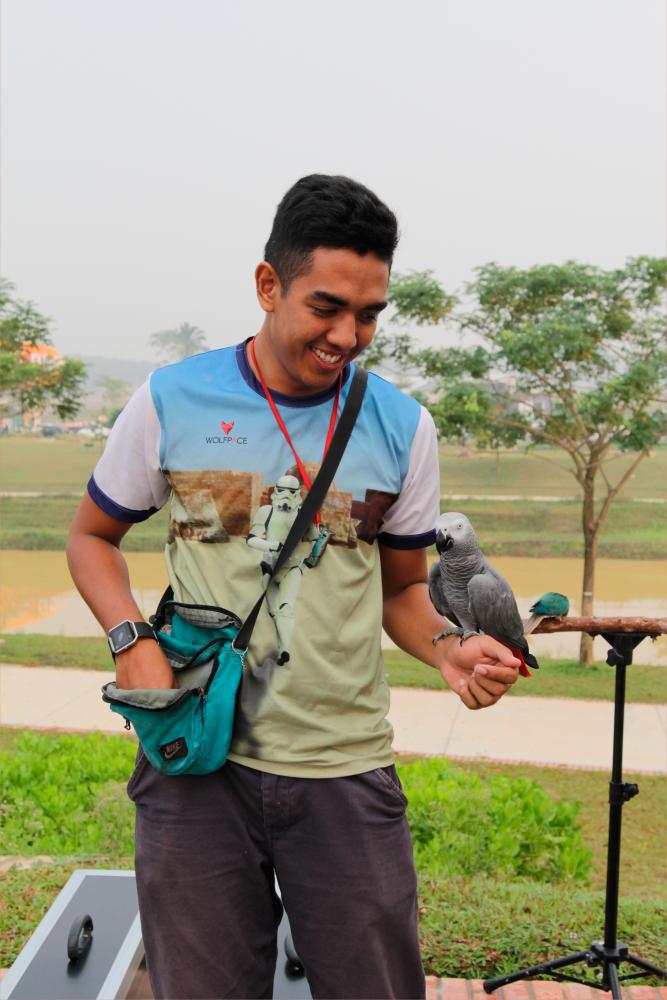 Syimir is a sort of ‘parrot whisperer’. - Picture by Alang Ariff Adib

FOR almost ten years, Syimir Safawi has seen his love for birds evolve from that of a somewhat casual birdkeeper into that of an ardent parrot trainer.

“I’ve loved birds since I was in primary school,” said Syimir, who went a step further after a trip to a pet shop.

“A very tame, small parrot came to me in a pet shop. I bought it and my love for parrots began,” he said.

The parrot was a Peach-faced Lovebird. Although it is commonly believed that Lovebirds should come in pairs, Syimir only bought one.

It was during his internship and he did not have enough pocket money.

The 30-year-old today has gone through a variety of pets, from cats to hedgehogs and even sugar gliders, yet his heart remains firmly attached to parrots.

“I am allergic to cats. My skin has an allergic reaction to them.”

It was one of the reasons that gravitated him towards birds, which he has no problems with.

According to Syimir, birds or more specifically parrots, are also low maintenance pets.

“Food is easy to get, and their waste is not as strong smelling as other animals. They’re more hygienic”.

He also credits the intelligence of parrots as a major draw.

“All the birds that I keep, even though they are the same species, have different personalities. Research has shown that parrots are also the most intelligent birds, and they have the mind of a five year old human child,” he said.

Think of the parrots

Although he currently works for an event company, on the side, Syimir is involved with the training of parrots in “free flying” under his Parrot Recall Project.

For those in the parrot ownership community, free flying refers to the act of temporarily releasing parrots into an area to fly with relative freedom, before returning to their owners either upon command or through their own free will.

It was in 2018 that Syimir embarked on the tricky but rewarding journey in training his parrots to free fly.

“Back then, I bought my first African grey parrot, which is a medium-sized parrot considered the most intelligent among the parrot species. It is able to mimic words we use and easily follow human vocabulary,” Syimir said.

Due to the parrot’s intelligence, African greys are also the most difficult birds to train in free flying. Essentially, these birds are very prone to flying away and never returning.

“So I tested myself by taking the challenge and bought one. From there, I began training and researching for four months before it was applied to the parrot so that it could free fly. I managed to control him for about three years”.

“I think it accidentally ate or drank something, and after it came back from free flying, it died a few days later.”

Instead of getting a replacement, Syimir realised it would be better to start a training or consultation centre for parrot training and behaviour control for people in the community.

“Then, the Parrot Recall Project began, with me training other people’s parrots while also providing consultation.”

Birds are meant to fly free. It’s a simple concept or belief, but it gets tricky for those who own parrots. Due to spending thousands in order to buy their parrots, most owners keep the birds caged or indoors without free flying.

“People tend to keep their birds in the house, keep them caged or worse, they perform wing clipping on their birds so that the birds don’t fly away,” said Syimir, who is also an administrator for the Free Fly Parrot Malaysia Community on Facebook.

Wing clipping is exactly what it sounds like, wings of birds are clipped so that flying is not possible.

“For me, I don’t blame them because they don’t have enough exposure to free flying,” he continued.

As Syimir puts it, he feels a responsibility to educate and spread awareness that parrots are smart enough to both fly free recreationally and also return to their owners.

“There is a way to engage the bird, teaching it how to get commands right, and develop skills. You never know, if there is an incident where the bird flies out of the window, you will need to know how to retrieve it,” he said.

“All birds can free fly, but not all owners know how to control their free flying bird.”

3.PM: MoF, Cabinet will have opportunity to improve Budget 2023

5.NanoMalaysia introduces Bicep to promote use of biomass for sustainable agriculture