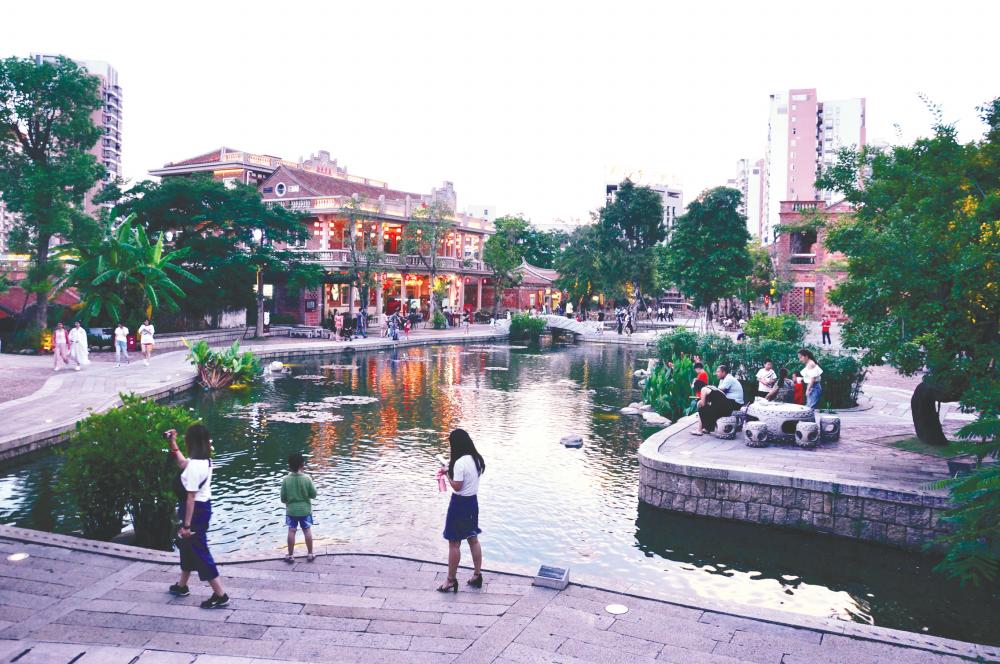 The Wudianshi cultural block in the Jinjiang suburb. - CINDI LOO/THESUN

THE CITY of Quanzhou is one of China’s more famous historical and cultural cities. Located in southeast Fujian province, this economic and political centre with Taiwan to the east is also an important seaport.

Venture into Quanzhou and you will find a rich history and cultural diversity due to its historical position as one of China’s major trading ports for more than three centuries.

Traders from Arabia, India and Europe had made Quanzhou their starting point along the Silk Road trade route.

Visitors to Quanzhou do not have far to go to see evidence of the city’s traditional way of life. Just head to Xunpu Fishing and Cultural Village, located at the estuary of the Jinjiang River about 10km southeast of Quanzhou.

There, the womenfolk all don flowery headgear that denotes their marital or single status, with special headgear for ceremonial purposes.

Some of the houses in the village have walls made out of large oyster shells, which are said to have come from Africa. The story goes that in ancient times, these shells were used as a counterweight for merchant ships plying between the city and Africa to keep them steady through stormy weather.

The core industry for the men in the village remains oyster harvesting and fishing, while the womenfolk handle the actual selling of the day’s catch. At the village centre is a Mazu temple, dedicated to the goddess of the sea.

For history buffs, the Quanzhou Maritime Museum in the city centre is a quick primer on the important role of the maritime trade in Quanzhou.

Helpful guides at the museum will explain the history and interesting facts about the city such as how Quanzhou was once called Zaiton (City of Olives) by ancient Arab traders, that the city was once known for its technologically-advanced boats and that it was visited by Muslim scholar and explorer Ibn Battuta as well as Italian merchant, explorer and writer Marco Polo, who was said to have compared Quanzhou to ancient Egypt’s port city of Alexandria.

Northwest of Quanzhou Maritime Museum is the China Museum of Fujian-Taiwan Kinship, built to commemorate the friendship between Taiwan and Fujian province.

The museum showcases some of the shared artefacts and collaborative efforts between Taiwan and Fujian, including when they joined forces to defeat the Dutch colonialists.

Don’t miss the painting of a magnificent tree by Quanzhou-born Chinese artist Cai Guo-Qiang, who famously uses gunpowder in his artworks. Cai was also director of visual and special effects for the 2008 Beijing Olympic Games.

A popular tourist area in Quanzhou is the Wudianshi, a traditional and cultural block located in the city suburb of Jinjiang.

There, visitors will find heritage buildings, some of which have been converted into shops selling trinkets, souvenirs and traditional food while still maintaining the building’s outer historical facade.

Wudianshi is one place that best highlights the city folk’s appreciation of arts and culture. There is even an art gallery that proudly displays works by the children of Quanzhou which are for sale.

Interspersed among these heritage buildings are modern hip coffee cafes, bubble tea shops and restaurants selling Quanzhou delicacies such as its spring rolls, oyster omelette, a variety of seafood as well as a jelly made from sandworms!

The city was also recognised by Unesco as a World Museum of Religions. But this is a story for another day.

The writer’s media familiarisation trip to Quanzhou was at the invitation of AirAsia and sponsored by the Quanzhou Tourism Board. AirAsia flies to Quanzhou from Kuala Lumpur daily.