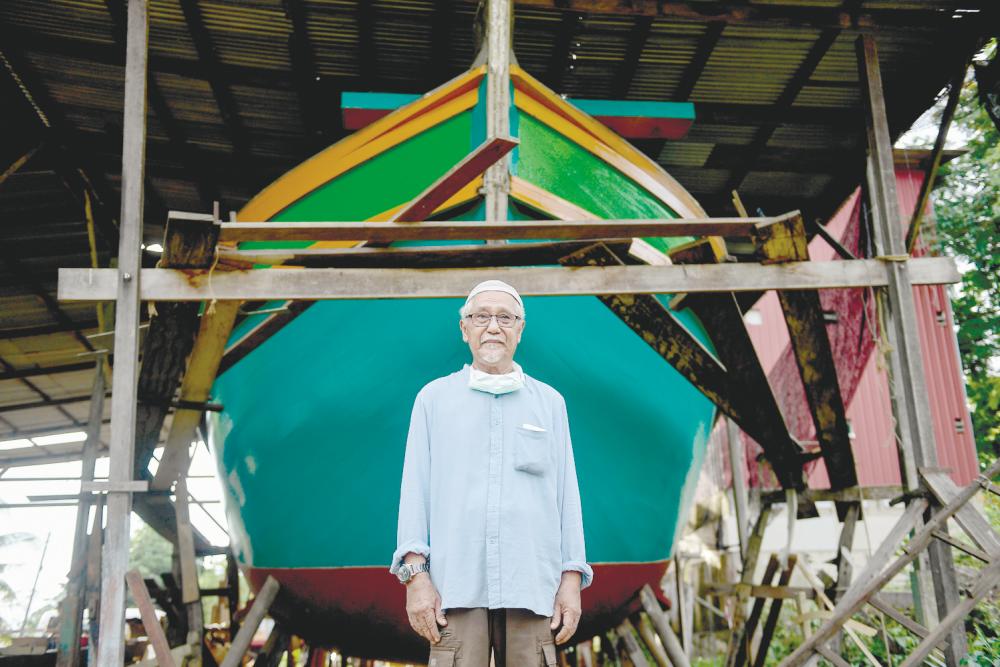 Shafie is among the three remaining boatmakers in Pulau Duyong. – Bernamapix

Who could have guessed that the tiny Pulau Duyong housed a thriving traditional wooden boat and yacht building industry several decades ago?

The 2.7 square kilometre island, located on the estuary of Sungai Terengganu in Terengganu, has a rich heritage in boatbuilding and has even found a place on the world tourism map as Pulau Duyong is the venue for the Monsoon Cup, an international yachting event launched in 2005, which attracts tourists in droves to Terengganu.

The local villagers are proud of Pulau Duyong’s world-class boatbuilding industry which at one time drew the attention of boat and yacht enthusiasts from all over the world, thanks to the skills of its artisans who used neither blueprints nor nails to make the handcrafted wooden boats.

During the 1970s and 1980s, Pulau Duyong was always a hive of activity as there were as many as 20 to 30 boatyards on the island. Today the number has dwindled to three due to the lack of orders and shortage of skilled craftsmen.

Known as Pok Awi among the locals, Shafie, 71, said during the 1970s and 80s, they used to get a lot of orders for boats and yachts within the country and from abroad.

“We used to be so busy then ... but now we are only left with memories as orders have decreased in recent years,” said Shafie, who has been building boats for the last 46 years. He was speaking to Bernama when met at his boatyard on Pulau Buyong during a recent media visit to

Terengganu organised by the Department of National Heritage.

During the local boatmaking industry’s heyday, he recalled, they used to get orders for boats from the United States, England, Italy, France, Denmark, Australia, New Zealand, Algeria, Canada and Singapore.

Shafie and his fellow boatmakers prided themselves on the quality of their workmanship as their sturdy handmade wooden vessels were capable of sailing on the rough seas to as far as Madagascar, South Africa, Australia, the United Kingdom and the United States. Not only that, the boats they made could last several decades as well.

According to Shafie, the steep hike in raw material prices over the years has forced several boatmakers to leave the business.

Shafie, who is currently busy putting the final touches to a 54-metre long and 17-m wide yacht that was ordered a year ago, said he usually does all the construction work himself but sometimes his son extends a helping hand.

“Usually it takes me about one to one-and-a-half years to complete a boat of this size until it is able to
sail smoothly,” the father-of-eight said.

He uses screws and wooden pegs for the construction process, stressing that this method guarantees the vessels’ durability and also renders them less likely to spring a leak when on the sea.

Learning from the artisans

Two state government agencies – Pusat Giat Mara Terengganu and Central Terengganu Development Authority – are making an effort to safeguard and preserve Pulau Duyong’s boatmaking tradition by sending students there to learn from the artisans themselves.

“We are willing to guide the younger generation until they have mastered the (boatmaking) skills. It will be a real pity if this industry is not preserved and disappears altogether,” he added.

His boatyard is also visited by local and foreign tourists throughout the year who get to see the traditional boatmaking process up close.

Visitors to Shafie’s boatyard will not miss an old wooden building located nearby. Known as the Duyong Old Fort, it is a reconstructed old palace featuring unique Egyptian Islamic elements.

Built in 1919, the building had also served as a religious education centre in the past.

According to Terengganu State Museum assistant curator Munirah Embong, the original building was built by a judge named Datuk Biji Sura, who was better known as Tok Syeikh Duyong.

“The craftsmen who were assigned to build the fort comprised Malays and Chinese from Singapore who built it using bricks and egg white, which was used as a replacement for cement, mixed with sand, honey, small stones and clay.

“It has nine adjoining roofs, with the kitchen, bathroom, verandah and a bridge interconnected. The concrete fence and posts reflect Egyptian architectural elements,” she said, adding that the building currently serves as an exhibition gallery under the auspices of the Terengganu State Museum. – Bernama