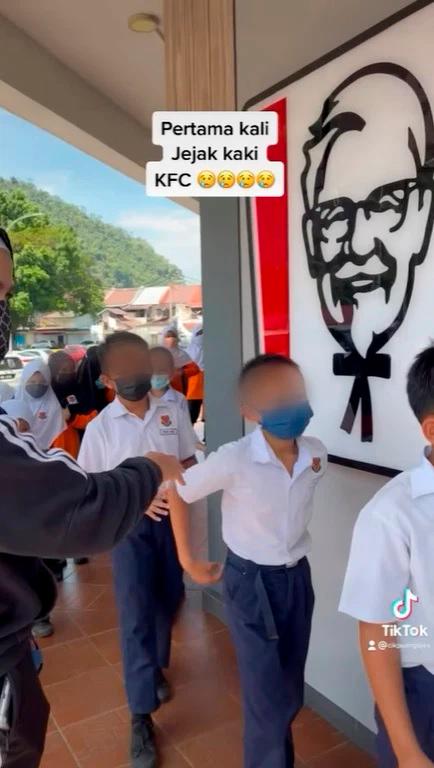 The group of students lining up to enter the KFC outlet. – Facebook Cik Puan Gojes

WHILE most of us are privileged enough to consume fast food daily, others have to go through great lengths to satisfy their cravings, or can only watch from afar.

Recently a one-minute TikTok video went viral for the right reasons. A primary school teacher named Ismaniza Fahida Ismail, posting under the account @cikpuangojes, brought over 30 of her students to enjoy a meal at one of Malaysia’s top fast-food restaurants, KFC.

“FIRST TIME STEPPING FOOT IN KFC. Many people mentioned that we could’ve just bought the food and eaten it in school. Something that is often seen as petty and simple for certain people actually gives hope to others,” the caption read.

According to Fahida, initially the fast-food restaurant did not allow them to dine in as their group was too large. However, she fought for her students as they wanted to experience eating in KFC.

The English, Physical Education and Music teacher told mStar that the reason behind her act was to encourage her students to learn and have full attendance at school, as well as complete all of their school work.

“They seemed to be uninterested so I promised that whoever completes their school work, I’ll treat them [to KFC], and coincidentally all of them did it,” she said.

She further mentioned: “So I asked them what they wanted to eat and 90% of them answered KFC.”

Fahida later discovered that 98% of her students have never eaten or been to a KFC outlet.