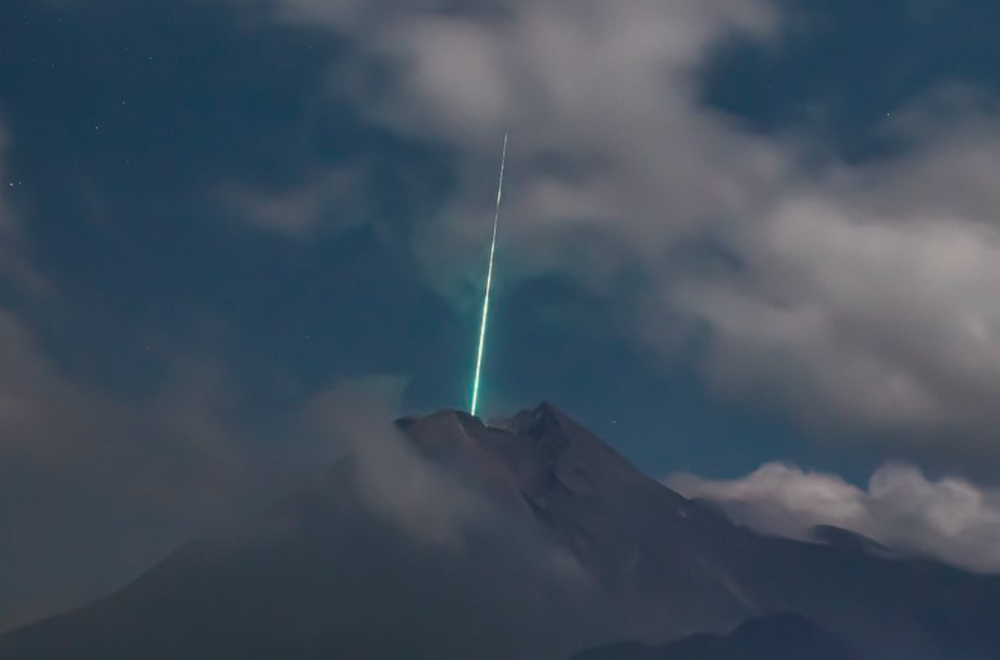 On May 28, 2021, Indonesian photographer Gunarto Song was ready to capture the night views of Indonesia’s most active volcano, Mount Merapi, from the Batu Alien (Alien Rock) site, which is an area nearby the volcano where a giant rock had landed after it shot off the top of the volcano during an eruption.

While adjusting his camera equipment, he caught sight of a streak approaching the volcano’s peak quickly and immediately captured the sight before him.

What resulted was an amazing and strange green streak of light above the peak of Mount Merapi. To be honest, it looked like a James Bond villain had shot a laser from the evil lair.

Song posted the images on his Instagram and the pictures definitely piqued a lot of interest from netizens.

According to the National Institute of Aeronautics and Space (LAPAN), the green streak of light coincided with two meteor showers happening between the months of May and June 2021.

The Eta Aquarids shower occurred between April 19 to May 28 while the Arietids shower is supposed to last from May 14 to June 24.

Based on these data, LAPAN speculates that the streak of green light above Mount Merapi may have been tied to these meteor showers.

“Meteor showers are caused by meteors falling towards the Earth’s surface in large amounts, hence the term ‘meteor shower’.”

“These short-lived meteor showers occur when meteoroids (small rocks that orbit the Earth) enter the planet’s atmosphere at high speeds,” said LAPAN in an article on their website.

When meteoroids enter the Earth’s atmosphere, the friction heats up the gasses around them and give off bright and colourful tails. Meteoroids with their hot glowing tails are called meteors or shooting stars.

The colours of the tails depend on their chemical compositions. LAPAN explained that the green hue in the image was possibly due to high amounts of magnesium in the meteoroid.

In an interview with CNN Indonesia, Song explained that he managed to capture the fast moving object via a long-exposure technique. This means his camera shutter was set to remain open for a longer amount of time than usual.

“I set the shutter speed at four seconds. This ensured that the photos (of the light) would appear long. But the light was round-shaped, it was so fast but it was indeed a round light that fell,“ he said.

He was focusing on some clouds that had suddenly appeared at the volcano’s peak when he saw the round ball of light. Seeing that meteor showers go by quickly, he’s lucky to be able to witness the phenomenon and capture the moment for posterity.

Hamilton can add 20 more wins to his record 100, says Brawn