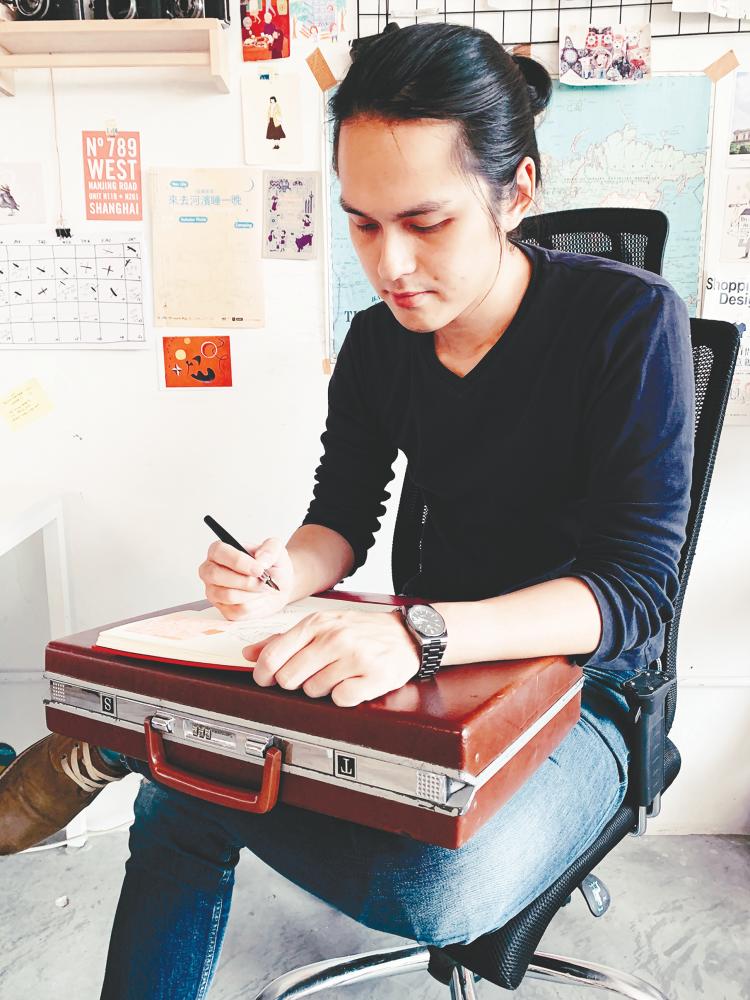 Lai drawing on top of a briefcase. – Courtesy of Lai Theng Sen

AT just 28 years old, Lai Theng Seng has not only opened his own studio called Studio Behind 90, but has already worked for some big names such as Air Asia, Perodua and Cadbury, just to name a few. An illustrator by profession, he is better known by another name: Book of Lai.

Lai’s style of art is playful, and features a distinctive colour pallet. His works have also been featured in galleries around the world, most recently at the Taiwan Poster Invitation Exhibition 2020.

What does being an illustrator mean to you?

“To me, being an illustrator is like having a superpower, in this case, the special ability to create anything out of imagination.

“When I create, I like to start from random ideas; for example, a scene, or a story. But more often than not, it comes from my pursuit of freedom.”

How did you become an illustrator?

“Before I became an illustrator and opened Studio Behind 90, I studied and became a multimedia designer. I was someone who would do website design, animation, and app UI design. At the same time, I was really into videography as well.”

Your style is distinct, where do you get your inspiration from?

“Funny you should ask, because it was only recently that I realised that my painting style is influenced by my childhood, based upon the comics and cartoons that I watched.

“If I had to pick the one piece of media that had the most significant influence in the work I do today, it would be Samurai Jack. It was an American action-adventure animated television series created by Genndy Tartakovsky for Cartoon Network.

“I also take inspiration from the vibrancy of Malaysia’s multicultural identity, how we are all different from each other, while at the same time able to coexist in harmony.”

What are your favourite subjects to draw?

“I enjoy painting vehicles, and I imagine how each car is a tiny living space. But, I also realised that my taste in subjects changes as I grow older.

“Previously, I found that my art seeks to express the freedom of life, and to convey the urge to live sustainably.

“Nowadays, I illustrate the first thing, anything that comes to mind. As I understand the need to balance between creating and making a living, I worked on the ability to create art without having to worry about likes and favourites.

I see on your Instagram (@BookOfLai) that you’ve done a lot more animation recently. How do you do it, and what made you do it?

“That is a part of a 100 Days Animation Challenge that I’m doing. It is mainly to help me rethink my art creation process and to reshuffle ideas. The hope is that it will help me develop something unique out of my usual creative bubble.

“I animate both digitally and by hand. Hand animation requires frame-by-frame illustration, which means each frame requires a different posture or angle.”

Tell me about Studio Behind 90 and how did it get its name.

“The studio is currently made up of eight people and we were all born in the ‘90s! So we are always excited to visually express our ‘90s point of view.

“As a studio, we aim to help brands explore different perspectives, and give whatever they are doing a fresh take.”

What is your advice to those who are looking to become an illustrator?

“Find a balance between creating awesome art and making a living.”