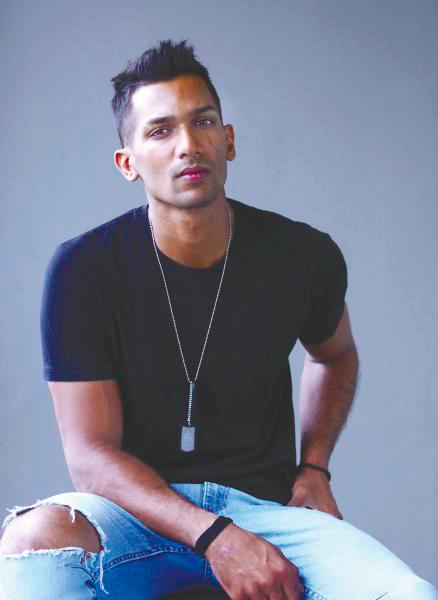 Theebaan Govindasamy is looking to expand his horizons in 2023. –ALL PIX BY THEEBAAN

THE straight scar line running down the left side of Theebaan G's face gives him a 'tough guy' impression. Plus, with his tall, and muscular figure, one could be forgiven for feeling a bit intimidated by him.

However, as you get to know him more, you will find out that he got the scar as a two-year-old following a bicycle accident, and that he is actually a super chill and down-to-earth person with a great sense of humour. And he likes the color pink, too!

Theebaan Govindasamy, 32, is no stranger shattering misconceptions, thanks to his experiences in the world of martial arts and acting. His martial arts experience began at the age of five, and he represented Malaysia in karate for seven years and was crowned National Karate Champion eight times, before becoming Malaysia's Welterweight Champion in 2016 in the local mixed martial arts (MMA) scene.

During his interview with the Sun, Theebaan explained he began karate lessons at an early age, and his parents encouraged him and his three siblings to participate in fighting and training classes as well.

He said: “I became national champion for the first time in 2006, at age 16, and got induced into the national team the following year. In 2014 I left national team and [decided to try] a different kind of fighting experience.

“Shangkaraa, my brother, was heavily involved in the MMA world, and I picked this up along the road. I started training in Klinch MMA in Publika from there, and the rest, as they say, is history.”

Theebaan later tried his hand at acting again, starring in the 2018 action film PASKAL: The Movie . He was called for casting after filmmakers saw his performance by him in Victory , a local Tamil-language action film which was released in 2014.

“Many didn't know before acting in PASKAL , I first entered the Tamil entertainment industry by acting in that movie. I played the lead role of a karate athlete, but the film was not successful, and many people do not even know it exists,” he explained.

“[In PASKAL ] I was asked to audition for the role of Misi (a PASKAL member), and initially, I didn't want to do it,” he said. Fortunately, he eventually said yes. The film went on to earn RM30.5 million during its initial theatrical run.

Theebaan said that the most challenging scene for him to film was one part of the montage sequence which demonstrated the real life PASKAL training process, which took place underwater.

“My hands and legs were tied up and we had to jump into the water and swim. In the scene, there was an underwater camera capturing the cast holding their breath, sinking to the bottom of the pool at the same time.”

After PASKAL , he went on to star in other Malay films, including Ada Hantu and Ada Hantu 2 , and the romantic comedy Pasal Kau .

He will next be seen in the 22-episode Tamil series Veera , where he plays the titular lead character, and also acts as a stunt coordinator.

This series is about a talented martial artist trained by a former boxing champion, who has to face his own brother as a rival in an MMA Championship match, which is the perfect character for him.

When asked if he was interested in playing a villain rather than the hero, he replied: “I am ready to take part in movies and dramas as a villain, and I would be grateful for the opportunity.

“I have previously acted as the bad guy but not as the lead, but yes, I am willing to explore new genres or various characters in the future.”

We also asked him about his upcoming action film Malbatt: Misi Bakara , which focuses on a real-life 1993 incident where 19 members of the Malbatt 1 unit join in a mission to rescue a group of US Rangers during a skirmish in Somalia.

He said: “A huge crew was involved, so we flew to Turkey in batches; some of us never even met throughout the entirety of the shoot. It was a crazy experience, flying halfway across the globe to shoot a movie.

“Most of all though, telling what actually happened in Bakara was always the heart of the project.”

What is his advice to those interested in martial arts or acting? “Love what you're into,” he said. “Never give up after a single setback. Use it to drive your motivation rather than hold you back. Also, always be willing to learn from your experience.”

Watch Veera’s Final Episode on Astro Vinmeen (CH 202) and Astro Go available every Monday to Thursday at 9pm and Catch his new series, Special Force: Anarchy on Disney Plus.