Wildlife stories through a modern lens

Bertie Gregory is at the forefront of natural world filmmaking 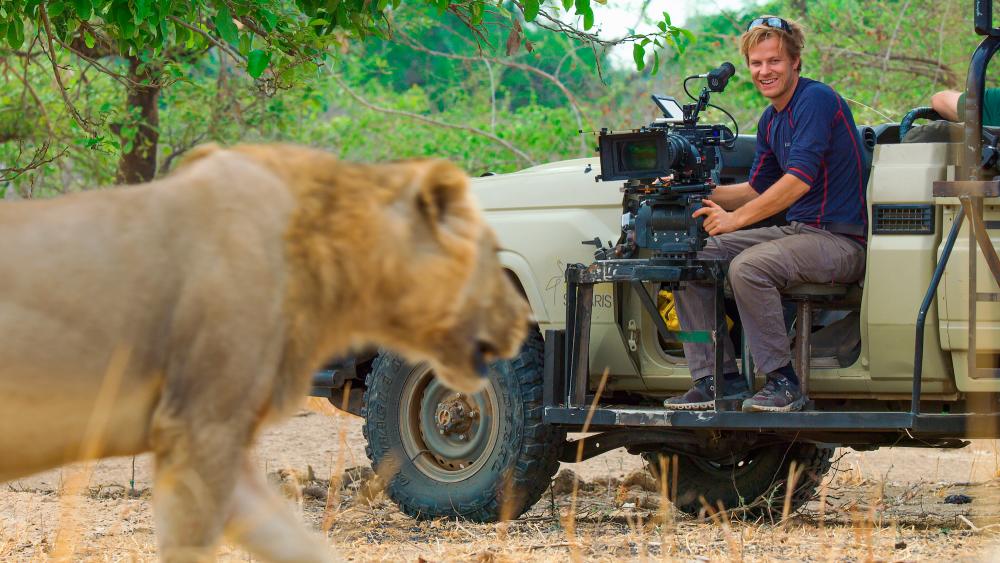 Gregory looks on as a male lion walks past the filming vehicle. – NATIONAL GEOGRAPHIC FOR DISNEY+

PUSHING the boundaries on traditional wildlife filmmaking is Bertie Gregory, a National Geographic explorer intent on merging the most current pieces of technology with wildlife storytelling.

theSun was fortunate to talk to Gregory about Epic Adventures with Bertie Gregory, the new Disney+ original series that was conceived from the young filmmaker’s goal of telling extraordinary, real-life animal stories by taking viewers with him for every beat of the action.

The five-episode series took around two years to complete, with Gregory traversing several different continents, from the rugged African terrain to the cold Antarctica.

“I think critical when we were assessing where we were going to go for this episode, we needed an unbelievable wildlife event,” Gregory said.

The BAFTA Award-winning cinematographer further explained that the team wanted something that had never been filmed in the past, and something that they could approach uniquely by utilising brand new technology.

“We also wanted to choose locations that had really interesting environmental stories, we can not only can show incredible wildlife behaviour, but also showcase environmental issues.”

The threats and challenges faced by the natural world are often overlooked in nature documentaries, and it was something Gregory and his team also kept in mind going into the series’ production.

“There are brilliant examples how when you give wildlife the chance, it will come back. The Antarctic fin whales are a perfect example of that,” Gregory pointed out.

“It was a really rare thing that we saw, in that it was a wildlife event that was happening now that is better than it has been for 50 or even 100 years. That is very rare, and that is thanks to the ban on commercial whaling.”

From traditional to modern

Throughout the five episodes, Gregory and his team deploy a multitude of sophisticated, current cutting edge technology in order to elevate the series from being “just another documentary” to something cinematic and up-to-date with the real world.

As for Gregory, he finds it imperative know about new technology, as it helps tell animal stories in new, exciting ways, such as drones and stabilised cameras.

“As many of the wildlife spectacles we’re trying to film happen at a large distance, and these animals move, we want to be able to move the camera with the animals so that the viewers really feel like they are a part of it,” he said.

This effort can be seen in the “Tracking Ocean Giants” episode, where Gregory filmed a fin whale gathering in Antartica.

“Seeing that from the water and low level is spectacular, but it’s really only when you get up into the air, that you realise the scale of the gathering; 300 fin whales all together, in a feeding frenzy with thousands of birds and penguins.”

What are the odds

The equipment Gregory and his team brought into the field comes with a hefty price tag, including the half a million dollar military-grade gyrostabilised camera the team are primarily carrying around.

In the traditional world of nature documentaries and filmmaking, the filmmakers’ lives are usually prized more than the actual equipment they bring into the field. But in this new world of drones and thousands of dollars worth of equipment, suddenly, the finances of the entire situation also have to be taken into consideration.

Questioned on how he weighs and assesses the risks of bringing high-end technology into the field, Gregory said it was more about pushing boundaries.

For instance, he pointed out that launching a drone off a sailboat in rough seas was very challenging, and it was probably the hardest place for him to pilot a drone.

“[Mitigating the risks involve] getting so much time on these pieces of equipment in benign situations, so that when its ‘Go, go, go!’ and it’s a hairy situation, all I’m thinking is ‘How do we do justice to [filming] this animal?’ and not ‘Is the technology going to work? How do I fly this drone?’

Gregory admits that they put these extremely expensive cameras in ridiculous situations, but they’re nonetheless taking care of them.

“We also work with massive teams, and with people who really know how to move in these landscapes without damaging humans or equipment”.

The ambitious Epic Adventures with Bertie Gregory airs on Disney+ Hotstar beginning today, and will take viewers from the cold waters of Antarctica to the temperamental terrains of Zambia. 1.Bento proud of S. Koreans, but steps down after defeat

5.Spurring optimism after being struck by blindness