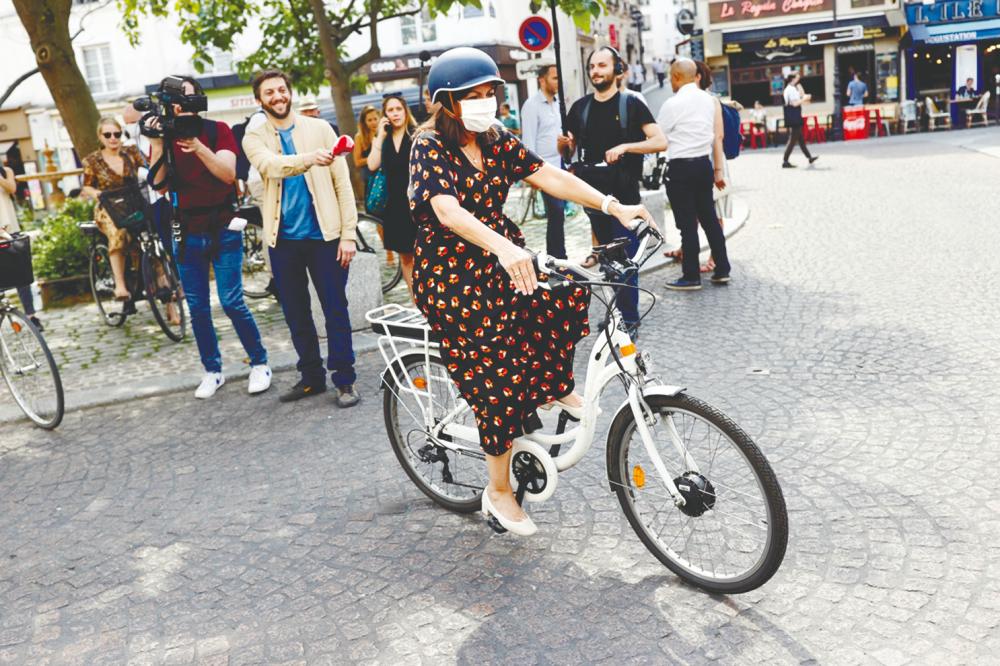 BIKES are booming across the globe as people seek to avoid crowded buses and trains for their daily commutes in the wake of the coronavirus pandemic – or get back into shape after long months of lockdown.

But with sales exploding in many countries, the current cycling craze has left manufacturers and retailers out-pedalled by demand.

In Paris, where mayor Anne Hidalgo has been working hard to put cycling on the map, vastly increasing the number of bike lanes in recent years, would-be buyers often have to wait weeks to get their hands on a brand new velocipede.

“For three or four weeks now, I’ve had a dozen or so clients waiting. And I’ve had to return money to a few because I simply have no idea when I’ll have bikes for them,” independent Paris retailer Federico Mosca told AFP.

One customer, 31-year-old Nicolas, said he had visited as many as eight different shops before getting lucky.

And even then, he was forced to bust his budget and buy a more expensive model than planned because the cheaper bike he wanted was sold out.

“I was looking for a specific bike and had given myself a month to buy one, but it’s not available anywhere,” he said.

Leading retail chain Decathlon said it too has waiting lists, but it can also refurbish second-hand bikes for more impatient customers.

French bike sales doubled in May and June compared to the same months last year, according to the sporting and cycling federation.

Sales are booming in most countries around the world.

Decathlon calculated that in Europe overall, sales “have increased two- and even three-fold”.

In China, demand has increased five-fold since lockdowns were eased.

And in the US, sales of bikes have exploded, with online purchases alone skyrocketing in May by 5,000% over the figure for the same month last year.

Overall US sales, both online and in-store, jumped by 81% year-on-year to US$1.1 billion (RM4.7 billion) in May, according to People for Bikes, a coalition of manufacturers and retailers.

But in addition to runaway demand from the end consumer, lockdowns have also made it difficult for European and US manufacturers to obtain parts.

The Confederation of the European Bicycle Industry (CONEBI) estimates that 45% to 50% of parts for all bikes sold in Europe are imported from Asia.

Moreno Fioravanti, secretary general of the European Bicycle Manufacturers’ Association (EBMA), said the industry has “lost three months of production of components, and our stockpiles were used up in only two months”.

Pancho Pimentel, marketing chief for Summit Bicycles, which has five stores in California, said “there are shortages everywhere, from bike brands to parts”.

Cycling “works off of a global supply chain that has been interrupted due to Covid-19 and its consequences are being seen in every category,” he said.

According to CONEBI, 7.3 million bikes and e-bikes were imported into Europe last year, principally from Taiwan and Cambodia. The world’s leading manufacturer, Taiwan-based Giant, saw European sales increase by 140% year-on-year in June, driven in particular by sales of e-bikes.

However, CONEBI’s director general, Manuel Marsilio, said the bike shortage was not as bad as some people might suggest. “There was some shortage because of two months of lockdown, due to the fact that EU production stopped,” he said.

“But our bike industry is working very hard to fill the gap. It is a very positive thing that we have so many small and medium-sized makers all over Europe, who are very flexible.

“Most EU producers will continue to work also in July and August, so there won’t be a halt in the summer,” he said. – AFP-Relaxnews