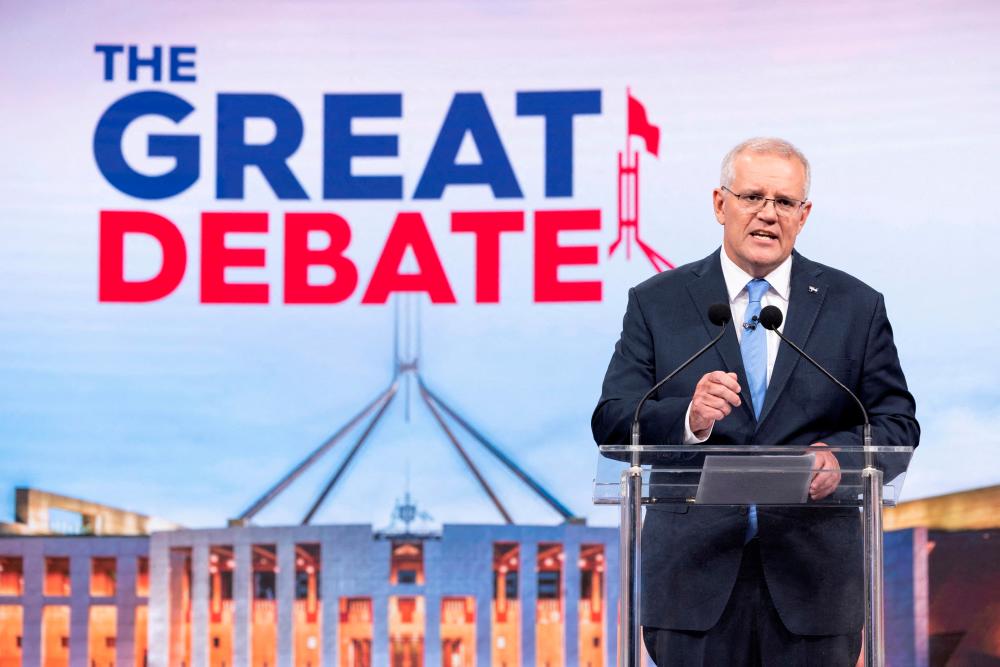 File photo: Australian Prime Minister Scott Morrison speaks during the second leaders' debate of the 2022 federal election campaign at the Nine studio in Sydney, Australia May 8, 2022. Alex Ellinghausen/Pool via REUTERSpix

SYDNEY: Australia’s ruling coalition on Tuesday pledged to fund A$2.3 billion ($1.60 billion) worth of its election promises by curbing public sector spending over the next four years, which it said would also further reduce the budget deficit.

“This is a sensible, practical measure ... that’s how you manage your budget, you live within your means,“ Morrison said during a media briefing.

Polls have showed the Morrison-led Liberal-National coalition trailing the main opposition Labor Party, while bookmakers announced odds had widened of centre-left Labor returning to power for the first time since 2013.

Asked by reporters whether the polls kept him up at night, Morrison replied: “No”. Trailing in polls is not new for Morrison, who carved out a narrow path to victory in 2019 defying poll predictions.

Morrison severely criticised Labor for not yet announcing plans to fund their campaign promises.

“How can you trust an opposition that says they want to take the reins of the Australian economy when they haven’t been prepared to share with you what their policies cost?” he said.

Labor said it was planning to release their projections on Thursday.

“The big issue in the economy is not the day that Labor releases the costing, it’s the cost of living crisis on Scott Morrison’s watch,“ shadow treasurer Jim Chalmers said.

Australia’s economy has recovered faster than anyone expected, with unemployment hitting 13-year lows of 4% earlier this year and is projected to soon reach levels last seen in the 1970s at 3.75%. But inflation has risen twice as fast as wages pushing real incomes into the red. 1.Flights cancelled in Spain due to Ryanair, EasyJet strikes

2.Kerry vows US to meet climate goal despite court setback