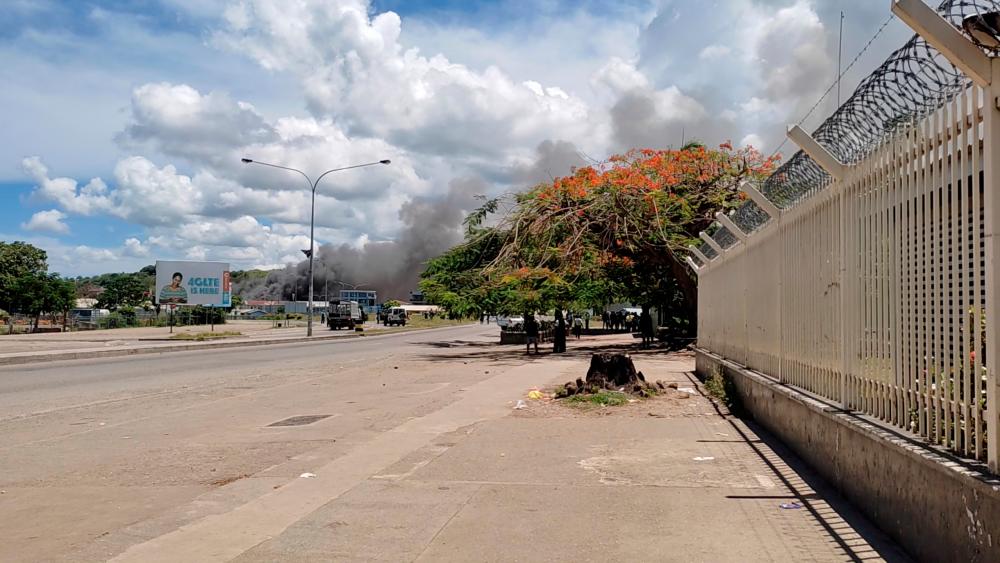 Smoke is seen after buildings were set on fire in Chinatown, as Solomon Islanders defied a government-imposed lockdown and protested in the capital, in Honiara, Solomon Islands November 25, 2021, in this still image taken from video provided on social media. Georgina Kekea/via REUTERSpix

The Ministry of Health said in a statement that city clinics were closed and urged “all Honiara residents involved in arson, rioting, looting to please stop immediately” after its ambulances were stoned.

Tear gas was deployed in Chinatown where looting and the burning of buildings had continued on Friday morning, a resident told Reuters.

A night curfew would begin at 7pm, the Royal Solomon Islands Police Force said in a statement.

Prime Minister Manasseh Sogavare, who requested help from Australia, on Friday blamed foreign countries for stoking the violent protests, but did not name any.

Many of the protesters come from the most populous province Malaita and feel overlooked by the government in Guadalcanal province and oppose its 2019 decision to end diplomatic ties with Taiwan and establish formal links with China.

Malaita premier Daniel Suidani said in a statement this week that Sogavare had “elevated the interest of foreigners above those of Solomon Islanders” and should resign.

“I feel sorry for my people in Malaita because they are fed with false and deliberate lies about the switch,“ Sogavare told the Australian Broadcasting Corporation.

China and Taiwan have been rivals in the South Pacific for decades with some island nations switching allegiances.

China views Taiwan as a wayward province with no right to state-to-state ties, which the government in Taipei hotly disputes. Only 15 countries maintain formal diplomatic ties with Taiwan. The last two to ditch Taipei in favour of Beijing were the Solomon Islands and Kiribati in September 2019.

Taiwan Foreign Ministry spokeswoman Joanne Ou said in a statement to Reuters: “We have nothing to do with the unrest”.

“The scenes here are really chaotic. It is like a war zone,“ Aqorau told Reuters by telephone on Friday morning.

“There is no public transport and it is a struggle with the heat and the smoke. Buildings are still burning.”

He said later Australian police were “taking control of Chinatown”.

Australian Foreign Minister Marise Payne said Australia was sending 100 police personnel and was “clearly focused on stability in our region”.

Australian police were previously deployed to the Solomon Islands in 2003 under a peace keeping mission authorised by a Pacific Island Forum declaration and stayed for a decade.

Severe internal unrest and armed conflict from 1998 to 2003 involved militant groups from Guadalcanal and the neighbouring island of Malaita, and fighting on the outskirts of Honiara. — Reuters