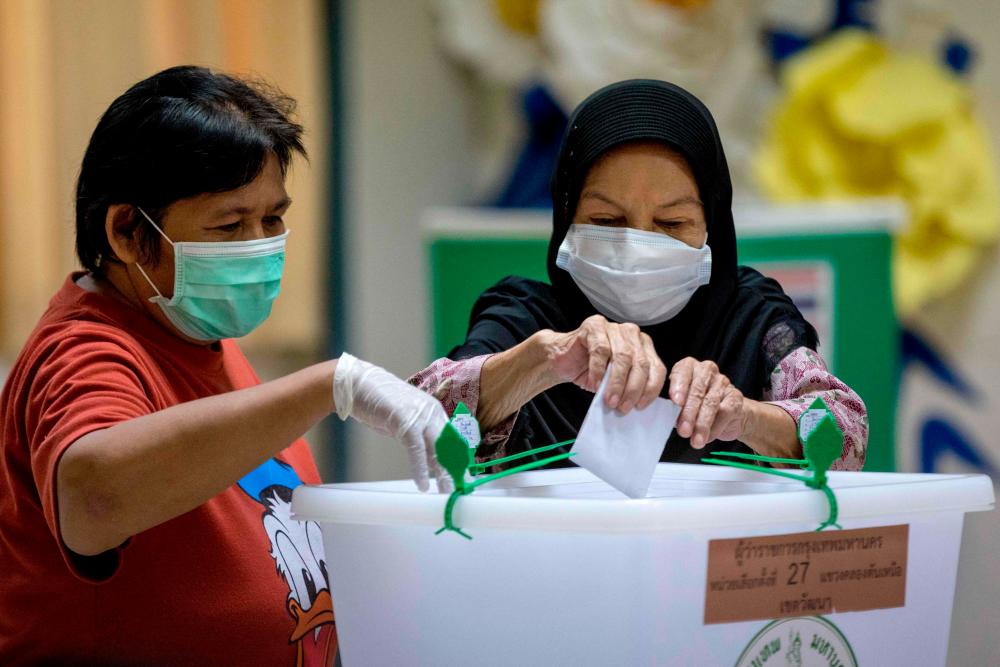 A woman casts her vote in the governor elections in Bangkok on May 22, 2022. AFPPIX

BANGKOK: Bangkok went to the polls Sunday in its first governor election in almost a decade, with the ballot viewed as an indicator for a national vote expected within a year.

Around four million people are eligible to vote in the first major poll since Thailand's huge youth-led street protests in 2020 demanding political change and reform to the once-untouchable monarchy.

But daily life rather than politics has dominated the candidates' campaigns, with the leading contenders promising to clear up the congested, polluted and noisy megapolis home to 10 million.

Polling centres opened across Bangkok at 8:00 am (0100 GMT) -- closing at 5:00 pm -- with temperature checks and Covid-19 restrictions at each voting station.

“I am not excited about the election. It will hardly change Bangkok, but I vote for a person who I think can change Bangkok, though a little bit. I do hope this candidate will make some change,“ said 28-year-old Nat, who gave only his nickname, after he voted.

A record 30 candidates are in the running for the top job, throwing their names into the hat eight years after the 2014 coup saw local elections scrapped and the city run by government-appointed leaders.

The ex-transport minister in the government ousted in the last coup has promised to tackle the city's notorious traffic, as well as making numerous green pledges, and insisted voters want a change from the entrenched political divisions.

He is facing off against incumbent Aswin Kwanmuang, a former police general backed by Prime Minister Prayut Chan-O-Cha, who has also promised to fix the city's perennial flooding issues.

But his poor record on the issue -- after just under six years as governor -- saw him endure criticism after parts of Bangkok flooded earlier this week following heavy rains.

Political analyst Thitinan Pongsudhirak of Chulalongkorn University said the outcome would give some idea of the capital's willingness to back candidates of the royalist and military establishment that dominates Thai politics.

“Bangkok is not Thailand, but the Bangkok governor election this time will be a bellwether for bigger polls to come,“ he told AFP this week.

Results are not formally expected until late Sunday evening and will have to be ratified by the country's electoral commission. - AFP